Tombelaine and Mont Saint Michel (to the right) 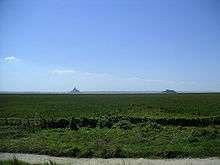 Tombelaine and Mont Saint Michel seen from the saltmarsh

According to popular etymology the name means "the tomb of Hélène", from a princess named Hélène, daughter of King Hoël, said to have been buried on the rock.

The name could also come from tumulus belenis, the "tumulus of Belenos", a Celtic god, or from Celtic words meaning "the little mountain", in contrast with Mont St-Michel.[2]

In the 11th century, two monks from Mont Saint-Michel were hermits on Tombelaine. In 1137 Bernard du Bec founded a priory on the island, and it became a place of pilgrimage.

On 11 February 1423, in the Hundred Years War, Tombelaine was occupied by the English as a base to attack Mont Saint-Michel. In the 16th-century French religious wars, Gabriel, comte de Montgomery, leader of the Huguenot armies, occupied the island.

In 1666 the marquis de la Chastrière ordered the destruction of the island's fortifications, in case they were again used by the English.