For other uses, see Totem (disambiguation).

A totem (Ojibwe dodaem) is a spirit being, sacred object, or symbol that serves as an emblem of a group of people, such as a family, clan, lineage, or tribe.

While the term "totem" is Ojibwe, belief in tutelary spirits and deities is not limited to indigenous peoples of the Americas but common to a number of cultures worldwide, such as Africa, Arabia, Asia, Australia, Europe, and the Arctic. However, the traditional people of those cultures have words for their guardian spirits in their own languages, and do not call these spirits or symbols, "totems".

Contemporary neoshamanic, New Age and mythopoetic men's movements not otherwise involved in the practice of a tribal religion may misappropriate and use "totem" terminology for the personal identification with a tutelary spirit or guide.[1][2] 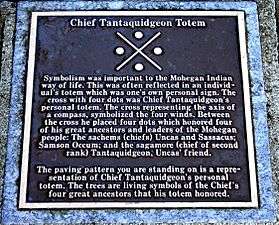 Personal Totem of Mohegan Chief Tantaquidgeon, commemorated on a plaque at Norwich, Connecticut.

Totem poles of the Pacific Northwest of North America are monumental poles of heraldry. They feature many different designs (bears, birds, frogs, people, and various supernatural beings and aquatic creatures) that function as crests of families or chiefs. They recount stories owned by those families or chiefs, and/or commemorate special occasions.[3][4]

Totemism is a belief associated with animistic religions. The totem is usually an animal or other natural figure that spiritually represents a group of related people such as a clan.

Scottish ethnologist John Ferguson McLennan, following the vogue of 19th-century research, addressed totemism in a broad perspective in his study The Worship of Animals and Plants (1869, 1870).[5][6] McLennan did not seek to explain the specific origin of the totemistic phenomenon but sought to indicate that all of the human race had in ancient times gone through a totemistic stage.[5]

Another Scottish scholar, Andrew Lang, early in the 20th century advocated a nominalistic meaning for totemism, namely that local groups or clans, in selecting a totemistic name from the realm of nature, were reacting to a need to be differentiated.[7] If the origin of the name was forgotten, Lang argued, there followed a mystical relationship between the object — from which the name was once derived — and the groups that bore these names. Through nature myths animals and natural objects were considered as the relatives, patrons, or ancestors of the respective social units.[7]

British anthropologist Sir James George Frazer published Totemism and Exogamy in 1910, a four volume work based largely on his research among Indigenous peoples of Australia and Melanesia, along with a compilation of the work of other writers in the field.[8]

The founder of a French school of sociology, Émile Durkheim, examined totemism from a sociological and theological point of view, attempting to discover a pure religion in very ancient forms and claimed to see the origin of religion in totemism.[10]

The leading representative of British social anthropology, A. R. Radcliffe-Brown, took a totally different view of totemism; he was skeptical that totemism could be described in any unified way, and took the point of view that nature is introduced into the social order rather than secondary to it.[11]

As a chief representative of modern structuralism, French ethnologist Claude Lévi-Strauss, and his, Le Totémisme aujourd'hui ("Totemism Today" [1958])[12] are often cited in the field.