Hindu denominations are traditions within Hinduism centered on one or more gods or goddesses, such as Shiva, Vishnu and Brahma.[1] Sometimes the term is used for sampradayas led by a particular guru with a particular philosophy.[2]

Hinduism has no central doctrinal authority and many practising Hindus do not claim to belong to any particular denomination or tradition.[3] Four major traditions are, however, used in scholarly studies: Vaishnavism, Shaivism, Shaktism and Smartism.[1][4][5] These are sometimes referred to as the denominations of Hinduism, and they differ in the primary deity at the center of the tradition.[6] A notable feature of Hindu denominations is that they do not deny other concepts of the divine or deity, and often celebrate the other as henotheistic equivalent.[7] The denominations of Hinduism, states Lipner, are unlike those found in major religions of the world, because Hindu denominations are fuzzy with individuals practicing more than one, and he suggests the term "Hindu polycentrism".[8]

Although Hinduism contains many denominations and philosophies, it is linked by shared concepts, recognisable rituals, cosmology, shared textual resources, pilgrimage to sacred sites and the questioning of authority.[9]

Hindus subscribe to a diversity of ideas on spirituality and traditions, but have no ecclesiastical order, no unquestionable religious authorities, no governing body, no prophet(s) nor any binding holy book; Hindus can choose to be polytheistic, pantheistic, monotheistic, monistic, agnostic, atheistic or humanist.[10][11][12]

Hinduism as it is commonly known can be subdivided into a number of major currents. Of the historical division into six darsanas (philosophies), two schools, Vedanta and Yoga, are currently the most prominent.[13] Classified by primary deity or deities, four major Hinduism modern currents are Vaishnavism (Vishnu), Shaivism (Shiva), Shaktism (Devi) and Smartism (five deities treated as same).[5][14] These deity-centered denominations feature a synthesis of various philosophies such as Samkhya, Yoga and Vedanta, as well as shared spiritual concepts such as moksha, dharma, karma, samsara, ethical precepts such as ahimsa, texts (Upanishads, Puranas, Mahabharata, Agamas), ritual grammar and rites of passage.[9][15]

McDaniel (2007) distinguishes six generic "types" of Hinduism, in an attempt to accommodate a variety of views on a rather complex subject:[16]

In Hinduism, a sampradaya (IAST sampradāya) is a denomination.[17] These are teaching traditions with autonomous practices and monastic centers, with a guru lineage, with ideas developed and transmitted, redefined and reviewed by each successive generation of followers.[18] A particular guru lineage is called parampara. By receiving diksha (initiation) into the parampara of a living guru, one belongs to its proper sampradaya. 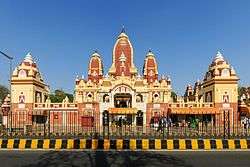 The Birla Mandir is one of the most famous Vaishnavite temples in India.
Main article: Vaishnavism

Vaishnavism (also called Vishnuism) is the tradition worshiping Vishnu (or his forms of Krishna and Rama) as the supreme or Svayam Bhagavan. Vaishnavism is the sect within Hinduism that worships Vishnu, the preserver god of the Hindu Trimurti ('three images', the Trinity), and his ten incarnations. It is a devotional sect, and followers worship many deities, including Ram and Krishna, both thought to be incarnations of Vishnu. The adherents of this sect are generally non-ascetic, monastic and devoted to meditative practice and ecstatic chanting.[19] Vaishnavites are deeply devotional. Their religion is rich in saints, temples and scriptures.[20]

Other Vaishnava schools and the principal teachers connected with them are:

Shaivas or Shaivites are those who primarily worship Shiva as the supreme god, both immanent and transcendent. Shaivism embraces at the same time monism (specifically nondualism) and dualism. To Shaivites, Shiva is both with and without form; he is the Supreme Dancer, Nataraja; and is linga, without beginning or end. Shiva is sometimes depicted as the fierce god Bhairava. Saivists are more attracted to asceticism than adherents of other Hindu sects, and may be found wandering India with ashen faces performing self-purification rituals.[19] They worship in the temple and practice yoga, striving to be one with Siva within.[20]

The major schools of Śaivism include: 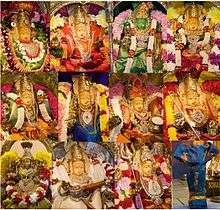 Shaktas worship goddess as Mother Shakti, in different forms. These forms may include Kali, Durga, Laxmi, and Saraswati. The branch of Hinduism that worships the goddess, known as Devi, is called Shaktism. Followers of Shaktism recognize Shakti as the power that underlies the male principle, and Devi is often depicted as Parvati the consort of Shiva or as Lakshmi the consort of Vishnu. She is also depicted in other guises, such as the fierce Kali or Durga. Shaktism is closely related with Tantric Hinduism, which teaches rituals and practices for purification of the mind and body.[19]

Animal sacrifice of cockerels, goats and to a lesser extent water buffalos is practiced by Shakti devotees, mainly at temples of Goddesses such as Bhavani or Kali.[27][28] 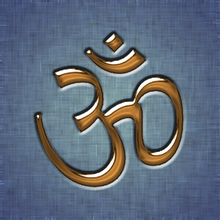 Smartas treat all deities as same, and their temples include five deities (Pancopasana) or Panchadevata as personal saguna (divine with form) manifestation of the nirguna (divine without form) Absolute, the Brahman. Smartas include (Ganesha, Shiva, Shakti, Vishnu, Surya, and sometimes others such as Skanda).[19] The choice of the nature of God is up to the individual worshiper since different manifestations of God are held to be equivalent. It is nonsectarian. Smarta belief includes Advaita Vedanta beliefs. Generally Smartas worship the Supreme in one of six forms: Ganesha, Siva, Sakti, Vishnu, Surya and Skanda. Because they accept all the major Hindu Gods, they are known as liberal or nonsectarian. They follow a philosophical, meditative path, emphasizing man's oneness with God through understanding.[20]

The movement is credited to Shankara (~8th century CE), who is regarded as the greatest teacher[29][30] and reformer of the Smartha.[31][30] According to Hiltebeitel, Shankara established the nondualist interpretation of the Upanishads as the touchstone of a revived smarta tradition.[32] The Sringeri Sharada monastery founded by Adi Shankara Acharya in Karnataka is still the centre of the Smarta sect.[29][30]

Halbfass states that, although traditions such as Shaivism and Vaishaism may be regarded as "self-contained religious constellations",[33] there is a degree of interaction and reference between the "theoreticians and literary representatives"[33] of each tradition which indicates the presence of "a wider sense of identity, a sense of coherence in a shared context and of inclusion in a common framework and horizon".[33] It is common to find Hindus revering Shiva, Vishnu and Shakti, and celebrating festivals related to them at different times of the year. Temples often feature more than one of them, and Hinduism is better understood as polycentric theosophy that leaves the choice of deity and ideas to the individual.[8]

Shrauta communities are very rare in India, the most well known being the ultra-orthodox Nambudiri Brahmins of Kerala. They follow the "Purva-Mimamsa" (earlier portion of Vedas) in contrast to Vedanta followed by other Brahmins. They place importance on the performance of Vedic Sacrifice (Yajna). The Nambudiri Brahmins are famous for their preservation of the ancient Somayaagam, Agnicayana rituals which have vanished in other parts of India.

The Suryaites or Sauras are followers of a Hindu denomination that started in Vedic tradition, and worship Surya as the main visible form of the Saguna Brahman. The Saura tradition was influential in South Asia, particularly in the west, north and other regions, with numerous Surya idols and temples built between 800 to 1000 CE.[34][35] The Konark Sun Temple was built in mid 13th century.[36] During the iconoclasm of Islamic invasions and Hindu-Muslim wars, the temples dedicated to Sun-god were among those desecrated, images smashed and the resident priests of Saura tradition were killed, states André Wink.[37][38] The Surya tradition of Hinduism declined in the 12th and 13th century CE and today remains as a very small movement.

Ganapatism is a Hindu denomination in which Lord Ganesha is worshipped as the main form of the Saguna Brahman. This sect was widespread and influential in the past and has remained important in Maharashtra.

Kaumaram is a sect of Hindus, especially found in South India and Sri Lanka where Lord Muruga Karttikeya is the Supreme Godhead. Lord Muruga is considered superior to the Trimurti. The worshippers of Lord Muruga are called Kaumaras.

Hinduism flourished on the island of Java and Sumatra until the late 16th century, when a vast majority of the population converted by will or force to Islam. Only the Balinese people who formed a majority on the island of Bali, retained this form of Hinduism over the centuries. Theologically, Balinese or Indonesian Hinduism is closer to Shaivism than to other major sects of Hinduism. The adherents consider Acintya the supreme god, and all other gods as his manifestations.

The term "Agama Hindu Dharma", the endonymous Indonesian name for "Indonesian Hinduism" can also refer to the traditional practices in Kalimantan, Sumatra, Sulawesi and other places in Indonesia, where people have started to identify and accept their agamas as Hinduism or Hindu worship has been revived. The revival of Hinduism in Indonesia has given rise to a national organisation, the Parisada Hindu Dharma.

The new movements that arose in the 19th to 20th century include:

Slavic Vedism, Slavic Hinduism, or Neo-Vedism or simply Vedism[39][40] are terms used to describe the contemporary indigenous development of Vedic forms of religion in Russia, Siberia, other Slavic countries, the Commonwealth of Independent States' members and generally all the post-Soviet states.

Slavic Vedism involves the use of Vedic rituals and worship of ancient Vedic deities, distinguishing from other groups which have maintained a stronger bond with modern Indian Hinduism, although Krishnaite groups often identify themselves as "Vedic" too. Also some syncretic groups within Rodnovery (Slavic Neopaganism) use the term "Vedism"[41][42] and worship Vedic gods, but mainstream Rodnovery is characterised by its use of indigenous Slavic rituals and Slavic names for the gods.

Jñāna is a Sanskrit word that means knowledge. In Vedas it means true knowledge, that (atman) is identical with Brahman. It is also referred to as Atma Jnana which is frequently translated as self-realization.

The Bhakti movement was a theistic devotional trend that originated in the seventh-century Tamil south India (now parts of Tamil Nadu and Kerala), and spread northwards.[43] It swept over east and north India from the fifteenth-century onwards, reaching its zenith between the 15th and 17th century CE.[43] The Bhakti movement regionally developed as Hindu denominations around different gods and goddesses, such as Vaishnavism (Vishnu), Shaivism (Shiva), Shaktism (Shakti goddesses), and Smartism.[1][6][44] The movement was inspired by many poet-saints, who championed a wide range of philosophical positions ranging from theistic dualism of Dvaita to absolute monism of Advaita Vedanta.[43][45] Scriptures of the Bhakti movement include the Bhagavad Gita, Bhagavata Purana and Padma Purana.[46][47]

As part of the legacy of the Alvars, five Vaishnava philosophical traditions (sampradayas) has developed at the later stages.[48]

Hindu philosophy is traditionally divided into six āstika (Sanskrit: आस्तिक "orthodox") schools of thought,[49] or darśanam (दर्शनम्, "view"), which accept the Vedas as the supreme revealed scriptures. The schools are:

The nāstika schools are (in chronological order):

However, medieval philosophers like Vidyāraṇya classified Indian philosophy into sixteen schools, where schools belonging to Saiva, Pāṇini and Raseśvara thought are included with others, and the three Vedantic schools Advaita, Vishishtadvaita and Dvaita (which had emerged as distinct schools by then) are classified separately.[50]

In Hindu history, the distinction of the six orthodox schools was current in the Gupta period "golden age" of Hinduism. With the disappearance of Vaisheshika and Mimamsa, it was obsolete by the later Middle Ages, when the various sub-schools of Vedanta (Dvaita "dualism", Advaita Vedanta "non-dualism" and others) began to rise to prominence as the main divisions of religious philosophy. Nyaya survived into the 17th century as Navya Nyaya "Neo-Nyaya", while Samkhya gradually lost its status as an independent school, its tenets absorbed into Yoga and Vedanta.