Transposition of the great vessels 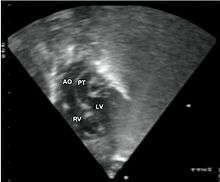 Subcostal echocardiographic view showing discordant ventriculoarterial connections together with the presence of parallel, rather than crossing, great arteries arising from the ventricles. 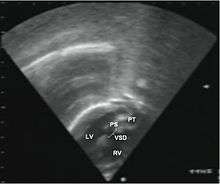 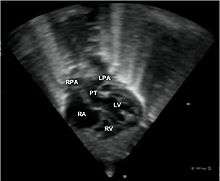 Transposed vessels can present a large variety of atriovenous, ventriculoarterial and/or arteriovenous discordance. The effects may range from a change in blood pressure to an interruption in circulation, depending on the nature and degree of the misplacement and which vessels are involved.

Although "transposed" literally means "swapped", many types of TGV involve vessels that are in abnormal positions, while not actually being swapped with each other. The terms TGV and TGA are most commonly used in reference to dextro-TGA – in which the arteries are in swapped positions; however, both terms are also commonly used, though to a slightly lesser extent, in reference to levo-TGA – in which both the arteries and the ventricles are swapped; while other defects in this category are almost never referred to by either of these terms.

Dextro-Transposition of the great arteries 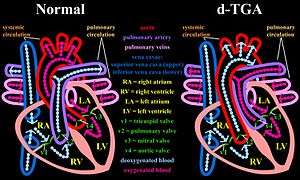 In dextro-Transposition of the great arteries (dextro-TGA) deoxygenated blood from the right heart is pumped immediately through the aorta and circulated to the body and the heart itself, bypassing the lungs altogether, while the left heart pumps oxygenated blood continuously back into the lungs through the pulmonary artery. In effect, two separate "circular" (parallel) circulatory systems are created. It is called a cyanotic congenital heart defect (CHD) because the newborn infant turns blue from lack of oxygen.

Levo-Transposition of the great arteries

Levo-Transposition of the great arteries is an acyanotic heart defect in which the primary arteries are transposed, with the aorta anterior and to the left of the pulmonary artery, and the morphological left and right ventricles with their corresponding atrioventricular valves are also transposed. The systemic and the pulmonary circulation are connected. Complications arise from the fact that the right ventricle, which is designed for pumping blood into the low pressure pulmonary circulation, is being tasked with pumping blood at a much higher pressure against the high resistance of the systemic circulation.

In many cases, TGV is accompanied by other heart defects, the most common type being intracardiac shunts such as atrial septal defect including patent foramen ovale, ventricular septal defect, and patent ductus arteriosus. Stenosis, or other defects, of valves and/or vessels may also be present.

Preexisting diabetes mellitus of a pregnant mother is a risk factor that has been described for the fetus having TGV.[1] 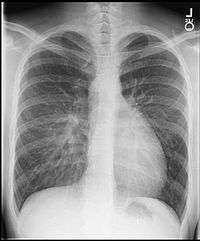 On chest X-ray, transposition of the great vessels typically shows a cardio-mediastinal silhouette appearing as an "egg on a string", wherein in which the enlarged heart represents an egg on its side and the narrowed, atrophic thymus of the superior mediastinum represents the string.[2]

For newborns with transposition, prostaglandins can be given to keep the ductus arteriosus open which allows mixing of the otherwise isolated pulmonary and systemic circuits. Thus oxygenated blood that recirculates back to the lungs can mix with blood that circulates throughout the body. The arterial switch operation is the definitive treatment for dextro- transposition. Rarely the arterial switch is not feasible due to particular coronary artery anatomy and an atrial switch operation is preferred.

TGV was first described in 1797 by Matthew Baillie.[3]