The aorta (/eɪˈɔːrtə/) is the main artery in the human body, originating from the left ventricle of the heart and extending down to the abdomen, where it splits into two smaller arteries (the common iliac arteries). The aorta distributes oxygenated blood to all parts of the body through the systemic circulation.[1] 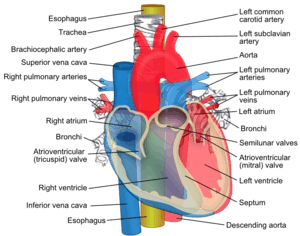 In anatomical sources, the aorta is usually divided into sections.[2][3][4][5]

Another system divides the aorta with respect to its course and the direction of blood flow. In this system, the aorta starts as the ascending aorta then travels superiorly from the heart and then makes a hairpin turn known as the aortic arch. Following the aortic arch, the aorta then travels inferiorly as the descending aorta. The descending aorta has two parts. The aorta begins to descend in the thoracic cavity, and consequently is known as the thoracic aorta. After the aorta passes through the diaphragm, it is known as the abdominal aorta. The aorta ends by dividing into two major blood vessels, the common iliac arteries and a smaller midline vessel, the median sacral artery.[6]:18

The ascending aorta begins at the opening of the aortic valve in the left ventricle of the heart. It runs through a common pericardial sheath with the pulmonary trunk. These two blood vessels twist around each other, causing the aorta to start out posterior to the pulmonary trunk, but end by twisting to its right and anterior side.[7]:191,204 The transition from ascending aorta to aortic arch is at the pericardial reflection on the aorta.[8]:Plate 211

The aortic arch ends and the descending aorta begins at the level of the intervertebral disc between the fourth and fifth thoracic vertebrae.[7]:209

The abdominal aorta gives rise to lumbar and musculophrenic arteries, renal and middle suprarenal arteries, and visceral arteries (the celiac trunk, the superior mesenteric artery and the inferior mesenteric artery). It ends in a bifurcation into the left and right common iliac arteries. At the point of the bifurcation, there also springs a smaller branch, the median sacral artery.[9]:331

The ascending aorta develops from the outflow tract which initially starts as a single tube connecting the heart with the aortic arches (which will form the great arteries) in early development, but then is separated into the aorta and the pulmonary trunk.

The aortic arches start as five pairs of symmetrical arteries connecting the heart with the dorsal aorta, and then undergo a significant remodelling[10] to form the final asymmetrical structure of the great arteries, with the 3rd pair of arteries contributing to the common carotids, the right 4th forming the base and middle part of the right subclavian artery and the left 4th being the central part of the aortic arch. The smooth muscle of the great arteries and the population of cells that form the aorticopulmonary septum that separates the aorta and pulmonary artery is derived from cardiac neural crest. This contribution of the neural crest to the great artery smooth muscle is unusual as most smooth muscle is derived from mesoderm. In fact the smooth muscle within the abdominal aorta is derived from mesoderm, and the coronary arteries, which arise just above the semilunar valves, possess smooth muscle of mesodermal origin. A failure of the aorticopulmonary septum to divide the great vessels results in persistent truncus arteriosus. 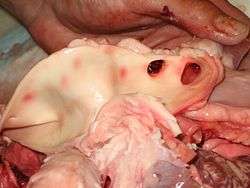 The aorta is an elastic artery, and as such is quite distensible. The aorta consists of a heterogeneous mixture of smooth muscle, nerves, intimal cells, endothelial cells, fibroblast-like cells, and a complex extracellular matrix. The vascular wall consists of several layers known as the tunica externa, tunica media, and tunica intima. The thickness of the aorta requires an extensive network of tiny blood vessels called vasa vasorum, which feed the tunica externa and tunica media outer layers of the aorta.[11] The aortic arch contains baroreceptors and chemoreceptors that relay information concerning blood pressure and blood pH and carbon dioxide levels to the medulla oblongata of the brain. This information is processed by the brain and the autonomic nervous system mediates the homeostatic responses.

Variations in the branching of individual arteries may also occur. For example, the left vertebral artery may arise from the aorta, instead of the left common carotid artery.[9]:188 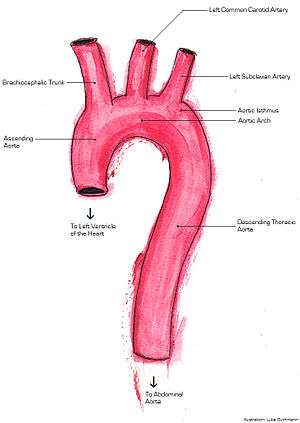 The pulsatile nature of blood flow creates a pulse wave that is propagated down the arterial tree, and at bifurcations reflected waves rebound to return to semilunar valves and the origin of the aorta. These return waves create the dicrotic notch displayed in the aortic pressure curve during the cardiac cycle as these reflected waves push on the aortic semilunar valve.[14] With age, the aorta stiffens such that the pulse wave is propagated faster and reflected waves return to the heart faster before the semilunar valve closes, which raises the blood pressure. The stiffness of the aorta is associated with a number of diseases and pathologies, and noninvasive measures of the pulse wave velocity are an independent indicator of hypertension. Measuring the pulse wave velocity (invasively and non-invasively) is a means of determining arterial stiffness. Maximum aortic velocity may be noted as Vmax or less commonly as AoVmax.

Mean arterial pressure (MAP) is highest in the aorta and the MAP decreases across the circulation from aorta to arteries to arterioles to capillaries to veins back to atrium. The difference between aortic and right atrial pressure accounts for blood flow in the circulation.[15] When the left ventricle contracts to force blood into the aorta, the aorta expands. This stretching gives the potential energy that will help maintain blood pressure during diastole, as during this time the aorta contracts passively. This Windkessel effect of the great elastic arteries has important biomechanical implications. The elastic recoil helps conserve the energy from the pumping heart and smooth out the pulsatile nature created by the heart. Aortic pressure is highest at the aorta and becomes less pulsatile and lower pressure as blood vessels divide into arteries, arterioles, and capillaries such that flow is slow and smooth for gases and nutrient exchange.

All amniotes have a broadly similar arrangement to that of humans, albeit with a number of individual variations. In fish, however, there are two separate vessels referred to as aortas. The ventral aorta carries de-oxygenated blood from the heart to the gills; part of this vessel forms the ascending aorta in tetrapods (the remainder forms the pulmonary artery). A second, dorsal aorta carries oxygenated blood from the gills to the rest of the body, and is homologous with the descending aorta of tetrapods. The two aortas are connected by a number of vessels, one passing through each of the gills. Amphibians also retain the fifth connecting vessel, so that the aorta has two parallel arches.[18]

The word 'Aorta' stems from the Late Latin Latin: aorta from aortē (Greek: ἀορτή), from aeirō, "I lift, raise" (Greek: ἀείρω)[19] This term was first applied by Aristotle when describing the aorta and describes accurately how it seems to be 'suspended' above the heart. [20]

The function of the aorta has been documented in the Talmud, where it is noted as one of three major vessels entering or leaving the heart, and where perforation is linked to death.[21]