Pronunciation of the In nomine in Latin

The trinitarian formula is the phrase "in the name of the Father, and of the Son, and of the Holy Spirit" (original Greek εἰς τὸ ὄνομα τοῦ Πατρὸς καὶ τοῦ Υἱοῦ καὶ τοῦ Ἁγίου Πνεύματος, eis to onoma tou Patros kai tou Huiou kai tou Hagiou Pneumatos, or in Latin in nomine Patris et Filii et Spiritus Sancti), or words to that form and effect referring to the three persons of the Christian Trinity. It is often followed by an "Amen".

These words are quoted from a command of the risen Jesus in the Great Commission: "Go, therefore, and make disciples of all nations, baptizing them in the name of the Father, and of the Son, and of the holy Spirit" (Matthew 28:19); a small minority of other translations read, "into the name".[1]

According to the doctrines of Roman Catholicism, Eastern Orthodoxy, Anglicanism and most forms of Protestantism, a baptism is not valid if the Trinitarian formula is not used in the administration of that sacrament. Consequently, they may not recognize religious communities that baptize without this formula – e.g. Unitarians, Branhamists, Frankists, Jehovah's Witnesses, and Oneness Pentecostals, all of whom deny the Trinity – as Christian religions. This is also the case with baptisms within The Church of Jesus Christ of Latter-day Saints (LDS church). Although LDS members baptize with the same Trinitarian formula, they reject the Nicene Trinitarian conception and regard the three Persons of the Trinity as being distinct gods or "divine personages", united not in substance, but in dominion and purpose.[2] Other faiths (Frankists, Oneness Pentecostals and Branhamists in particular) use the formula "In the name of Jesus Christ" (based on Acts 2:38) for baptism, and in turn re-baptize converts who were first baptized under the Trinitarian formula, sometimes claiming that such persons would not have been previously aware that "Jesus is the Lord".

Together with baptism, the Trinitarian formula is used in other prayers, rites, liturgies, and sacraments. One of its most common uses apart from baptism is when Roman Catholics, Eastern and Oriental Orthodox, Anglicans, Lutherans, Methodists, and others make the sign of the cross while reciting the formula.

Some scholars of the Greek New Testament and of the historical Jesus, both liberal and conservative, regard the trinitarian formula as an early Christian elaboration. Biblical scholars from the controversial Jesus Seminar, a group of textual critics (including figures like Robert W. Funk, John Dominic Crossan, Marcus Borg, Bruce D. Chilton, and John S. Kloppenborg), have said that the whole of Matthew chapter 28 is the result of later editorial work on the Gospels and was never uttered by Jesus or his immediate disciples. Luke Timothy Johnson, a frequent critic of the methodologies of the Jesus Seminar, says in his book The Writings of the New Testament: An Interpretation that his research affirms a view of Matthew 28:19 as apocryphal.

While denying that Jesus spoke the formula, these scholars acknowledge that the verse does represent Trinitarian ideas in the early Christian church. Most Christians belong to denominations that recognize church history as at least partially inspired by the Holy Spirit, so they tend to see the formula as valid even if not spoken by Jesus himself. However, the formula does not necessarily endorse the specific Nicene Trinitarian doctrine adopted at the 4th-century Council of Nicea and elaborated upon by later councils, and does not necessarily show that 1st-century Christians believed in the mysterious unity, equality, or co-eternity of the Father, Son, and Holy Spirit.

Other scholars have challenged the work of the Jesus Seminar, arguing that those working on the project began with a conclusion and worked to justify it through their research and exegesis.[3] 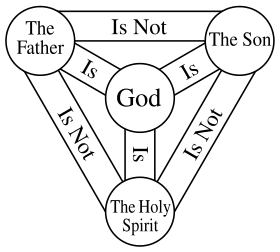 The "Shield of the Trinity" or "Scutum Fidei" diagram of traditional Western Christian symbolism.