Trinity Washington University is a Roman Catholic university located in Washington, D.C. across from The Catholic University of America and the Dominican House of Studies and under the trusteeship of the Sisters of Notre Dame de Namur. Although it has been a university since September 10, 2004, Trinity Washington University's College of Arts & Sciences undergraduate program maintains its original status as a liberal arts women's college. Men are accepted into the School of Education and the School of Professional Studies at both the undergraduate and graduate levels.

Trinity College (not to be confused with the unrelated Trinity College (Connecticut) or Trinity College, Dublin) was founded by the Sisters of Notre Dame de Namur in 1897 as a Catholic college for women. For over 70 years, Trinity educated middle-class Catholic women, who were underrepresented in America's colleges.[1] (For more background on women's higher education, see Origins and types of Women's colleges in the United States.) Trinity Washington University's colors are Royal Purple and Gold.

In the 1960s, the school vied with Wellesley College and Bryn Mawr College for the daughters of the wealthy and powerful. But when many all-male colleges became co-ed, Trinity's full-time enrollment dropped - from 1,000 in 1969 to 300 in 1989. The school's 12th president, Sister Donna Jurick, responded in the early 1980s by opening a weekend college for working women from the District of Columbia, a racially diverse population the school had previously not served. The first such program in Washington, it became very popular; within three years, it had more students than the undergraduate program.[2]

Under Patricia McGuire, a Trinity alumna, who became president of the college in 1989, Trinity became a multifaceted university that reached out to the black and Hispanic women of Washington. McGuire split the college into three schools: the historic women's college became the College of Arts and Sciences; the higher-revenue teacher college became the School of Education; and the continuing education classes were folded into a School of Professional Studies. Trinity began recruiting at D.C. high schools. She expanded the professional schools, whose combined enrollment rose from 639 in 1989 to 974 in 1999. By the school's 1997 centennial, it had become the private college of choice for the women of D.C. public schools.[2]

Trinity has an annual enrollment of about 2,000 students in the University's four schools, which offer undergraduate and graduate degrees in a variety of academic areas.

As of early 2010, school enrollment was 67 percent African American, 21 percent Hispanic, 6 percent white and 6 percent international. Men made up 8 percent of total enrollment in all programs.[2]

Trinity's annual tuition as of 2009 was $19,360, with the average student contributing $1,000 to $2,000 and the remainder coming from federal and local grants and from tuition discounts. The school serves an economically poorer student population than any of the historically black institutions around Washington D.C., its socioeconomic peers, with two-thirds of its students receiving Pell grants, though Trinity has a higher graduation rate than several of those peers. As of 2010, between 40 and 50 percent of bachelor's degree candidates graduated within six years.[2]

Playing as the Trinity Tigers, Trinity competes in the NCAA Division III, primarily in the Great South Athletic Conference (GSAC), in basketball, lacrosse, soccer, tennis, and volleyball. Newly added for the spring season of 2012 is softball. The Director of Athletics is Tracy Renken.

The newest building on the Trinity Campus, the Trinity Center for Women and Girls in Sports, was completed in 2003. It features a basketball arena; walking track; swimming pool and spa; fitness center with weight machines, free weights and cardio equipment and dance studio, tennis courts, and an athletic field. Free to Trinity students, the Center offers memberships to local residents. 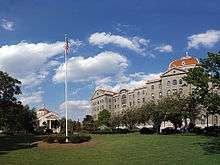 The campus includes the following buildings: