Though Salem is officially classified as a women's college, men 23 years of age and over are admitted into the Continuing Education program (through the Martha H. Fleer Center for Adult Education) and into graduate-degree programs. In 2009, Forbes rated it 67th of America's Best Colleges.[1] 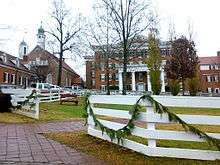 Located in the historic Moravian community of Old Salem, Salem College was originally a girls' school established by the Moravians, who believed strongly in equal education for men and women. The idea for the school began in 1766, when (at the age of 17) Sister Elisabeth Oesterlein walked from Bethlehem, Pennsylvania to Salem. On April 22, 1772, the Little Girls' School was founded. Her influence led the school to be among the first to accept non-white students. It became a boarding school in 1802 and in 1866 it changed its name to the Salem Female Academy. The school began giving college diplomas in 1890. In 1907 the name was officially changed to Salem Academy and College and to this day both Salem Academy and Salem College share the campus in adjacent Old Salem.

During the summer, the Salem campus has, since 1963, housed one campus of the Governor's School of North Carolina, a state-run summer program for gifted high school students.

Salem has eight residence halls on campus. One, Alice Wolle Clewell is designated for first-year students. The additional residence halls are named South, Bahnson House, Hattie Strong, Louisa Wilson Bitting, Mary Reynolds Babcock and Dale H. Gramley, Each hall is named after someone who was important to the Salem community. The Fogle Flats are townhouses available to seniors.

In the Spring of 2014 the Student Center was completed to showcase the beautiful campus and be a hub for Salem's student events and gatherings. The student center features a café, bookstore, theater, student lounge, meeting rooms and a student organizational workroom. Lambert Architecture + Interiors designed the project (built by Frank L. Blum Construction) to be modern and open while reflecting Salem’s historic roots. Located adjacent to Corrin Refectory and Bryant Hall, it was the first new building erected on Salem’s campus since 1982.

The McHugh Sister's flats were added in fall of 2015, serving as apartment-style housing for junior and senior status students.[2]

Salem College enrolls (as of 2007) approximately 1,100 students; this includes undergraduate students, graduate students in the field of Education as well as adult Continuing Education students who live off-campus. An estimated 450 students are "traditional" (under age 23) undergraduates who live on campus. All "traditional" undergraduates live on Salem's campus or off-campus with their immediate family. Though the majority hail from North Carolina and the surrounding states, many come from as far away as Texas, Florida, Colorado, New York and Maine. There is also an international student population, with students from Nepal, Ethiopia, South Korea, Mexico and Burma. The diversity of Salem's student population creates classes that are a rich mixture of traditional-aged college students and adult students, enhancing the learning environment.

Salem College shares its campus with Salem Academy, a residential high school for young women. They formerly shared buildings, but the Academy was given its own buildings in the early 1900s.

Students are able to participate in over 40 clubs on campus, ranging from religious to political to environmental to social.[3]

Traditional-age students are required to complete an internship and community service as part of the Salem Signature general education program.[4]

Salem College is home to the Salem College Center for Women Writers. The center sponsors workshops and lectures, and hosts a prestigious annual writing contest.[5]

Salem, known athletically as the Spirits, is a member of the NCAA Division III; and competes in the Great South Athletic Conference (GSAC). Currently, basketball, cross-country, soccer, softball, swimming, tennis, and volleyball exist on campus as NCAA varsity sports. Equestrian, field hockey and softball are club sports. Salem's basketball team won the regional championship in February 2007. In 2013 Salem ended the season with the most wins in basketball history at 17-11. The soccer team won the regional championship in 2008, and has compiled a 49-18-3 record over the last four years. In 2011 the soccer team was Meredith Classic Runners-Up. The Salem College soccer team in 2013 was one of only 88 teams in both men's and women's soccer for all NCAA divisions to earn the Team Ethics Award presented by the National Soccer Coaches Association of America. The cross country team would end the year in second place for 2013. The softball season for 2013 ended with Best Record:14-22 and Best Great South Record: 9-7. The volleyball team went to the NCAA Tournament and won the Great South Athletic Conference Tournament for the 1st time. The Spirits had 4 players on the Great South All-Conference team, 1 player on the GSAC All-Freshmen team, and 2 players on the GSAC All-Academic Team.

The most recent information reflects Salem's superior athletic teams that can be seen with their team honors and awards:

Among its alumnae is Sarah Childress Polk, wife of U.S. President James Knox Polk. The daughter of Chief John Ross, Principal Chief of the Cherokee Nation, was attending Salem College prior to her withdrawal to accompany her family on the Trail of Tears.

Recent Salem alums include actress Celia Weston and Sarah Covington Fulcher, who currently holds at least two world records: the first woman and only the third person to complete a 2700-mile run across Australia, following up with the world's longest continuous solo run by any person.[6][7][8]