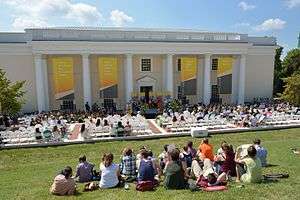 The university is the oldest institution of higher education for women in the nation affiliated with the Presbyterian Church,[8][9] and it is home to the only all-female corps of cadets in the world.[10][11] U.S. News & World Report listed MBU as the Top 50 Regional Universities in the South for the 2015 edition of “Best Colleges.”[12]

Located in Staunton, Virginia within Augusta County, the university was founded as the Augusta Female Seminary in 1842 by Rufus William Bailey. Among the first students was Mary Julia Baldwin. In 1863, Baldwin was named principal and headed the school through the Civil War, although most schools in the area had closed due to the war and economic hardship.[13] The school was renamed Mary Baldwin Seminary in 1895 in honor of Baldwin. In 1923, the name changed to Mary Baldwin College when the school became a four-year institution.[9][14] In 1963, Mary Baldwin officially ended its policy of admitting only white women.[15]

When Staunton Military Academy (SMA) closed in 1976, its grounds and buildings were purchased by Mary Baldwin, expanding the campus from 19 acres to 58.5.[16] In 1977, Mary Baldwin became the first college in Virginia to launch an adult degree program. Cynthia Haldenby Tyson was appointed as the eighth president in 1985. That same year, the Program for the Exceptionally Gifted (PEG) was established to allow academically gifted girls to earn bachelor's degrees.[6][9][14]

The Virginia Women’s Institute for Leadership was established as the only all-female cadet corps in 1995. In 2001, the university established the Shakespeare and Performance graduate program after the American Shakespeare Center opened the Blackfriars Playhouse in Staunton.[6]

After 18 years as president, Cynthia Haldenby Tyson retired and Pamela Fox, dean of Miami University's School of Fine Arts, was named the ninth president in 2003.[17][18]

In May 2015, the Board of Trustees voted unanimously to change the name of the institution to Mary Baldwin University, effective August 31, 2016, reflecting the school’s range of bachelor’s, master’s, and doctoral programs.[19]

Mary Baldwin University offers Bachelor of Arts, Bachelor of Science and Bachelor of Social Work degrees in more than 30 majors.[20] The Mary Baldwin College for Women and co-educational Online and Adult Programs are both undergraduate studies programs. The school also offers undergraduate and graduate degrees through the College of Education (Master of Arts in Teaching and Master of Education), Murphy Deming College of Health Sciences (Doctor of Occupational Therapy, Doctor of Physical Therapy, Master of Science in Physician Assistant, and RN-to-BSN), and the Shakespeare and Performance program (Master of Letters and Master of Fine Arts).[21]

The co-educational Master of Letters and Master of Fine Arts students in the Shakespeare and Performance program is partnered with the American Shakespeare Center, allowing the students to learn and perform in the Blackfriars Playhouse located a block away from campus.[22]

The Heifetz International Music Institute, founded by violinist Daniel Heifetz, was moved from its Wolfeboro, New Hampshire location to Mary Baldwin University in 2012. The institute accepts applicants annually from around the world and offers summer programs for classically trained musicians.[23][24]

Mary Baldwin has partnerships with several women’s colleges around the world including Doshisha Women's College of Liberal Arts in Japan, Sungshin Women's University in South Korea, and Lady Doak College in India.

There are various leadership opportunities available to students, including the Student Government Association (SGA), which consists of over 120 elected or appointed positions. The SGA is responsible for upholding the principles of the Honor Code as well as managing the MBU student community.

Founded in 1995 by request of the Commonwealth of Virginia, VWIL (pronounced "vee-will") is an all-female cadet corps and four-year program preparing participants for both military and civilian leadership through academics, fitness, military training, practical experiences and co-circular activities. Cadets also participate in co-educational ROTC training.[27]

Program for the Exceptionally Gifted

The Program for the Exceptionally Gifted (PEG) at MBU is an acceleration program for girls ages 13 to 15 who have not completed high school. The program was founded in 1985 with a class of 11 students and now enrolls approximately 30 new students each year. Participants ("PEGs") attend classes with traditional-age students with the exception of an introduction to college course, and depending on age level, an introductory English course (called PEGlish) as well. PEGs typically earn a bachelor's degree in the normal four years.[28][29]

Early College Academy, or ECA is an acceleration program for girls ages 16–17 who have not completed high school. ECA students live on campus with the rest of the student body, typically in a freshman dorm. The ECA program has not been active for very long, it is fully supported by staff of the PEG program (explained above).

The MBU main campus is located in Staunton, and its Murphy Deming College of Health Sciences is located on a branch campus in nearby Fishersville, Virginia. The college operates regional centers throughout Virginia in Charlottesville, Emporia, Glenns, Kilmarnock, Richmond, Roanoke, South Boston, South Hill, Warsaw, Weyers Cave, and Williamsburg.

The first building on Staunton campus was the Mary Baldwin University, Main Building, built in 1844. The building now houses administrative offices and has been listed on the National Register of Historic Places (NRHP) since 1973.[30]

MBU celebrates several annual traditions with the surrounding community. Every autumn, Mary Baldwin University commemorates Apple Day, during which students and faculty glean apples at a Virginia orchard. In recent years, the collected fruit has been distributed to area food pantries.[31] The college also has marked Founders Day each October since 1898 to honor founders Mary Julia Baldwin and Rufus William Bailey.[32]

The “Mary Baldwin College Fight Song” is sung to the tune of “Blue and Gold.” The song was used by Staunton Military Academy (SMA) until it closed in 1976. After Mary Baldwin purchased the SMA campus, the college began using the academy’s athletic fields, adopted the melody of the SMA fight song in 2008, and still flies SMA flags during parades.[16]