Tullus Hostilius (r. 673–642 BC) was the legendary third king of Rome. He succeeded Numa Pompilius and was succeeded by Ancus Marcius. Unlike his predecessor, Tullus was known as a warlike king.[1]

Tullus Hostilius was the grandson of Hostus Hostilius, who had fought with Romulus and died during the Sabine invasion of Rome.[2]

The principal feature of Tullus' reign was his defeat of Alba Longa. After Alba Longa was beaten (by the victory of three Roman champions over three Albans), Alba Longa became Rome's vassal state. However, after the Alban dictator Mettius Fufetius subsequently betrayed Rome, Tullus ordered Alba Longa to be destroyed and forced the migration of the Alban citizenry to Rome, where they were integrated and became Roman citizens.[3]

Tullus also fought successful wars against Fidenae and Veii and against the Sabines.[4]

According to Livy, Tullus paid little heed to religious observances during his reign, thinking them unworthy of a king's attention. However, at the close of his reign, Rome was affected by a series of prophecies including a shower of stones on the Alban Mount (in response to which a public religious festival of nine days was held – a novendialis), a loud voice was heard on the summit of the mount complaining that the Albans had failed to show devotion to their former gods, and a pestilence struck in Rome. King Tullus became ill and was filled with superstition. He reviewed the commentaries of Numa Pompilius and attempted to carry out sacrifices recommended by Numa to Jupiter Elicius. However, Tullus did not undertake the ceremony correctly, and both he and his house were struck by lightning and reduced to ashes as a result of the anger of Jupiter.[5] 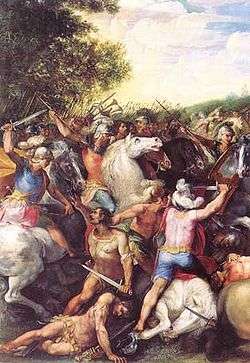 As with those of all the early kings of Rome, the events ascribed to the reign of Tullus Hostilius are treated with skepticism by modern historians. Part of this is due to obvious flaws in the literary tradition describing the kings: much like the confusion the Ancients exhibited in attributing identical accomplishments to both Tarquinius Priscus and Tarquinius Superbus, the accomplishments of Tullus Hostilius are thought by many scholars to be rhetorical doublets of those of Romulus. Both are brought up among shepherds, carry on war against Fidenae and Veii, double the number of citizens, and organize the army. Additionally, Tullus Hostilius' warlike and ferocious character seems to be little more than a contrasting stereotype to that of the peaceable, devout Numa Pompilius; the first Roman annalists may merely have imputed aggressive qualities to Hostilius by naively parsing his gentile name (Hostilius meaning "hostile" in Latin).

Hostilius was probably a historical figure, however, in the strict sense that a man bearing the name Tullus Hostilius likely reigned as king in Rome. The most compelling evidence is his name: "Tullus" is a unique praenomen in Roman culture, and his gentile name is obscure and linguistically archaic enough to rule out the possibility that he was a crude later invention. Additionally, two distinctive events traditionally ascribed to his reign may be regarded as historical fact in the sense that we know they happened during the early regal period, although their association with Hostilius is debatable. The first event is the destruction of Alba Longa. It is beyond doubt that the Alban mountains were the site of a large settlement and that this settlement fell under Roman power during the regal period. But when and by whom Alba Longa was destroyed is uncertain. It was almost certainly subjugated at a later date than that given by Livy and may have been destroyed by the Latins and not by the Romans, who might have regarded as impious the destruction of their traditional mother-country.

The second historical event is the construction of the original Senate House, the Curia Hostilia, whose remains on the northwestern edge of the Forum have been dated to around 600 BC, and which was universally held by the tradition to have been built by – and thus named in honor of – Tullus. Although a date of 600 BC would put it well outside of the dates traditionally ascribed to Tullus Hostilius' reign, this is hardly a problem; the absurdly long reigns of the Roman kings have never been taken seriously by scholars (with an average length of 34 years per king, the traditional chronology would be without historical parallel - even the remarkably stable and healthy English monarchy has an average reign of only 21 years). A more plausible chronology offered by Tim Cornell and supported by recent archaeological research contracts the regal period from 240 to around 120 years and places the historical accomplishments of the kings between 625 BC (when the first signs of real urbanisation and unification of Rome show up in the archaeological record) and 500 BC. This would bring the construction of the Curia Hostilia well within the time of a possible reign by Tullus Hostilius and also explain the otherwise inexplicable name of the building.[6]

Incidents from legends surrounding Tullus Hostilius were used as the basis of opera librettos during the baroque period in music, beginning with a Tullo Ostilio opera performed in Rome in 1694 with music of Giovanni Bononcini. Operatic pastiches with the title Tullo Ostilio performed in Prague in 1727 and Brno in 1735 included music of Antonio Vivaldi. Consistent with contemporary conventions, the stories concentrate on concocted love stories involving members of the principal character's family.

Tullus Hostilius was played by Robert Keith in the 1961 film Duel of Champions, which centered around the Horatii.

Tullus is briefly mentioned in the Aeneid in the description of Aeneas' shield. He is described as hauling away the remains of the liar Mettius through the brush.

He is a character in Philip Jose Farmer's novel Riverworld. After the Resurrection, he has teamed up with Hermann Göring to run a slave-state.