Not to be confused with Lucius Appuleius Saturninus, a Roman demagogue or with Pseudo-Apuleius, an author.

Apuleius (/ˌæpjᵿˈliːəs/; also called Lucius Apuleius Madaurensis and in Berber: Afulay c. 124 – c. 170 AD)[1] was a Latin-language prose writer. He was a Numidian who lived under the Roman Empire[2] and was from Madauros (now M'Daourouch, Algeria). He studied Platonism in Athens, travelled to Italy, Asia Minor, and Egypt and was an initiate in several cults or mysteries. The most famous incident in his life was when he was accused of using magic to gain the attentions (and fortune) of a wealthy widow. He declaimed and then distributed a witty tour de force in his own defense before the proconsul and a court of magistrates convened in Sabratha, near ancient Tripoli, Libya. This is known as the Apologia.

His most famous work is his bawdy picaresque novel, the Metamorphoses, otherwise known as The Golden Ass. It is the only Latin novel that has survived in its entirety. It relates the ludicrous adventures of one Lucius, who experiments with magic and is accidentally turned into a donkey. 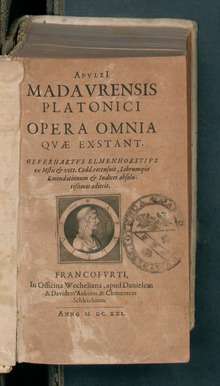 Apuleius was born in Madauros, a colonia in Numidia on the North African coast bordering Gaetulia, and he described himself as "half-Numidian half-Gaetulian."[3] Madaurus was the same colonia where Augustine of Hippo later received part of his early education, and, though located well away from the Romanized coast, is today the site of some pristine Roman ruins. As to his first name, no praenomen is given in any ancient source;[4] late-medieval manuscripts began the tradition of calling him Lucius from the name of the hero of his novel.[5] Details regarding his life come mostly from his defense speech (Apology) and his work Florida, which consists of snippets taken from some of his best speeches.

His father was a provincial magistrate (duumvir)[3] who bequeathed at his death the sum of nearly two million sesterces to his two sons.[6] Apuleius studied with a master at Carthage (where he later settled) and later at Athens, where he studied Platonist philosophy among other subjects. He subsequently went to Rome[7] to study Latin rhetoric and, most likely, to speak in the law courts for a time before returning to his native North Africa. He also travelled extensively in Asia Minor and Egypt, studying philosophy and religion, burning up his inheritance while doing so.

Apuleius was an initiate in several Greco-Roman mysteries, including the Dionysian Mysteries.[8] He was a priest of Asclepius[9] and, according to Augustine,[10] sacerdos provinciae Africae (i.e., priest of the province of Carthage).

Not long after his return home he set out upon a new journey to Alexandria.[11] On his way there he was taken ill at the town of Oea (modern-day Tripoli) and was hospitably received into the house of Sicinius Pontianus, with whom he had been friends when he had studied in Athens.[11] The mother of Pontianus, Pudentilla, was a very rich widow. With her son's consent – indeed encouragement – Apuleius agreed to marry her.[12] Meanwhile, Pontianus himself married the daughter of one Herennius Rufinus; he, indignant that Pudentilla's wealth should pass out of the family, instigated his son-in-law, together with a younger brother, Sicinius Pudens, a mere boy, and their paternal uncle, Sicinius Aemilianus, to join him in impeaching Apuleius upon the charge that he had gained the affections of Pudentilla by charms and magic spells.[13] The case was heard at Sabratha, near Tripoli, c. 158 AD, before Claudius Maximus, proconsul of Africa.[14] The accusation itself seems to have been ridiculous, and the spirited and triumphant defence spoken by Apuleius is still extant. This is known as the Apologia (A Discourse on Magic).

Apuleius accused an extravagant personal enemy of turning his house into a brothel and prostituting his own wife.[15]

Of his subsequent career we know little. Judging from the many works of which he was author, he must have devoted himself diligently to literature. He occasionally gave speeches in public to great reception; he had the charge of exhibiting gladiatorial shows and wild beast events in the province, and statues were erected in his honor by the senate of Carthage and of other senates.[16] 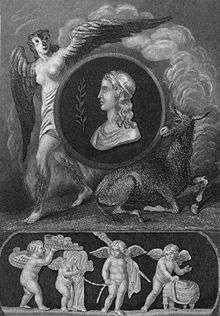 Frontispiece from the Bohn Library 1902 edition of The Works of Apuleius: a portrait of Apuleius flanked by Pamphile changing into an owl and the Golden Ass

The Golden Ass (Asinus Aureus) or Metamorphoses is the only Latin novel that has survived in its entirety. It is an imaginative, irreverent, and amusing work that relates the ludicrous adventures of one Lucius, who experiments with magic and is accidentally turned into an ass. In this guise he hears and sees many unusual things, until escaping from his predicament in a rather unexpected way. Within this frame story are found many digressions, the longest among them being the well-known tale of Cupid and Psyche.

The Metamorphoses ends with the (once again human) hero, Lucius, eager to be initiated into the mystery cult of Isis; he abstains from forbidden foods, bathes, and purifies himself. He is introduced to the Navigium Isidis. Then the secrets of the cult's books are explained to him, and further secrets are revealed before he goes through the process of initiation, which involves a trial by the elements in a journey to the underworld. Lucius is then asked to seek initiation into the cult of Osiris in Rome, and eventually is initiated into the pastophoroi – a group of priests that serves Isis and Osiris.[17] The adventures of the ass stand at the beginning of the picaresque novel tradition which eventually produced The History of Tom Jones, a Foundling.[18]

His other works are:

Apuleius wrote many other works which have not survived. He wrote works of poetry and fiction, as well as technical treatises on politics, dendrology, agriculture, medicine, natural history, astronomy, music, and arithmetic, and he translated Plato's Phaedo.[20]

The extant works wrongly attributed to Apuleius are:[21]

The Apuleian Sphere described in Petosiris to Nechepso, also known as "Columcille's Circle" or "Petosiris' Circle",[22] is a magical prognosticating device for predicting the survival of a patient.[23]