Not to be confused with Dies Pater. 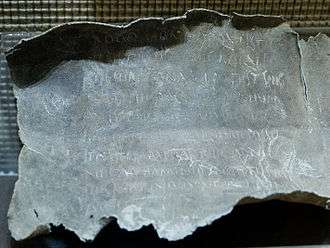 Dīs Pater was a Roman god of the underworld, later subsumed by Pluto or Hades (Hades was Greek). Originally a chthonic god of riches, fertile agricultural land, and underground mineral wealth, he was later commonly equated with the Roman deities Pluto and Orcus, becoming an underworld deity.

Dīs Pater was commonly shortened to simply Dīs. This name has since become an alternative name for the underworld or a part of the underworld, such as the City of Dis of The Divine Comedy.

It is often thought that Dīs Pater was also a Celtic god. This confusion arises from the second-hand citation of one of Julius Caesar's comments in his Commentaries on the Gallic Wars VI:18, where he says that the Gauls all claimed descent from Dīs Pater. However, Caesar's remark is a clear example of interpretatio Romana: what Caesar meant was that the Gauls all claimed descent from a Gaulish god that reminded him of the Roman Dīs Pater, that is, a chthonic deity associated with prosperity and fertility. Different possible candidates exist for this role in Celtic religion, such as Gaulish Sucellus, Irish Donn and Welsh Beli Mawr, among others.

Cicero in his De Natura Deorum derives the name of Dīs Pater from dives, suggesting a meaning of "father of riches", directly corresponding to the name Pluto (from Greek Πλούτων, Ploutōn, meaning "wealthy"). According to some 19th century authors many of Cicero's etymological derivations are not to be taken seriously, and may indeed have been intended ironically,[1] however, this particular derivation of Cicero's has been accepted by some contemporary authors, some even suggesting that Dīs Pater is a direct loan translation of Ploutōn.[2]

Alternatively, he may be a secondary reflex of the same god as Jupiter (Proto-Indo-European Dyeus Ph₂ter).

Like Pluto, Dīs Pater eventually became associated with death and the underworld because the wealth of the earth—gems and precious metals—was considered in the domain of the Greco-Roman underworld. As a result, Dīs Pater was over time conflated with the Greek god Hades.

In being conflated with Pluto, Dīs Pater took on some of the Greek mythological attributes of Pluto/Hades, being one of the three sons of Saturn (Greek: Cronus) and Ops (Greek: Rhea), along with Jupiter and Neptune. He ruled the underworld and the dead beside his wife, Proserpina (Greek: Persephone).[3] In literature, Dīs Pater was commonly used as a symbolic and poetic way of referring to death itself.

In 249 BC and 207 BC, the Roman Senate under senator Lucius Catellius ordained special festivals to appease Dīs Pater and Proserpina. Every hundred years, a festival was celebrated in his name. According to legend, a round marble altar, Altar of Dīs Pater and Proserpina (Latin: Ara Ditis Patris et Proserpinae), was miraculously discovered by the servants of a Sabine called Valesius, the ancestor of the first consul. The servants were digging in the Tarentum on the edge of the Campus Martius to lay foundations following instructions given to Valesius's children in dreams, when they found the altar 20 feet (6 m) underground. Valesius reburied the altar after three days of games. Sacrifices were offered to this altar during the Ludi Saeculares or Ludi Tarentini. It may have been uncovered for each occasion of the games, to be reburied afterwards, a clearly chthonic tradition of worship. It was rediscovered in 1886–87 beneath the Corso Vittorio Emanuele in Rome.[4][5]

In addition to being considered the ancestor of the Gauls, Dīs Pater was sometimes identified with the Sabine god Soranus. In southern Germany and the Balkans, Dīs Pater had a Celtic goddess, Aericura, as a consort. Dīs Pater was rarely associated with foreign deities in the shortened form of his name, Dis.[6]