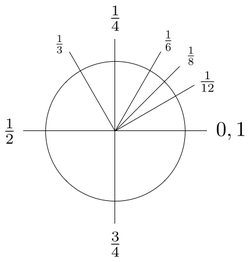 A turn is a unit of plane angle measurement equal to 2π radians, 360° or 400 gon. A turn is also referred to as a revolution or complete rotation or full circle or cycle or rev or rot.

A turn can be subdivided in many different ways: into half turns, quarter turns, centiturns, milliturns, binary angles, points etc.

A turn can be divided in 100 centiturns or 1000 milliturns, with each milliturn corresponding to an angle of 0.36°, which can also be written as 21′ 36″. A protractor divided in centiturns is normally called a percentage protractor.

Binary fractions of a turn are also used. Sailors have traditionally divided a turn into 32 compass points. The binary degree, also known as the binary radian (or brad), is  1⁄256 turn.[1] The binary degree is used in computing so that an angle can be represented to the maximum possible precision in a single byte. Other measures of angle used in computing may be based on dividing one whole turn into 2n equal parts for other values of n.[2]

The word turn originates via Latin and French from the Greek word τόρνος (tornos – a lathe).

In 1697, David Gregory used π/ρ (pi over rho) to denote the perimeter of a circle (i.e., the circumference) divided by its radius.[4][5] However, earlier in 1647, William Oughtred had used δ/π (delta over pi) for the ratio of the diameter to perimeter. The first use of the symbol π on its own with its present meaning (of perimeter divided by diameter) was in 1706 by the Welsh mathematician William Jones.[6] Euler adopted the symbol with that meaning in 1737, leading to its widespread use.

Percentage protractors have existed since 1922,[7] but the terms centiturns and milliturns were introduced much later by Sir Fred Hoyle.[8]

The circumference of the unit circle (whose radius is one) is 2π.

In 2010, Michael Hartl proposed to use the Greek letter tau (τ) instead of pi (π) for two reasons. First, τ is the number of radians in one turn, which allows fractions of a turn to be expressed more directly: for instance, a 3/4 turn would be represented as 3/4τ rad instead of 3/2π rad. Second, τ visually resembles π, whose association with the circle constant is unavoidable.[15] Hartl's Tau Manifesto gives many examples of formulas that are simpler if tau is used instead of pi.[16][17][18]

In kinematics, a turn is a rotation less than a full revolution. A turn may be represented in a mathematical model that uses expressions of complex numbers or quaternions. In the complex plane every non-zero number has a polar coordinate expression z = r cis(a) = r cos(a) + ri sin(a) where r > 0 and a is in [0, 2π). A turn of the complex plane arises from multiplying z = x + iy by an element u = ebi that lies on the unit circle:

Frank Morley consistently referred to elements of the unit circle as turns in the book Inversive Geometry, (1933) which he coauthored with his son Frank Vigor Morley.[19]

The Latin term for turn is versor, which is a quaternion that can be visualized as an arc of a great circle. The product of two versors can be compared to a spherical triangle where two sides add to the third. For the kinematics of rotation in three dimensions, see quaternions and spatial rotation.