Umm Salal Sport Club (Arabic: نادي أم صلال الرياضي‎‎) is a Qatari professional association football team playing at the first level Qatar Stars League. It is based in Umm Salal. It used to be known as Al-Tadamun Sport Club. It is best known for being the first Qatari club to make it to the semi-finals of the AFC Champions League.

Umm Salal were formed in 1979 under the name Al-Tadamun Club and entered into the Qatari Second Division along with five other clubs.[1] After the dissolution of two other clubs in the second division, Al Tadamun was also dissolved. The club was reformed in 1996, with Sheikh Abdulaziz bin Abdulrahman Al Thani heading the club.[2] It won the Qatari 2nd Division in their second season after reformation, in addition to lifting the league trophy two more times in 2000 and 2006.

In 2004, the club's name, Al Tadamun Club, was changed to "Umm Salal" by decision of the Qatar Olympic Committee.

They won promotion to the Qatar Stars League in the 2006–07 season. They enjoyed league success, finishing third in consecutive seasons. In 2008, they qualified for the AFC Champions League 2009 after defeating Al Gharafa 4–1 on penalties in the Emir Cup final. They were knocked out of the ACL in the semi-finals, which was the furthest any Qatari club had ever advanced at that time.

The team's nickname, Barzan's Falcons, is a reference to the Barzan Tower, which the Umm Salal Mohammed Fort houses. The tower became renowned for being used during Ramadan to ensure the holy month was observed at the correct time.[3] 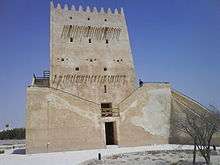 Barzan Tower as viewed from the side

As of Qatar Stars League:

Only league games are counted. To appear in this list, a player must have either:

Last updated: 1 May 2014
Source: Board of directors 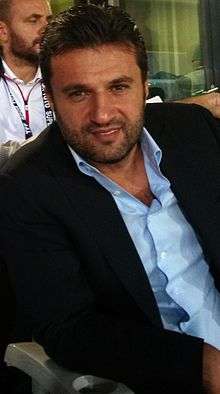 Bülent Uygun, the current head coach of the club