For other uses, see Steelers (disambiguation).

Pohang Steelers is a South Korean professional football club based in Pohang, North Gyeongsang. They were originally called Pohang Steelworks, after the Pohang Iron and Steel Company that owned it. The club was founded in 1973 and is one of Korean football's most successful sides.

They are the most successful team in Asia with three AFC Champions League titles.[1]

The club achieved a Korean football 'first' at the end of 1990 with the opening of their purpose-built 20,000 seater Steelyard Stadium.

1995 saw yet another name change, when the club became the Pohang Atoms. This name change was an attempt to further strengthen local ties with the region, and in 1997 they adopted their current name, the Pohang Steelers. The side scaled Asian football heights, winning the Asian Champions Cup in 1997 and 1998 to establish themselves as one of Asia's top teams.

Unfortunately, the club suffered something of a fall from grace in the 2000s, struggling near the foot of the table, but bounced back to the forefront of Korean football by winning the first stage of the 2004 K-League Championship. The club qualified for the final Championship match of the 2004 season, but lost 4–3 on penalties to Suwon Samsung Bluewings.

In 2007, the club won the Championship play-off by beating Seongnam Ilhwa Chunma, who finished in 1st place in the regular season of the K-League. Pohang won the first leg play-off game at home 3–1, and then traveled to Seongnam for the second leg game, recording a 1–0 victory to seal a 4–1 aggregate triumph. The Steelers had ended the K-League season in 5th place, but then defeated Daejeon Citizen, Gyeongnam, Suwon Samsung Bluewings and finally Seongnam Ilhwa Chunma in the play-offs to win the championship.

Pohang again made the play-offs in the 2008 season by finishing the season 5th in the league, but were knocked out in their play-off game by Ulsan Hyundai in a penalty shoot-out. However, the club fared much better in the Korean FA Cup. After defeating Seongnam Ilhwa Chunma in the quarter-final with a penalty shoot-out following a 1–1 draw after regular and extra time, Pohang knocked out Daegu FC in the semi-final, and then Gyeongnam FC in the final to ensure qualification for the 2009 AFC Champions League by virtue of winning the 2008 Korean FA Cup.

The Steelers then enjoyed a dream run in the Champions League, which saw the club defeat Umm-Salal of Qatar 2–1 (4–1 agg.) to advance to their first ever AFC Champions League final.[2] The Steelers defeated Saudi club Al-Ittihad 2–1 at the National Stadium in Tokyo, Japan to claim the title.[3]

For the 2009 K-League season, Pohang once again qualified for the play-off phase of the league by finishing the regular season in 2nd place, equal with FC Seoul on points, but ahead on goal difference. The Steelers had a bye to the semi-finals, but lost to Seongnam Ilhwa Chunma.[4] Nonetheless, their regular season placing saw them qualify for the 2010 AFC Champions League Group Stage.

Following the conclusion of the 2009 K-League season, at the 2009 FIFA Club World Cup in December, the Steelers finished in third place after defeating Atlante 4–3 on penalties.[5]

In 1994, Pohang Steelworks Atoms wore a green kit and a white kit with a multicolored sun in the center, in 1997 Pohang Steelers wore a white shirt with black shoulders stripes and black shorts, while in 2000 the first kit consisted of a sky blue shirt and white shorts, while the away kit was a black and red hooped shirt and black shorts (similar to the current kit). In 2002 the kit was red with a black V in the chest. 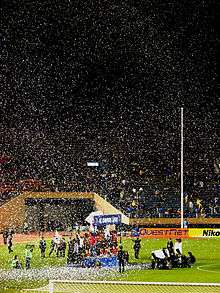 As of end of season. Only K-League matches are counted.