Ozzfest is an annual festival tour of the United States and sometimes Europe (and for the first time Japan in 2013) featuring performances by many heavy metal and hard rock musical groups. It was founded by Ozzy Osbourne[1] and his wife Sharon Osbourne,[2] both of whom also organise each yearly tour with their son Jack Osbourne.[3] The Ozzfest tour has featured bands of a variety of genres within heavy metal and hard rock, including alternative metal, thrash metal, industrial metal, metalcore, hardcore punk, deathcore, nu metal, death metal, post-hardcore, gothic metal and black metal. Ozzy Osbourne and Black Sabbath have played the tour several times over the years.[1] 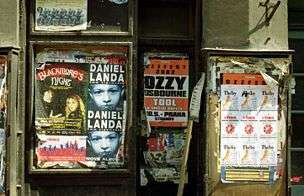 The festival was created in 1996 by Ozzy Osbourne's wife and manager, Sharon Osbourne, after she was rebuffed by Lollapalooza when she tried to get Ozzy on that festival circuit.[4] The tour was well-received, which prompted the festival to become a yearly occurrence.[1]

The first Ozzfest was not a national tour, but rather a two-day festival held in Phoenix, Arizona and Devore, California on 25 and 26 October 1996 respectively.

In 1997, there were large protests outside of the festival to cancel Marilyn Manson's performance. However, no dates were cancelled. There were also protests of a similar nature in 2001, following the Columbine High School massacre, which some groups had blamed on Marilyn Manson.

In 1998, Ozzfest ventured outside the United States for the first time into the United Kingdom, which featured a different line-up of bands. The festival would eventually return to the UK in 2001[5] and 2002.[6]

In the early 2000s, artists and bands including Slipknot, Pantera, Marilyn Manson, Mudvayne, Godsmack, Rob Zombie, Incubus, Linkin Park,[8] System of a Down, Chevelle, P.O.D., and Disturbed played the yearly music festival.[8][9] Two compilation albums of the Ozzfest tour were released, one covering select 2001[8] performances and another for 2002.[10]

On-stage footage of the Ozzfest 2004 tour was shown on MTV, as Ozzy and Sharon hosted a show on the network titled Battle for Ozzfest where they chose eight out of hundreds of bands to compete for a spot on the following year's Ozzfest. Ozzy selected one member from each chosen band to "tag along" on the tour. Each contestant had to complete numerous challenges to improve his/her band's chances of winning the contest. Occasionally, meetings would be held and certain contestants would be eliminated for various reasons. The person who prevailed as the winner and guaranteed his band's spot on the Ozzfest tour was Marc Serrano from metalcore act A Dozen Furies.[11]

At Iron Maiden's last Ozzfest performance, on 20 August 2005 at the Hyundai Pavilion at Glen Helen in San Bernardino, California, several negative events took place. During the first song, several members of the crowd, brought on by Sharon Osbourne, bombarded the British metal band Iron Maiden with eggs, bottle caps and ice after vocalist Bruce Dickinson allegedly ridiculed Ozzy's need for a teleprompter during his performances, as well as the Osbourne family's ventures into reality television (The Osbournes, Battle for Ozzfest).[12] During three of Iron Maiden's songs, the P.A. system was switched off, cutting power to vocalist Bruce Dickinson's microphone and then to all the band's instruments. During the concert, Bruce Dickinson can be heard accusing the festival's organizers of deliberately cutting off the band's power. On Iron Maiden's departure, Sharon Osbourne came on stage to make a few statements, telling the audience that she "absolutely loved Iron Maiden" but thought that the lead singer Bruce Dickinson is a "prick."[13] Rod Smallwood, manager for Iron Maiden, issued a statement shortly after the debacle condemning the attack on the band.[14] On a later Howard Stern Show,[15] In 2006, Bruce Dickinson commented, "Did I have a go at Ozzy and Black Sabbath? No. Why would I? But I do find The Osbournes TV series loathsome, and the whole cult of reality TV celebrities disgusting."[16] In response to claims that he had apologised to Ozzy for Dickinson's behaviour, Steve Harris stated "No I didn't [apologise]. What I actually said was that, if there was anything to apologise for, then I'd do it. But that was twisted around to seem like I'd said sorry – that never happened!"[16]

On 7 February 2007, it was announced that tickets to Ozzfest 2007 would be offered free of charge, dubbing the 2007 Ozzfest as "free fest."[17] Tickets were made available through sponsor websites, the Ozzfest web site and to those buying an advance copy of Ozzy Osbourne's new release, Black Rain.

Sponsorship money provided the revenue for the tour, but organizers did not pay any of the bands appearing. Ozzy Osbourne returned to the headlining slot on the tour after being absent from the 2006 tour. Ozzfest 2007 featured well-established acts such as Lamb of God, Static X, and Hatebreed.

There were problems with distribution of the free tickets. Fans were given codes to receive tickets through the official Ozzfest website, but due to the heavy load on Live Nation's secure servers, there were issues with ticket redemption. Another problem was that many "eBay scalpers" charged fans to pay for the free tickets, often turning out to be unusable duplicates of other tickets.[18] Then, on 26 July, Ozzfest gave away free tickets without requiring its "redemption code" previously required.[19]

At the show of 16 August 2007 in Holmdel, New Jersey at the PNC Bank Arts Center, controversy was generated as 83 attendees were arrested at the show, most of them underage and arrested prior to 8:00. In addition, two men died, one after overdosing on alcohol and energy drinks.[20]

Questions over whether the event would be held in 2008 began when in April that year Ozzy Osbourne announced that he would be headlining the Canadian Monsters of Rock festival.[21] The 2008 version of the festival took place for only one date at Pizza Hut Park in Frisco, Texas on 9 August 2008. The line-up featured Metallica and Ozzy Osbourne as the headliner bands, as well as other acts such as Jonathan Davis (frontman of Korn), Sevendust, DevilDriver, Serj Tankian (frontman of System of a Down), Cavalera Conspiracy, Shadows Fall, Apocalyptica and In This Moment.[22][23] Along with the two main stages was a third, named the Texas Stage, which, according to Sharon Osbourne, featured such Texas-based bands as The Sword, Drowning Pool, Goatwhore, Soilent Green and Rigor Mortis.[24][25]

The Canadian Version of "The Monsters of Rock" was held exclusively on 26 July 2008 at the McMahon Stadium located in Calgary, Alberta, Canada. It was also scheduled as a "one time only" event. The main attraction for the festival of heavy metal and mayhem were metal giants Judas Priest and the headliner, Ozzy Osbourne. In addition, various other "big league" heavy metal outfits attended the festivities. The following bands preceded the two main attractions: Serj Tankian, Hatebreed, Cavalera Conspiracy (featuring current frontman of Soulfly,and former frontman of Sepultura, Max Cavalera), Shadows Fall, Canadian metal unit Voivod, Testament, 3 Inches of Blood, Priestess, Zimmers Hole, and Dillinger Escape Plan.

On 19 October 2012, it was announced that Ozzfest will be revived on 11–12 May 2013 at Makuhari Messe in Chiba, Japan; this was the first time the festival took place in that country.[27][28] Acts confirmed for the Ozzfest Japan include Slipknot, Slash featuring Myles Kennedy and The Conspirators, Deftones, Black Sabbath, Tool and Stone Sour.[29][30]

Tokyo, Japan. This will be the second time the festival has taken place in the country. Acts confirmed for Ozzfest Japan include Ozzy and Friends, Korn, Evanescence, Jane's Addiction, Bullet for My Valentine, A Day to Remember, Hatebreed, Black Label Society, Corey Taylor, Crossfaith, and Babymetal.

Most appearances at Ozzfest