A Sector is a shore-based operational unit of the United States Coast Guard. Each Sector is responsible for the execution of all Coast Guard missions within its Area of Responsibility (AOR), with operational support from Coast Guard Cutters and Air Stations. Subordinate commands within a Sector typically include Stations and Aids-to-Navigation (ATON) Teams. Some Sector commands also have subordinate units such as Sector Field Offices and Marine Safety Units that are responsible for mission execution in parts of the Sector's AOR. There are 36 sectors within the Coast Guard.

Sectors replaced Coast Guard Groups, Marine Safety Offices (MSO), Activities, and Vessel Traffic Services (VTS). Previously, a Group and its units provided Search and Rescue (SAR), maritime law enforcement, recreational boating safety, and maintained aids to navigation. MSOs enforced federal laws and regulations related to the safety and security of vessels, port facilities, and the marine environment, and assisted other law enforcement agencies. The new Sector organizations are based on the Activities prototype commands established in 1996 in New York and Baltimore, and (later) San Diego. The Activities units were praised for their efficiency and unity of effort in the aftermath of the 9/11 attacks.

Before 2004, field operations in a single port fell under multiple, mission-based commands (Group, MSO, and VTS) that were physically dispersed, had unique chains of command and different program managers at Coast Guard Headquarters, lacked a consistent voice to the public, and had some mission overlap. The attacks of September 11 called for a new Coast Guard unity of effort that was cumbersome to achieve using the previous multiple command port-level structure. The Coast Guard’s move from the Department of Transportation to the Department of Homeland Security and implementation of the Maritime Transportation Security Act of 2002 (MTSA) provided further impetus to restructure.

In 2003, the Coast Guard began to consolidate field activities for its Commercial Vessel Safety, Port and Environmental Safety, Marine Environmental Response, Port Security, Waterways Management, Bridge Administration, Search and Rescue (SAR), Recreational Boating Safety missions under one local Sector Command. The organizational change to Sectors eliminated the historical segregation of prevention and response activities at the local level and created a comprehensive unit that brings together field activities, authorities, and resources to provide the most effective organization and the best value to the public.

The Sector Command combines responsibilities and authorities previously shared by two or more commands into a single operational unit with a command and senior staff of highly competent experts.[1]

The Coast Guard Sector provides for rapid, coordinated response to emergencies, whether natural (such as Hurricane Katrina) or man-made, along with integrated daily operations to enforce regulations governing marine safety, security, and environmental protection. In addition, it provides an immediate safety and security assessment at the onset of any maritime event, disaster, or casualty affords critical synergy to operations essential to marine safety, security, and environmental protection.[2]

Coast Guard Sectors serve as one-stop-shops for marine safety, security, and environmental protection for major seaports and regions. They bring multi-mission capabilities to life on the front lines of the maritime environment, where Sector Commanders are afforded broad authority.[3] 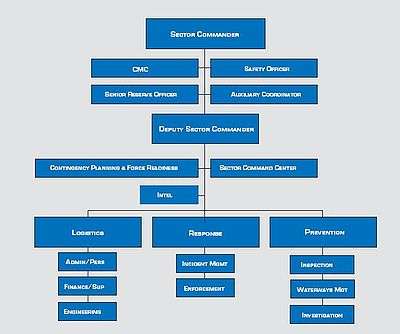 Diagram of the generic Sector organization

The Sector Command Center (SCC) is the center of Sector Operations. It provides 24-hour command, control, coordination, communications, intelligence, sensor analysis, and data mining (C4ISM). The SCC coordinates with other federal, state, and local operations centers, and issues Notices to Mariners, Situation Reports, and maritime security alerts. The SCC displays the current Common Operating Picture (COP) and Common Intelligence Picture (CIP), including a presentation of all vessels, aircraft, communications equipment, and personnel belonging to the Coast Guard and supporting agencies.

The Contingency Planning and Force Readiness Staff develops and maintains plans covering readiness, logistics, and emergency preparedness. It coordinates with the three departments in plan development and execution, and plans and executes readiness exercises to test contingency plans. The Contingency branch also monitors the training and readiness of Sector Reserve Forces and manages their mobilization and demobilization. The Contingency Planning and Force Readiness staff also manages the federally mandated Area and Area Maritime Security Committees around the nation. 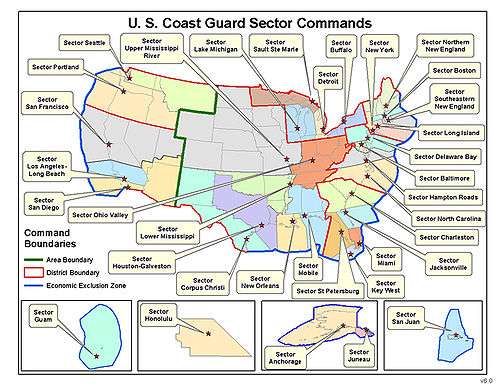 Map of Sectors across the United States