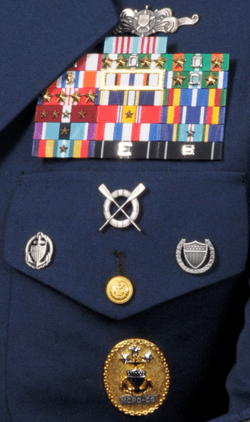 U.S. Coast Guard ribbons and badges as shown on the uniform of a former Master Chief Petty Officer of the Coast Guard

In addition to the U.S. Coast Guard badges listed below, uniform regulations also authorize the wear of some specific U.S. Navy insignia as well as some Department of Defense and Executive Branch Identification badges.[1][2]