Its name (Corpus Christi) in Latin means Body of Christ. The name was given to the settlement and surrounding bay by Spanish explorer Alonso Álvarez de Pineda in 1519, as he discovered the lush semitropical bay on the Catholic feast day of Corpus Christi. The city has been nicknamed "Texas Riviera" and "Sparkling City by the Sea", particularly featured in tourist literature. 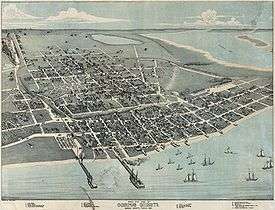 Corpus Christi was founded in 1839 by Colonel Henry Lawrence Kinney as Kinney's Trading Post, or Kinney's Ranch. It was a small trading post that sold supplies to a Mexican revolutionary army camped about 25 mi (40 km) west.[6] In July 1845, U.S. troops commanded by General Zachary Taylor set up camp there in preparation for war with Mexico, where they remained until March 1846. About a year later, the settlement was named Corpus Christi and was incorporated on 9 September 1852.[7]

The Battle of Corpus Christi was fought between August 12 and August 18, 1862, during the American Civil War. United States Navy forces blockading Texas fought a small land and sea engagement with Confederate forces in and around Corpus Christi Bay and bombarded the city. Union forces defeated Confederate States Navy ships operating in the area, but were repulsed when they landed on the coast.

Corpus Christi is situated on fluvial deposits that are of Holocene - Pleistocene age. Although no solidified rock occurs naturally,[11] the Deweyville Formation of sand, silt, clay, and gravel, is locally indurated with calcium carbonate (caliche) deposits.

According to the United States Census Bureau, Corpus Christi has a total area of 460.2 square miles (1,192.0 km2), of which 154.6 mi2 (400.5 km2, 33.60%) is land and 305.6 mi2 (791.5 km2, 66.40%) is covered by water. Drinking water for the city is supplied by three reservoirs, Lake Corpus Christi, the Choke Canyon Reservoir, and Lake Texana. Through an effective regional partnership with the Nueces River Authority and the Port of Corpus Christi Authority, a 101 mi (163 km) pipeline was built which transports water from Lake Texana to the city's O.N. Stevens Water Treatment Plant. It was named the Mary Rhodes Pipeline, after the late mayor. A phase 2 of the pipeline is underway to draw water from the Colorado River.[12] All reservoirs are outside the city limits, but Lake Corpus Christi and Choke Canyon Reservoir are managed directly by the public utility of the City of Corpus Christi. To support future water needs, plans are being completed to build a desalinization plant.[13]

Since its founding, the city has annexed nearby lands and waters for growth and development purposes. The original area encompassed several city blocks in present-day downtown Corpus Christi with the majority of city expansion occurring in the 20th century.[14] 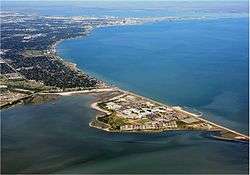 The city has a humid subtropical climate, with hot summers and very short, mild winters. In the months from November through February the weather is the coolest. There is a noticeable warming trend in which March through April is fairly warm. The warmest part of the year in Corpus Christi is June through September with August being the peak of summer. October in the city is very pleasant while still warm but not as hot as the summer months. Corpus Christi is very windy, with wind speeds often reaching to 25 miles per hour (40 km/h) with gusts reaching more than 35 miles per hour (56 km/h). The city's record high temperature is 109 °F (43 °C), on September 5, 2000. Average night-time winter lows in January, the coldest month, are a little less than 50 °F (10 °C) and its record low is 11 °F (−12 °C). In December 2004, the city experienced snowfall on Christmas Eve, the city's largest recorded snowstorm at 4.4 inches (11 cm). The snow melted the day after Christmas. Because of the uniqueness of the event, three separate books were made documenting the event, Snow, More Snow, and More Snow for Kids, all with the theme of the South Texas Christmas miracle.[15]

In 2012, Corpus Christi was ranked as the second least literate city in the U.S. in a study by Central Connecticut State University. [21]

The majority of the population is employed in the services, wholesale and retail trades, and government sectors. Corpus Christi has an unemployment rate of 7.0% as of July 2012.[22]

The Port of Corpus Christi, which is the fifth-largest U.S. port[23] and deepest inshore port on the Gulf of Mexico, handles mostly oil and agricultural products. Much of the local economy is driven by tourism and the oil and petrochemicals industry. In 2005, the port was ranked as the 47th-largest in the world by cargo tonnage.

Corpus Christi is the original home of the headquarters of Whataburger, a fast-food restaurant operator and franchiser with 650 stores in 10 states and Mexico; however, the company relocated its headquarters to San Antonio in 2009. Other large employers include CHRISTUS Spohn Health System at 5,400 local employees, the Corpus Christi Independent School District with 5,178, H-E-B at 5,000, and Bay Ltd. at 2,100.[24] Other companies based in Corpus Christi include Stripes Convenience Stores and AEP Texas.[25][26]

Corpus Christi became the first major city to offer city-wide free wi-fi in April 2005 [27] to allow remote meter reading after a meter reader was attacked by a dog. In 2007, the network was purchased by Earthlink for $5.5 million, and stopped being a free service on May 31, 2007.[28]

Various sections of Corpus Christi maintain distinct senses of identity and community from the city proper, especially the Calallen and Flour Bluff areas. Clarkwood and Annaville have a less prominent sense of identity, but the distinction remains. These areas are sometimes mistakenly believed to be separate municipalities.

The city has many demographic groups, ethnicities, and subcultures, each giving it a distinct flavor: the defense bases and the people who work there; the large Hispanic community; the oil-related professionals and workers; the cowboy culture; and the surfers.

In 2015, Men's Health magazine ranked Corpus Christi as the fattest city in the United States, renaming it "Corpulent Christi".[29] Obesity and Diabetes rank 2nd and 3rd in the nation, respectively, along with the fact that the city ranks extremely high in the lack of physical activity and the number of fast food restaurants.[29]

The city is home to a number of popular destinations for both tourists and residents. The official visitor and tourism information organization is the Corpus Christi Convention and Visitors Bureau. Some of the most visited attractions are located on North Beach, where the Texas State Aquarium and the USS Lexington Museum on the Bay are located.[30] 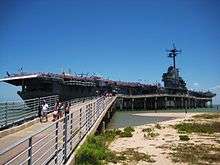 The USS Lexington was also part of the set for the 2000 film Pearl Harbor. Corpus Christi's museum district is located near the USS Lexington. Some attractions located in the museum district are the Museum of Asian Cultures, the Corpus Christi Museum of Science and History, the South Texas Institute for the Arts, and the Harbor Playhouse Theatre, one of the oldest continually operating community theatres in Texas. Heritage Park is also in the museum district, where a number of older restored houses can be found. The downtown area, of which the museum district is a part, is home to skyscrapers such as One Shoreline Plaza, company offices, various shops, a very popular center of marinas, and Mirador de la Flor. Downtown also is home of the Texas Surf Museum, which explores the history of surfing and focuses on surf culture along Texas' 367-mile (591 km) coast, as well as K Space Contemporary, a nonprofit art organization promoting and presenting local, regional, and national contemporary art. 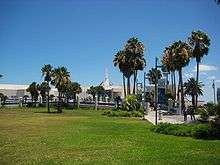 The Corpus Christi Botanical Gardens and Nature Center, also located in the city, hosts gardening programs from time to time. On Oso Bay near the Pharaoh Valley subdivision is the Hans and Pat Suter Wildlife Refuge. The refuge is known for seabird-watching. The nearby Pharaohs golf course also serves as a haven for coastal and migratory birds.

Directly east of Corpus Christi are Padre Island and Mustang Island, home to various municipal, state, and national parks, most notably the Padre Island National Seashore. The city is also near King Ranch, one of the world's largest ranches, upon which the movie Giant was based.

Corpus Christi also is the home of Midget Ocean Racing Fleet, also known as MORF, which promotes sailing in the Coastal Bend. The Wednesday night races held by MORF are the longest-running weekly races in the United States.

Films made in Corpus Christi

The city's location beside Corpus Christi Bay, the Gulf of Mexico, and Laguna Madre provides opportunities for water sports and nature tourism. Waterfowl hunting is available in the region for duck, geese, coot, and teal. White-winged dove and mourning dove are also hunted on private leases. The brushland inland from Corpus Christi is also ideal for hunting feral hogs and white-tailed deer.

The city has one of the highest average wind speeds of coastal cities in North America.[31] Combined with the Bay Front area along Ocean Drive, making the city an important destination for wind sports such as kite boarding, wind surfing, kite flying, and sailing. In 1990, Corpus Christi hosted the Windsurfing World Championships.

The Corpus Christi Skate Park opened on February 17, 2007. It is located in Cole Park on the shoreline of the Corpus Christi Bay near downtown. The 12,000-square-foot (1,100 m2) concrete park includes a skating bowl and a street course with stairs, railings, and flat surfaces.

Being a coastal city, Corpus Christi is a good spot for seabird watching. Popular spots include Blucher Park in downtown, the Hans and Pat Suter Wildlife Refuge along Oso Bay, Hazel Bazemore County Park along the Nueces River in Calallen, and the South Texas Botanic Garden and Nature Center along the Oso Creek.[32]

In 1852, the City of Corpus Christi was incorporated. Texas' 31st Legislature chartered the city as a political and corporate municipal entity in 1909. By ordinance, the city possesses power to "fix, alter and extend its boundaries."[33]

The Corpus Christi City Charter was adopted by public referendum in 1987, with amendments to the entire charter conducted January 19, 1991, and April 3, 1993. Further revisions to the charter were conducted on November 2, 2004, and November 7, 2006.[36] The charter consists of 10 articles and 41 sections regarding stipulations of home rule government, city council and city manager procedures, administration, planning, boards and commissions, etc. The Code of Ordinances of Corpus Christi was codified through Ordinance No. 028493, and adopted Feb. 23, 2010.[37]

The Texas 13th Court of Appeals is located in the Nueces County Courthouse in Corpus Christi.[38]

Del Mar College is a local community college begun in the 1940s at a location behind Wynn Seale Jr. High School. The main campus began with the administration building, which was constructed after World War II on Del Mar. The college grew to encompass a good portion of a residential addition called Southmoreland built from the Bohemian farm lands in the late 1930s. Del Mar now includes a west campus located in area of Corpus Christi that once was Cliff Maus Airport.

In 2015, WalletHub ranked Corpus Christi near the bottom, 138 out of 150 cities in America, for its low educational level and low income opportunities.[41] In 2014, Time magazine ranked Corpus Christi the second least literate city in America.[42] Time cited poor reading habits and literacy scores, low education attainment rates and the fact that less than one in five adults in Corpus Christi had at least a bachelor's degree in 2012, which was among the lowest ratios compared with other large cities.[42]

Libraries in the city include:[43]

The city is accessed by two major bridges, the Harbor Bridge (US 181) and the John F. Kennedy Causeway (PR 22). Both bridges are maintained by the Texas Department of Transportation.

Freight service from San Antonio to Corpus Christi is provided by the Union Pacific Railroad, but the original line, both freight and passenger, was the San Antonio, Uvalde and Gulf Railroad, which operated to Corpus Christi from 1913 to 1956.[45] Then the SAU&G, or "The Sausage", as it was commonly called, was merged into the Missouri Pacific Railroad. It was subsequently procured by the Union Pacific.[46]

Corpus Christi keeps a thriving and active relationship with these sister cities:[47]