This article is about the ship. For other uses, see Amistad (disambiguation).

La Amistad (pronounced: [la a.misˈtað]; Spanish for Friendship) was a 19th-century two-masted schooner built in the United States but owned by a Spaniard living in Cuba. It became renowned in July 1839 as the site of a slave revolt by Mende captives, who had been enslaved in Sierra Leone, and were being transported for sale between Havana, Cuba, and other Caribbean islands.[1] The African captives took control of the ship in July 1839, killing some of the crew and ordering the survivors to sail the ship to Africa. The Spanish survivors secretly maneuvered the ship north, and La Amistad was captured off the coast of Long Island by the brig USS Washington.[2] The Mende and La Amistad were interned in Connecticut while federal court proceedings were undertaken for their disposition. The owners of the ship and Spanish government claimed the slaves as property; but the US had banned the African trade and argued that the Mende were legally free.

La Amistad was a 19th-century two-masted schooner of about 120 feet (37 m). Built in the United States, La Amistad was originally named Friendship. It was renamed in Spanish after being purchased by a Spaniard. Strictly speaking, La Amistad was not a slave ship; it was not designed to transport large cargoes of slaves, nor did it engage in the Middle Passage of Africans to the Americas. The crew of La Amistad, lacking purpose-built slave quarters, placed half the captives in the main hold, and the other half on deck. The captives were relatively free to move about, which aided their revolt and commandeering of the vessel.

La Amistad engaged in the shorter, coastwise trade around Cuba and in the Caribbean. The primary cargo carried by La Amistad was sugar-industry products, and its normal route ran from Havana to its home port of Guanaja, on an island off Honduras. The ship also carried a limited number of passengers and, on occasion, slaves being transported for delivery or sale. The Mende captives who revolted while aboard La Amistad had been illegally transported from Africa to Havana aboard the larger slave ship Tecora.

In 1839 Amistad left Havana for Puerto Principe, Cuba, a smaller port near the sugar plantation where the slaves were to be delivered. The ship carried 53 Mende captives (49 adults and 4 children), who had been captured from Sierra Leone to be sold into slavery in Cuba.[3] On July 2, Sengbe Pieh (later known in the United States as Joseph Cinqué) led the captives in a revolt against the mostly Spanish crew on the ship.

The Mende had been transported to Havana aboard the slave ship Tecora. These captives were being taken along the coast to a smaller port closer to a sugar plantation. In the main hold below decks, the captives found a rusty file and sawed through their manacles. Once free, the men quickly went up on deck and, armed with machete-like cane knives,[4] attacked the crew, successfully gaining control of the ship. They killed the captain and some of the crew, but spared the navigator so he could guide them back to Africa.[3] While they demanded to be returned home, the navigator Don Pedro Montez deceived the Mende about the course, maneuvering the ship north along the North American coast. They reached the eastern tip of Long Island, New York. Discovered by the revenue cutter USRC Washington, La Amistad was taken into United States custody. The Mende were interned at New Haven, Connecticut, while the courts settled their legal status and conflicting international claims regarding La Amistad's ownership, as well as the status of its property, including the slaves.[3] 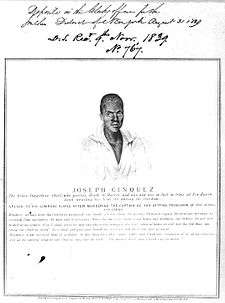 A widely publicized court case ensued in New Haven to settle legal issues about the ship and the status of the Mende captives. They were at risk of execution if convicted of mutiny. This became a cause célèbre among abolitionists in the United States. Since 1808, the United States and Britain had prohibited the international slave trade.[5] The ship's owners fraudulently described the Mende as having been born in Cuba and said they were being sold in the Spanish domestic slave trade, in order to avoid the international prohibition on the African slave trade. The court had to determine if the Mende were to be considered salvage and thus the property of naval officers who had taken custody of the ship (as was legal in such cases), the property of the Cuban buyers, or the property of Spain, as Queen Isabella II claimed, via Spanish ownership of the Amistad. A question was whether the circumstances of the Mendes' capture and transportation meant they were free and had acted as free men rather than slaves.[3]

On appeal, the United States v. The Amistad case reached the US Supreme Court. In 1841, it ruled that the Mende had been illegally transported and held as slaves, and had rebelled in self-defense. It ordered them freed.[3] Thirty-five[3] survivors returned to Africa in 1842, aided by funds raised by the United Missionary Society, a black group founded by James W.C. Pennington, a Congregational minister and fugitive slave in Brooklyn, New York, who was active in the abolitionist movement.[6]

After being moored at the wharf behind the US Custom House in New London, Connecticut, for a year and a half, La Amistad was auctioned off by the U.S. Marshal in October 1840. Captain George Hawford, of Newport, Rhode Island, purchased the vessel and then needed an Act of Congress passed to register it. He renamed it Ion. In late 1841, he sailed Ion to Bermuda and Saint Thomas with a typical New England cargo of onions, apples, live poultry, and cheese.

After sailing Ion for a few years, Hawford sold it in Guadeloupe in 1844. There is no record of what became of Ion under the new French owners in the Caribbean.

Between 1998 and 2000, artisans at Mystic Seaport, Mystic, Connecticut, built a replica of La Amistad, using traditional skills and construction techniques common to wooden schooners built in the 19th century, but using modern materials and engines. They christened the ship Freedom Schooner Amistad. The modern-day ship is not an exact replica of La Amistad, as it is slightly longer and has higher freeboard. There were no old blueprints of the original.

The new schooner was built using a general knowledge of the Baltimore Clippers and art drawings from the era. Some of the tools used in the project were the same as those that might have been used by a 19th-century shipwright, while others were powered. Tri-Coastal Marine,[7] designers of Freedom Schooner Amistad, used modern computer technology to develop plans for the vessel. Bronze bolts are used as fastenings throughout the ship. Freedom Schooner Amistad has an external ballast keel made of lead and two Caterpillar diesel engines. None of this technology was available to 19th-century builders.

Freedom Schooner Amistad was operated by Amistad America, Inc., based in New Haven, Connecticut. The ship's mission was to educate the public on the history of slavery, abolition, discrimination, and civil rights. The homeport is New Haven, where the Amistad trial took place. It has also traveled to port cities for educational opportunities. Freedom Schooner Amistad was the State Flagship and Tall ship Ambassador of Connecticut.[8] In 2013 Amistad America lost its non-profit organization status after failing to file tax returns for three years amid concern of the accountability for public funding from the state of Connecticut.[9][10][11]

Freedom Schooner Amistad made several commemorative voyages: one in 2007 to commemorate the 200th anniversary of the abolition of the Atlantic slave trade in Britain (1807) and the United States (1808),[12] and one in 2010 to celebrate the 10th anniversary of its 2000 launching at Mystic Seaport. It undertook a two-year refit at Mystic Seaport from 2010 and has subsequently been mainly used for sea training in Maine, and film work.[13]

A monument dedicated to the revolt on La Amistad stands in front of City Hall in New Haven, Connecticut, where much of the events related to the affair in the United States occurred.

The Amistad Research Center at Tulane University, New Orleans, Louisiana, is devoted to research about slavery, abolition, civil rights and African Americans; it commemorates the revolt of slaves on the ship by the same name. A collection of portraits of La Amistad survivors that were drawn by William H. Townsend during the survivors' trial are held in the collection of Yale University.[3]