It is considered, according to a 2011 study by the Spanish Ministry of Education as one of the best private universities in Latin America. It is the second university preferred by Argentine employers and the sixth in all Latin America.[1]

Its predecessor, the Catholic University of Buenos Aires (1910–1922) was founded by the Argentine episcopate in 1910, but their degrees, in law, were not recognized by the Argentine government, and the institution was closed in 1922.[2]

In 1955, Decree 6403 concerning the freedom of education enabled the creation of private universities with the authority to deliver academic qualifications. In 1956 the bishops decided to create the Catholic University of Argentina, formally founded on March 7, 1958.[2]

The part-time MBA program taught by the university has been accredited by the London-based Association of MBAs (AMBA) since 1998. 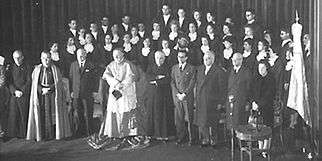 Like Buenos Aires itself, the Pontifical Catholic University of Argentina was founded twice.[4] The foundation of a catholic university was first discussed in the Eucharistic Congress of 1884. At the time, the Argentine Law 1420 of Common Education had dictated public compulsory, free and secular education in order to guarantee the separation of Church and State and prevent discrimination on the basis of religious adherence.

Eventually the idea lost its momentum, but in 1908 the first Congress of Catholic Youths underlined the importance of a well-rounded, integral education and promoted the foundation of a catholic university "in which students are trained to excel in liberal professions and are taught the core of catholic doctine". The Argentine Episcopate finally decided in favour of this initiative by founding the Catholic University of Buenos Aires in 1910. The bishops proceeded with the conception of this first university regardless of the poor legislation on private institutions of higher education that the country had at the time.

The Faculty of Law was its first and only one, and the curriculum was largely based on those of public universities plus compulsory courses on philosophy and history. The aforementioned lack of legislation conspired against the procurement of official accreditation and the Catholic University of Buenos Aires was forced to close its doors in 1922, little over a decade after being founded.

The Argentine Episcopate decided to found the university one again in its plenum in 1956 and two years later, the Catholic University of Argentina was created.[5]

"It was decided to proceed with the foundation of the UCA, adopting the necessary measures to precisely determine its character and structure [...] Therefore, our educational mission incorporates those academic fields that, being the heritage of mankind, intersect in the formation of man."
— UCA, La Fundación de la UCA (1958)[6]

Once the statutes of the institution were promulgated and approved, the university started receiving students to the original faculties:

UCA is widely considered to be one of the best institutions of higher education in Argentina. QS World University Rankings[7] has ranked UCA 2nd overall and 1st among private institutions in Argentina in 2013.[8] The university is also ranked 2nd in terms of employer preference.[8]

UCA is also labeld as a "Top Business School" with 4 out of 5 Palmes by EdUniversal. The French consulting company also ranked UCA's Business School 3rd in the nation.[9]

UCA's main campus is located in Puerto Madero, the financial center of downtown Buenos Aires. It is just 500 meters (546 yards) away from Casa Rosada and 3 lines of the Buenos Aires Underground intersect less than 600 meters away. 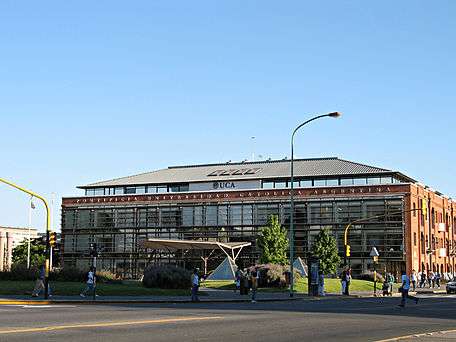