This article is about the municipality in Finland. For the river in southern Finland, see Vantaa (river).

Vantaa (Finnish pronunciation: [ˈʋɑntɑː]; Swedish: Vanda) is a city and municipality in Finland. It is part of the inner core of the Finnish Capital Region along with Helsinki, Espoo, and Kauniainen. With a population of 215,813 (31 March 2016[3]), Vantaa is the fourth most populated city of Finland.

Vantaa is bordered by Helsinki, the Finnish capital, to the south; Espoo to the southwest; Nurmijärvi to the northwest; Kerava and Tuusula to the north; and Sipoo to the east. The city encompasses 240.34 square kilometres (92.80 sq mi), of which 1.97 km2 (0.76 sq mi) is water.[2]

The largest airport in Finland, and the main airport and airline hub of Greater Helsinki, the Helsinki Airport, is located in Vantaa. Companies with headquarters in Vantaa include Finnair, Finavia,[7] Air Finland,[8] Blue1,[9] R-kioski, Tikkurila Oyj, Veikkaus Oy, and Metsähallitus. The city also hosts a science center, Heureka.

The city of Vantaa is bilingual, both Finnish and Swedish being official languages. 88.6% of the population are Finnish speakers, while 3% speak Swedish as their first language. 8.4% of the population speak a native language other than Finnish or Swedish.[10] 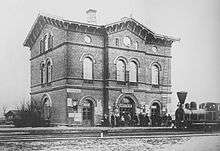 The old station building of Tikkurila 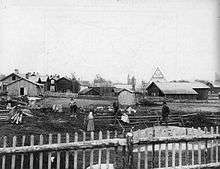 The historical parish of Helsingin Pitäjä in the late 1800s

Prior to the name Vantaa being taken into use in 1974, the area was known as Helsingin Pitäjä (Swedish: Helsinge; "Socken of Helsinki"). The earliest record of the area is as Helsinge in 1351 when king Magnus II of Sweden granted salmon fishing rights on the river Vantaa to the Estonian Padise monastery. The rapids of river Vantaa were known as Helsingfors, from which the current Swedish name of Helsinki derives. Early settlement in Vantaa was centered around the river, and from it the city's current coat of arms derived its imagery.

Since the 14th century, the road between Turku and Vyborg, King's Road, has run through Vantaa. The road brought significant attention to the city, and its location on the salmon rich river led to a permanent population.

Ore deposits in Helsingin Pitäjä had been discovered in the 1700s, but weren't utilized until Finland transferred to Russian control in the early 1800s. Ore extraction and processing lead to rapid industrialization in the area, with communities forming around locations like Tikkurila and Kerava. The industrial community in Tikkurila included an expeller pressing plant, which currently operates in the area as the paint manufacturer Tikkurila Oyj.

In 1862, the railway between Helsinki and Hämeenlinna was constructed, and one of its seven stations was built in Tikkurila, on its intersection with King's Road. The Swedish architect Carl Albert Edelfelt designed a Renaissance Revival styled station building, which is the oldest extant station building in Finland and (as of 1978) has been adapted into the Vantaa City Museum. The railway brought industry and induced population growth.

Helsingin Pitäjä gained municipality rights in 1865, after which it was named Helsingin maalaiskunta ("Rural Municipality of Helsinki").

In 1972, the municipality was renamed Vantaa (Swedish: Vanda) and promoted to a köping (market town) (i.e. Vantaan kauppala/Vanda köping). In 1974, the town got full city rights as Vantaan kaupunki/Vanda stad or "City of Vantaa".[11]

On October 11 2002, a bomb exploded in the mall of Myyrmanni in Myyrmäki district, killing 7 (including the perpetrator) and injuring 166 people. 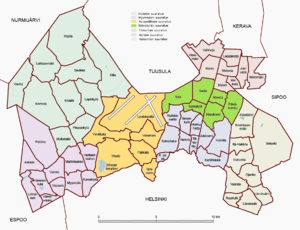 The districts and major regions of Vantaa

Vantaa is located in southern Finland, in the region of Uusimaa and the Helsinki sub-region. It is separated from the Gulf of Finland by Helsinki. Prior to the abolition of Finnish provinces in 2009, Vantaa was a part of the Southern Finland Province.

The city borders Helsinki, the Finnish capital, which is to the south and southwest. Other neighbouring municipalities are Espoo to the west; Nurmijärvi, Kerava, and Tuusula to the north; and Sipoo to the east. Vantaa is a part of the Finnish Capital Region, which is the inner core of the Greater Helsinki metropolitan area. 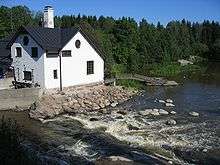 For its area, Vantaa has relatively few lakes. The city encompasses two natural lakes: Kuusijärvi in Kuninkaanmäki and Lammaslampi Pähkinärinne, Hämeenkylä. In addition to these, there is an artificial lake, Silvolan tekojärvi. Vantaa shares two lakes with Espoo: Odilampi and Pitkäjärvi.

Vantaa exhibits frequent exposed granite bedrock ground, which is common in Finland. Resulting from erosion in the last glacial period (about 10,000 years ago), elevated surfaces often lack soil (superficial deposits), revealing bare stone unsuitable for most plant life. Other geological impacts of the last Ice Age include a series of eskers running through central Vantaa. 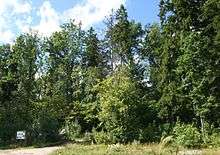 Vantaa has a humid continental climate (Köppen: Dfb), slightly above the threshold for subarctic classification. Although the city no longer (since 2009) has a coastline along the Baltic Sea, it is close enough to experience the mitigating influence of the sea and the Gulf Stream. The record low temperature in Vantaa is −35.9 °C (−32.6 °F) and the record high is 34.0 °C (93.2 °F).

The city is bilingual, both Finnish and Swedish being official languages.[10] A majority (88.6%) of the population are Finnish speakers while 3% speak Swedish as their first language. Vantaa's residents that speak a native language other than Finnish or Swedish stand at 8.4% of the population.

In 2011, 199,236 of the municipality's 203,001 residents lived in officially recognized urban areas (Finnish: taajama; Swedish: tätort). The remaining population lives in the few rural sections of Vantaa, such as those in Sotunki and Seutula.[14]

In 2015, 60.7% of the population were members of the Lutheran Church of Finland.

Of those employed, two thirds are in the private sector. The most common industries in Vantaa include the food, architectural engineering, and machine industries. In 2007, the unemployment rate was 6.3%.

The City of Vantaa has been in increasing debt since the early 2000s, due to a decrease in state funding and an increase in investments. A contributing factor to its situation is the high concentration of families with children, leading to comparatively larger social expenditure.[17] According to the former mayor Juhani Paajanen, the worst expenditures have ended, and the city's gains are increasing.[18] 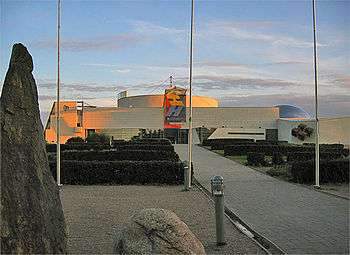 There are about 20 choirs in Vantaa,[19] like Vantaan Laulu and Vantaa Chamber Choir. Three actively performing concert bands Tikkurilan Soittokunta, Lumon Puhaltajat and Puhallinorkesteri Louhi exist at the east, north and west corners of the city respectively.[20] Vantaa Pops (Vantaan Viihdeorkesteri in Finnish), conducted by a Welshman Nick Davies,[21] is the only professional full symphonic pops orchestra in Finland.

Ankkarock was a rock music festival held every summer in Korso between 1989-2010.

Tikkurila is home of the major science centre in Finland, Heureka. In addition there is the city museum next to the railway station in Tikkurila which has exhibitions with various themes on local history. The museum is housed in the oldest station building in Finland, designed by Carl Albert Edelfelt and completed in 1861. The Finnish Aviation Museum is located in Vantaa, near Helsinki Airport.

The city hall of Vantaa, located in Tikkurila 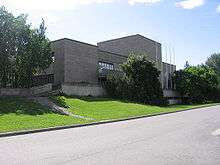 The main library of Vantaa, in Tikkurila

Vantaa has two hospitals, Peijas Hospital in Asola and Katriina Hospital in Seutula. Peijas is responsible for emergency and short-term health services, while Katriina specializes in long-term care and elderly care. The Vantaa branch of the HelMet library network has 10 libraries in Vantaa, with a total of 518,117 books in 2005. The main library is in Tikkurila. 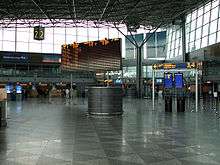 The Helsinki Airport (HEL), although associated with Helsinki, is located in Vantaa.

Vantaa infrastructurally serves as the transportational hub of the Helsinki metropolitan area. Several key freeways and highways, such as Ring III and Porvoonväylä, originate in or pass through the municipality. Additionally, two of the three railway lines exiting Helsinki pass through Vantaa, connecting the city's 14 stations. All long-distance trains exiting Helsinki stop at Tikkurila railway station in Vantaa, with the exception of train D.

Public transport in Vantaa consists of a bus network and commuter rail, provided by HSL/HRT and VR. Since the introduction of the Ring Rail Line in 2015, Vantaa has had a total of 14 stations. Key railway stations also act as central bus stations. The Ring Rail Line is speeding up the development in Western parts of Vantaa. For example, the Vantaankoski area is foreseen to double the amount of jobs in the future. Planning ideas are sought through an ideas competition.[23]

The largest airport in Finland, and the primary airport of Greater Helsinki, Helsinki Airport, is located in Vantaa. In 2015, it attracted a total of 16.4 million passengers.

Vantaa is twinned with:

A panoramic view of Jumbo Shopping Centre in Aviapolis, Vantaa. Ring III runs through the foreground.