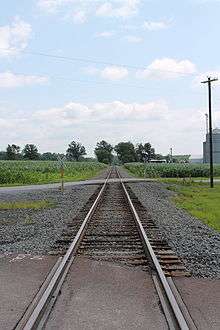 A vanishing point can be seen at the far end of this railroad.

A 2D construction of perspective viewing, showing the formation of a vanishing point

1. Projections of two sets of parallel lines lying in some plane πA appear to converge, i.e. the vanishing point associated with that pair, on a horizon line, or vanishing line H formed by the intersection of the image plane with the plane parallel to πA and passing through the pinhole. Proof: Consider the ground plane π, as y = c which is, for the sake of simplicity, orthogonal to the image plane. Also, consider a line L that lies in the plane π, which is defined by the equation ax + bz = d. Using perspective pinhole projections, a point on L projected on the image plane will have coordinates defined as,

This is the parametric representation of the image L′ of the line L with z as the parameter. When z → −∞ it stops at the point (x′,y′) = (−fb/a,0) on the x′ axis of the image plane. This is the vanishing point corresponding to all parallel lines with slope −b/a in the plane π. All vanishing points associated with different lines with different slopes belonging to plane π will lie on the x′ axis, which in this case is the horizon line.

2. Let A, B, and C be three mutually orthogonal straight lines in space and vA ≡ (xA, yA, f), vB ≡ (xB, yB, f), vC ≡ (xC, yC, f) be the three corresponding vanishing points respectively. If we know the coordinates of one of these points, say vA, and the direction of a straight line on the image plane, which passes through a second point, say vB, we can compute the coordinates of both vB and vC [2]

3. Let A, B, and C be three mutually orthogonal straight lines in space and vA ≡ (xA, yA, f), vB ≡ (xB, yB, f), vC ≡ (xC, yC, f) be the three corresponding vanishing points respectively. The orthocenter of the triangle with vertices in the three vanishing points is the intersection of the optical axis and the image plane.[2]

A reverse perspective is a drawing with vanishing points that are placed outside the painting with the illusion that they are "in front of" the painting.

Several methods for vanishing point detection make use of the line segments detected in images. Other techniques involve considering the intensity gradients of the image pixels directly.

There are significantly large numbers of vanishing points present in an image. Therefore, the aim is to detect the vanishing points that correspond to the principal directions of a scene. This is generally achieved in two steps. The first step, called the accumulation step, as the name suggests, clusters the line segments with the assumption that a cluster will share a common vanishing point. The next step finds the principal clusters present in the scene and therefore it is called the search step.

The process of mapping from the image to the bounded spaces causes the loss of the actual distances between line segments and points.

In the search step, the accumulator cell with the maximum number of line segments passing through it is found. This is followed by removal of those line segments, and the search step is repeated until this count goes below a certain threshold. As more computing power is now available, points corresponding to two or three mutually orthogonal directions can be found.

2.3D reconstruction: A man-made environment has two main characteristics – several lines in the scene are parallel, and a number of edges present are orthogonal. Vanishing points aid in comprehending the environment. Using sets of parallel lines in the plane, the orientation of the plane can be calculated using vanishing points. Torre [6] and Coelho [7] performed extensive investigation in the use of vanishing points to implement a full system. With the assumption that the environment consists of objects with only parallel or perpendicular sides, also called Lego-land, using vanishing points constructed in a single image of the scene they recovered the 3D geometry of the scene. Similar ideas are also used in the field of robotics, mainly in navigation and autonomous vehicles, and in areas concerned with object detection.