This article is about anamorphosis in art. For other uses, see Anamorphosis (disambiguation). 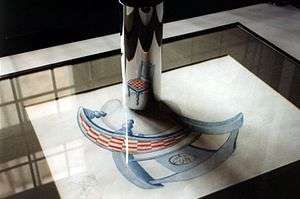 Anamorphosis is a distorted projection or perspective requiring the viewer to use special devices or occupy a specific vantage point (or both) to reconstitute the image. The word "anamorphosis" is derived from the Greek prefix ana‑, meaning back or again, and the word morphe, meaning shape or form.

There are two main types of anamorphosis: perspective (oblique) and mirror (catoptric).

Leonardo's Eye (Leonardo da Vinci, c. 1485) is the earliest known definitive example of perspective anamorphosis in modern times. The prehistoric cave paintings at Lascaux may also possess this technique because the oblique angles of the cave would otherwise result in distorted figures from a viewer's perspective.

Hans Holbein the Younger is well known for incorporating this type of anamorphic trick. His painting The Ambassadors is the most famous example for anamorphosis, in which a distorted shape lies diagonally across the bottom of the frame. Viewing this from an acute angle transforms it into the plastic image of a skull. During the seventeenth century, Baroque trompe l'oeil murals often used this technique to combine actual architectural elements with an illusion. When standing in front of the art work in a specific spot, the architecture blends with the decorative painting. The dome and vault of the Church of St. Ignazio in Rome, painted by Andrea Pozzo, represented the pinnacle of illusion. Due to neighbouring monks complaining about blocked light, Pozzo was commissioned to paint the ceiling to look like the inside of a dome, instead of building a real dome. As the ceiling is flat, there is only one spot where the illusion is perfect and a dome looks real.

Anamorphosis could be used to conceal images for privacy or personal safety. A secret portrait of Bonnie Prince Charlie, held at the West Highland Museum, Scotland, is painted in a distorted manner on a tray and can only be recognised when a polished cylinder is placed in the correct position. To possess such an image would have been seen as treachery in the aftermath of the 1746 Battle of Culloden.[1]

In the eighteenth and nineteenth centuries, anamorphic images had come to be used more as children's games than fine art. In the twentieth century some artists wanted to renew the technique of anamorphosis. Marcel Duchamp was interested in anamorphosis, and some of his installations are "visual paraphrases" of anamorphoses (See The Bride Stripped Bare by Her Bachelors, Even/The Large Glass). Jan Dibbets conceptual works, the so-called "perspective corrections" are examples of "linear" anamorphoses. In the late twentieth century, mirror anamorphosis was revived as children's toys and games.

Surrealist artist Salvador Dalí used extreme foreshortening and anamorphism in his paintings and works, including a 3-dimensional anamorphic living-room installation with custom furniture that looks like the face of Mae West when viewed from a certain spot.[2]:156[3]:28

In the work of contemporary artists

Un carré pour un square, is an anamorphosis realized by the French artist Jean-Max Albert in 1988. From the specific vantage point, the perspective of a square is seen, inscribed in Place Fréhel, Paris, France. The design is formed by a set of lines of narrow plates of Carrare marble imbricated in the walls of the surrounding buildings and in the vestiges of a former construction. A low wall and a pillar in masonry were created to shape the other side of the design.[4][5][6] In another example by the same artist, the specific vantage point is indicated by one of the Observation Sculptures [7] set in Paris, Parc de la Villette. The anamorphosis, this time, appears as a reflection of a bronze construction[8] This reflection discreetly shows the inclusion of a circle in a square in a triangle, in reference to the concept plan of the park by the architect Bernard Tschumi.[9][10]

From 2006, artist Jonty Hurwitz[11] pioneered the area of anamorphic sculpture using mathematical techniques and 3D printing. His work rose to fame in early 2013 when it was blogged by art critic Christopher Jobson on his Webby Award-winning site Colossal.[12] Hurwitz's work went viral on the internet, receiving 30 million views online.[13] The Savoy Hotel went on to take on Hurwitz as artist in residence to produce an anamorphic for their iconic River Room where they opened their restaurant called Kaspars.[14]

The Dutch artist Leon Keer made an optical illusion painting with a life-size mirror cylinder during the 3-D street painting event FringeMK in 2010.

Another form of anamorphic art is often called "Slant Art". Examples are the sidewalk chalk paintings of Kurt Wenner and Julian Beever where the chalk painting, the pavement and the architectural surroundings all become part of an illusion. Art of this style can be produced by taking a photograph of an object or setting at a sharp angle, then putting a grid over the photograph, another, elongated grid on the footpath based on a specific perspective, and reproducing exactly the contents of one into the other, one square at a time.

In November, 2011, an article published on the website of the Smithsonian magazine questioned if an anamorphic garden work by French artist François Abélanet featured in front of Paris' city hall, the Hôtel de Ville entitled, "Qui croire?" [Eng: "Who to believe?"] was the, "World’s Greatest New Artwork?"[15] citing an online video of it.[16]

Cinemascope, Panavision, Technirama and other widescreen formats use anamorphosis to project a wider image from a narrower film frame.

The system of anamorphic projection can be seen quite commonly on text written at a very flat angle on roadways, such as "Bus Lane" or "Children Crossing", which is easily read by drivers who otherwise would have difficulty reading as the vehicle approaches the text; when the vehicle is nearly above the text, its true abnormally elongated shape can be seen. Similarly, in many sporting stadiums, especially in Rugby football in Australia, it is used to promote company brands which are painted onto the playing surface; from the television camera angle, the writing appear as signs standing vertically within the field of play.

On some 0.5 liter Sprite bottles in Europe, an extra "bar code" was present. When the bottle is tilted towards the mouth while drinking, the bar code resolves into writing due to the anamorphic effect.

Much writing on shop windows is in origin anamorphic, as it was written mirror-reversed on the inside of the window glass.

In the twentieth century, artists began to play with perspective by drawing impossible objects. These objects included stairs that always go up or cubes where the back meets the front. Such works were popularized by artist M. C. Escher and mathematician Roger Penrose. Although referred to as impossible objects, such objects as the Necker Cube and the Penrose triangle can be built using anamorphosis. When viewed at a certain angle, such sculptures appear as the so-called impossible objects.

Since 1993, Myrna Hoffman’s company, OOZ & OZ, has been producing mirror anamorphosis art kits and activities for children, such as the "Morph-O-Scopes" kit.[17] Hoffman's kits have earned more than two dozen national toy awards.

Rick Wakeman's 1976 album No Earthly Connection featured front and back cover photographs that are mirror anamorphoses. The original vinyl release included a mirrored Mylar sheet which could be curled into a cylinder for viewing the images.[18]

In the 2007 detective film Anamorph, the plot line revolves around the solution of gruesome anamorphically distorted images.

The 2009 video game Batman: Arkham Asylum has a series of riddles posed by the classic Batman antagonist The Riddler, the solution of which is based on perspective anamorphosis.[19]

In 2013, Honda released a commercial which incorporated a series of illusions based on anamorphosis.[20]