"Calgary Airport" redirects here. For other airports in Calgary, see List of airports in the Calgary area.

YYC Calgary International Airport serves as headquarters for WestJet and as a hub airport for Air Canada and Air Canada Express. The airport is one of eight Canadian airports with US Border Preclearance facilities. The airport is operated by The Calgary Airport Authority as part of Transport Canada's National Airports System.[1] It is Canada's fourth busiest airport by passenger traffic and 3rd by aircraft movements, handling 15,475,759 passengers in 2015[5] and 250,953 movements in 2014.[4] In October 2008, The Calgary Airport Authority was named one of Alberta's Top Employers by Mediacorp Canada Inc.[7] YYC has both the longest runway and the tallest free-standing control tower (and second tallest overall) in Canada.[8] The airport underwent a major expansion project with its new International Facilities Project (IFP), which opened on October 31, 2016.

The airport opened in 1938 as McCall Field, named in honour of World War I ace and Calgary native Fred McCall. It is actually Calgary's third airport. The original facility was a grass airstrip in the then-town of Bowness, which opened in 1914. In 1928, it was replaced with Calgary Municipal Airport, in the Renfrew area.

In 1940, McCall Field was taken over by the Department of Transport, and not returned to the city until 1949. A new terminal opened in 1956, but quickly became obsolete with the dawn of the jet age. The city did not have nearly enough funding for the necessary upgrades, and sold it to Transport Canada in 1966, who renamed it Calgary International Airport.

In October 2016, days prior to opening the new international terminal, the airport was officially renamed YYC Calgary International Airport. According to the Calgary Airport Authority's then-President and Chief Executive Officer Garth Atkinson, "The iconic YYC brand has grown to symbolize the city we serve and businesses we support and is now used in the everyday language of Calgarians. We are very pleased that this brand has been formally incorporated into our official airport name.”[18]

Inside the domestic terminal

The airport is divided into two terminals. Terminal 1 (the Domestic Terminal) consists of concourses A, B, and C, and handles domestic flights. Terminal 2 (the International Terminal) opened on October 31, 2016, and handles all International and USA-bound flights. It consists of Concourses D and E. All terminals are connected behind security by a connections corridor, consisting of walkways, moving sidewalks, and a fleet of electric shuttles called YYC Link.

The domestic terminal consists of Concourses A, B, and C, and handles flights within Canada. This was the airport's only terminal before the new International Terminal opened on October 31, 2016. The terminal was designed by Stevenson, Raines, Barret, Hutton, Seton and Partners and completed in 1977.[19]

Gates 1 to 24 are located on this concourse. Gates 1 to 6 comprise regional operations for WestJet Encore. There are five security lanes dedicated to Concourse A flights. The A concourse contains the Swissport Calgary Chinook lounge (co-branded as the WestJet Lounge).[20] Concourse A used to handle international flights, but it no longer does as of October 31, 2016 with the opening of the new International Terminal.

Gates 21 to 40 are swing gates. Gates 21 to 24 will swing between Concourse A and B. USA-bound flights with USCBP pre-clearance used to operate from here, however they no longer do with the opening of the new International Terminal. The B concourse contains the Servisair Calgary Rocky Mountain lounge (co-branded as the WestJet Lounge).[20] There is no Star Alliance lounge accessible from Concourse B. Concourse B is currently undergoing reconfiguration for the transition of USCBP to domestic.

Old photo of airport before construction of the new terminal, Concourse C at right, A at left

Gates 31-40 are swing gates between Concourse B and C. Gate 38 is ground-boarded.

Comprising gates 50-65, Concourse C is used for domestic flights. Gates C51, 53, 61-65 are ground boarding and utilized for most Air Canada Express flights (excluding flights operating on the Bombardier CRJ200 and CRJ 705) and all Central Mountain Air flights. Passengers using gates 61-65 must take a shuttle bus from the main terminal to the aircraft, while Gates 51 and 53 use ramps to the jet bridge that passengers walk to get to and from the aircraft. Gates 50, 52, 54-59 are jet-bridged and are used for Air Canada and Air Canada Express flights. The Air Canada Maple Leaf Lounge is located immediately beyond security on Concourse C (note that no showers are available in the YYC lounge). Concourse C has five security lanes.

In 2010, the Calgary Airport Authority began plans and construction of a new international terminal, which is part of the IFP or International Facilities Project that will have more check-in counters, two new concourses (one for international departures [D] and another for U.S. Transborder Precleared departures [E] that will add up to 24 new aircraft gates), US and Canada Customs and Immigration halls, and a hotel (Marriott Hotel). The terminal is almost double the size of the current terminal at 186,000 square metres (two million square feet) and has a new baggage system with personal carts for each piece of baggage.[21] The terminal also houses two additional C gates, being designated as C70 and C72. The international terminal (while connected to the domestic terminal of Concourse A, B, and C) has a new check-in hall, Connections Centre (for all concourses) baggage system (Cristote), security facility, parking garage (Parkade 2), baggage claim, arrivals centre and new retail which includes for Concourse D: Starbucks, Tim Hortons, Green Chili, Thai Express, A&W, Subway and contemporary dining options such as Vin Room at YYC. Shopping includes Hudson News, Desigual, Lammles, Calgary Duty Free and many more. In Concourse E, several retail shops and restaurants include: Thai Express, OPA! of Greece, Spolumbo's Deli, Burger King, Hana Sushi, Jugo Juice, Menchie's Frozen Yogourt, Starbucks, Rocky Mountain Chocolates, Vino Volo, and The Kitchen by Wolfgang Puck. The international terminal is the first in Canada to include a call-to-gate system which announces flight gates prior to boarding so passengers may enjoy the amenities of the terminal.[21] The terminal is also connected via YYC LINK shuttle, walkway, and connections. The international terminal opened for service on October 31, 2016.

Concourse E is the one of two concourses operating in the international terminal (the other of which is Concourse D). Concourse E comprises 24 gates (E70-E75, and E80-E97), handling USA-bound flights. All outbound passengers go through United States Border Protection pre-clearance, where passengers clear customs in Canada so they can be treated upon arrival as domestic passengers. Gates E80-E87 are swing gates with Concourse D (International departures). 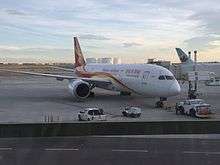 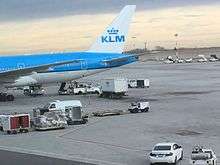 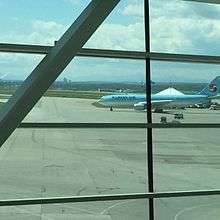 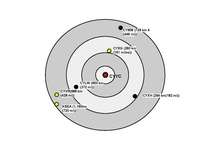 Nearby airports around YYC

The following airlines operate out of their own private facilities: 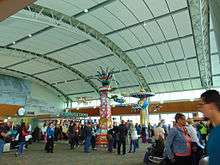 Interior of Concourse A 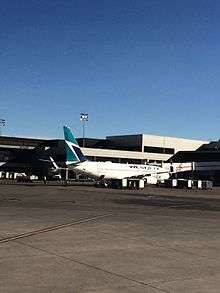 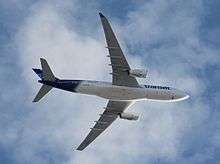 Air Transat A330 taking off from Calgary

Construction of the new runway resulted in April 2011 in the permanent closure of Barlow Trail from just north of McKnight Boulevard to Airport Road, and McCall Way's connection to Airport Road was also severed, though unlike Barlow the roadway remains intact to service hangars and other businesses southeast of the terminal area. Road access to the airport terminal area is via 36th Street N.E. and a newly constructed road tunnel under the new runway at Airport Trail, Deerfoot Trail via Airport Trail, or Metis Trail north to Country Hills Boulevard and west to Barlow and south into the airport. Airport Trail is to eventually connect with Stoney Trail to the east by way of an already-existing 96th Avenue connector once a missing piece of road is constructed, providing an additional access option.

At Bus Bay No. 7, across from Concourse A, Calgary Transit Route 100 connects the Arrivals level of the airport to the McKnight-Westwinds CTrain station and Route 430 to the North Pointe Terminal, and Route 300 a BRT direct to downtown. Route 300[30] provides direct access to and from Downtown Calgary via Centre Street North. Passengers must buy a day pass for $9.50 to board Route 300 departing the Airport, or have a monthly pass. This is available from the TVM at the bus stop or at the Mac's store in Concourse A. This extra cost is due to taxi and shuttle operators' fear of competition from the express route.[31] Also, the Airporter bus links the airport to several downtown hotels. Brewster transportation[32] and Banff Airporter[33] offer scheduled service to the nearby mountain tourist destinations including Banff. Taxis to downtown Calgary cost about $40, taking into account the longer route they must now travel because of the closure of Barlow Trail and McCall Way.

View of downtown Calgary from airport

There are only a few ground handling companies in Calgary but each provides different services to the airlines they serve.

WestJet TAC is the sole provider of ground handling services for WestJet and WestJet Encore at Calgary International Airport.

Apron II is the main cargo facility at the airport and can park up to four Boeing 747s. Apron VII is also used as a cargo facility, primarily for FedEx Express and Purolator Courier. FedEx is among the cargo carriers that use Calgary as a hub at Apron VII. Purolator has a facility in the northwest corner of the field adjacent to Apron VII. Apron VII previously accommodated just two Boeing 727s but has been able to park an additional three McDonnell Douglas MD-11s for FedEx since November 2004.

As of November 2007, expansion construction are in progress for Apron VII to allow seven parking pads, including three for Purolator and four for FedEx. UPS Airlines has begun construction of a new centre, including an apron directly southeast of FedEx's facility.

General aviation facilities are located on the south side of the field. These facilities include a Shell Aerocenter, an Esso Avitat, a customs building, and more.

Two hotels are located within airport property.[35] Other amenities include three passenger lounges (located in Concourses A, B and C),[36] coat and luggage storage (located on the Arrivals level),[37] and over 135 shops, restaurants, and services located both pre- and post-security.[38]

WestJet has its corporate headquarters on the airport property.[39] The company headquarters of Canadian North and North Cariboo Air occupy the 580 Palmer Road N.E. building, on the grounds of the airport.[40]

A new runway numbered 17L/35R became operational in 2014. It is 14,000 ft × 200 ft (4,267 m × 61 m),[2] which, according to the airport's website, is the longest runway in Canada. The old record holder was Calgary's own 17R/35L.[46] A tunnel crossing under the new runway connects Airport Trail with 36th Street NE. This replaces access from Barlow Trail, which closed on 3 April 2011.[47] In addition, an underpass under one of the new taxiways opened in 2013 allowing vehicle traffic from McCall Way to access a previously existing business park now surrounded by taxiways and runways. The city government hopes to connect Airport Trail with Metis Trail and Stoney Trail to ease traffic around the airport, while the airport authority is concerned that this connection could invite non-airport traffic and slow access for passengers.[48]

The long runway length can be attributed to the relatively high elevation, previously 3,557 ft (1,084 m) and now 3,606 ft (1,099 m),[2] of the airport and the need to support the largest passenger aircraft types. Aircraft require more distance to take off at higher elevations, because of the reduced air density associated with altitude.

In addition to the current runways in operation the airport has had two runways decommissioned over the years. Runway 02/20 was closed and part of it is still open as taxiway V. Runway 11/29 was decommissioned and ran where Palmer Road is now situated. The remnants of the runways and associated taxi ways are in various states of decay but can still be seen at the airport. 07/25 (now 08/26) served as the main east west runway until 10/28 (now 11/29) was built. The taxiway to 25 was closed when 02/20 was decommissioned meaning aircraft had to backtrack the length of the runway.