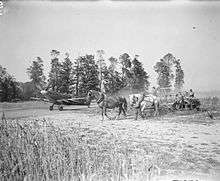 A Spitfire Mark IX of No. 443 Squadron taxies to dispersal at B-2 Bazenville, alongside a field where French farmers are gathering in the wheat

Originally formed as No. 127 (Fighter) Squadron in the fighter role in July 1942, it operated along the East Coast of Canada until late 1943, when it was selected for overseas service. Arriving in Britain on 8 February 1944, it was redesignated No. 443 Squadron at Bournemouth and was soon based at RAF Digby, Lincolnshire, together with Nos. 441 and 442 Squadrons as Article XV squadrons under the control of the British Royal Air Force.

Working up on Spitfire Mk.Vs from RAF Westhampnett, the squadron received Spitfire Mk.IXs the following month when a move was made to Holmesley South to form No. 144 Wing, 2nd Tactical Air Force and the squadron became operational. The first sorties were as bomber escorts and until the invasion in June the squadron carried out deep penetration missions using 90 gallon drop tanks. During the landings themselves, the squadron provided low level fighter cover and on 15 June it moved to France in the close-support and armed reconnaissance role. It was now heavily involved in ground attack sorties and continued to move forward following the Allied advance through Belgium and into the Netherlands to maintain its close air support of the ground forces. Having returned to RAF Warmwell for an air-firing course the squadron missed the Luftwaffe's New Years attack on Allied airfields. Unlike its two fellow squadrons, it did not return to Britain, but stayed on the continent, following the Allied armies advance into Germany equipped with the Spitfire Mk.XVI. With the end of the war the squadron joined the British Air Forces of Occupation until disbanding at Uetersen on 15 March 1946.