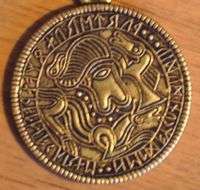 *Walhaz (ᚹᚨᛚᚺᚨᛉ) is a reconstructed Proto-Germanic word, meaning "foreigner", "stranger", "Roman", "Romance-speaker", or "Celtic-speaker". The term was used by the ancient Germanic peoples to describe inhabitants of the former Western Roman Empire, who were largely romanised and spoke Latin or Celtic languages. The adjectival form is attested in Old Norse valskr, meaning "French", Old High German walhisk, meaning "Romance", Modern German welsch, used in Switzerland and South Tyrol for Romance-speakers, Dutch Waals "Walloon", Old English welisċ, wælisċ, wilisċ, meaning "Romano-British", and Modern English Welsh. The form of these words imply that they are descended from a Proto-Germanic form *walhiska-.[1] It is attested in the Roman Iron Age Tjurkö Bracteate inscription as walhakurne "Roman/Gallic grain", apparently a kenning for "gold" (referring to the "bracteate" itself).

*Walhaz is almost certainly derived from the name of the tribe which was known to the Romans as Volcae (in the writings of Julius Caesar) and to the Greeks as Οὐόλκαι / Ouólkai (Strabo and Ptolemy).[2] This tribe occupied territory neighbouring that of the Germanic people and seem to have been referred to by the Old Germanic name *Walhaz (plural *Walhōz, adjectival form *walhiska-). It is assumed that this term specifically referred to the Celtic Volcae, because application of the first Germanic sound shift to that word produces the form *Walh-. Subsequently, this term *Walhōz was applied rather indiscriminately to the southern neighbours of the Germanic people, as evidenced in geographic names such as Walchgau and Walchensee in Bavaria.[1] These southern neighbours, however, were then already completely Romanised. Thus, Germanic speakers generalised this name first to all Celts, and later to all Romans. Old High German Walh became Walch in Middle High German, and the adjective OHG walhisk became MHG welsch, e.g. in the Romance of Alexander by Rudolf von Ems – resulting in Welsche in Early New High German and Modern German as the exonym for all Romance speakers. For instance, the historical German name for Trentino, the part of Tyrol with a Romance speaking majority, is Welschtirol and the historical German name for Verona is Welschbern.

Today, welsch is not in standard German usage except in Switzerland. This term is used there not only in a historical context, but also as a somewhat pejorative word to describe Swiss speakers of Italian and French.

In Central and Eastern Europe, the word for Romanic people was borrowed from the Germanic Goths (as *walhs) into Proto-Slavic some time before the 7th century. The first source using the word was the writings of Byzantine historian Kedrenos, from the mid-11th century.

From the Slavs the term passed to other peoples, such as the Hungarians ("oláh", referring to Vlachs, more specifically Romanians, "olasz", referring to Italians), Turks ("Ulahlar") and Byzantines ("Βλάχοι", "Vláhi") and was used for all Latin people of the Balkans.[3]

The Polish words Włoch (pl. Włosi), "Italian", and Włochy, "Italy", and the Slovenian lah, a mildly derogatory word for "Italian", can also be mentioned.

Numerous names of non-Germanic, and in particular Romance-speaking, European and near-Asian regions derive from the word Walh, in particular the exonyms

Consider the following terms historically present in several Central and Eastern European, and other neighbouring languages:

In the Pennsylvania German language, "Welsch" generally means "strange" as well as "Welsh", and is sometimes, although with a more restricted meaning, compounded with other words. For example, the words in Pennsylvania German for "turkey" is "Welschhaahne" and "Welschhinkel", which literally mean "French (or Romanic) chicken". "Welschkann" is the word for maize and literally translates to "French (or Romanic) grain." The verb "welsche" means "to jabber".

The Yiddish term "Velsh" or "Veilish" is used of Jews of Spanish and Italian origins, and in particular of their Hebrew script.

The element also shows up in family names: