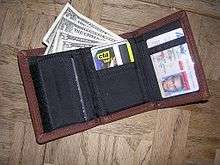 A trifold wallet with pockets for notes and cards, and a window to display an identification card
See also: Wallet (disambiguation)

A wallet, pouch or billfold, is a small, flat case that is used to carry such personal items as cash, credit cards, and identification documents (driver's license, identification card, club card, etc.), photographs, gift cards, business cards and other paper or laminated cards. Wallets are generally made of leather or fabrics, and they are usually pocket-sized but not always foldable.

The word “wallet” has been in use since the late 14th century to refer to a bag or a knapsack for carrying articles. The word may derive from Proto-Germanic.[1] The ancient Greek word kibisis, said to describe the sack carried by the god Hermes and the sack in which the mythical hero Perseus carried the severed head of the monster Medusa, has been typically translated as "wallet".[2][3] Usage of the term "wallet" in its modern meaning of "flat case for carrying paper currency" in American English dates to 1834 but this meaning was one of many in the 19th century and early 20th century.[1]

The classicist A. Y. Campbell set out to answer the question, "What...in ancient literature, are the uses of a wallet?" He deduced, as a Theocritean scholar, that "the wallet was the poor man's portable larder; or, poverty apart, it was a thing that you stocked with provisions."[4] He found that sometimes a man may be eating out of it directly but the most characteristic references allude to its being "replenished as a store", not in the manner of a lunch basket but more as a survival pack.

In recounting the life of the Elizabethan merchant, John Frampton, Lawrence C. Wroth describes the merchant as, "a young English-man of twenty-five years, decently dressed, ..., wearing a sword, and carrying fixed to his belt something he called a 'bowgett' (or budget), that is, a leathern pouch or wallet in which he carried his cash, his book of accounts, and small articles of daily necessity".[5]

In addition to money or currency, a wallet would also be used for carrying dried meat, victuals, "treasures", and "things not to be exposed". Wallets originally were used by early Industrial Americans. It was considered "semi-civilized" in 19th century America to carry one's wallet on one's belt. Ironically, at this time, carrying goods or a wallet in one's pocket was considered uncivilized and uncommon.[6]

In Spain, a wallet was a case for smoking paraphernalia: "Every man would carry a small sheaf of white paper in addition to a small leather wallet which would contain a flint and steel along with a small quantity of so-called yesca, being a dried vegetable fibre which a spark would instantly ignite."[7]

The traditional material for wallets is leather or fabric, but many other flexible flat sheet materials can be used in their fabrication. Non-woven textiles such as Tyvek are used, sometimes including reuse of waterproof maps printed on that material. Woven metals, such as fine mesh made of copper or stainless steel have been incorporated into wallets that are promoted as having electromagnetic shielding properties to protect against unauthorized scanning of embedded RFID tags. Do-it-yourself websites such as Instructables feature many projects for making wallets out of materials such as denim, Kevlar, or duct tape.

Some wallets, particularly in Europe where larger value coins are prevalent, contain a coin purse compartment. Some wallets have built-in clasps or bands to keep them closed. As European banknotes, such as Euros and Pounds, are typically larger than American banknotes in size, they do not fit in some smaller American wallets.