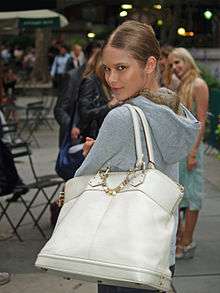 A handbag, also purse or pouch in North American English, is a handled medium-to-large bag that is often fashionably designed, often used by women, to hold personal items.

The term "purse" originally referred to a small bag for holding coins. In British English, it is still used to refer to a small coin bag. A "handbag" is a larger accessory that holds objects beyond currency, such as personal items. American English typically uses the terms purse and handbag interchangeably. The term handbag began appearing in the early 1900s. Initially, it was most often used to refer to men's hand-luggage. Women's bags grew larger and more complex during this period, and the term was attached to the accessory.[1] Handbags are valued for their stylishness as visual accessories as well as for their function.[2]

The verb "to handbag"[3] derives from UK prime minister Margaret Thatcher's habit of pulling scraps of paper out of her handbag in meetings and reading aloud the comments she had written on them.[4] The verb's more general meaning of "treating ruthlessly" came to symbolise Thatcher's whole style of government. Julian Critchley, one of her biggest Tory backbench critics, once said, "Margaret Thatcher and her handbag is the same as Winston Churchill and his cigar." [5] 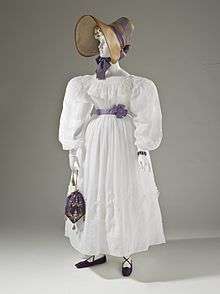 Women's fashion from 1830, including a reticule handbag from France.[6]

Early modern Europeans wore purses for one sole purpose: to carry coins. Purses were made of soft fabric or leather and were worn by men as often as ladies; the Scottish sporran is a survival of this custom. In the 17th century, young girls were taught embroidery as a necessary skill for marriage; this also helped them make very beautiful handbags.[7] By the late 18th century, fashions in Europe were moving towards a slender shape for these accessories, inspired by the silhouettes of Ancient Greece and Rome. Women wanted purses that would not be bulky or untidy in appearance, so reticules were designed. Reticules were made of fine fabrics like silk and velvet, carried with wrist straps. First becoming popular in France, they crossed over into Britain, where they became known as "indispensables."[8] Men, however, did not adopt the trend. They used purses and pockets, which became popular in men's trousers.[9]

The modern purse, clutch, pouch or handbag came about in England during the Industrial Revolution, in part due to the increase in travel by railway. In 1841 the Doncaster industrialist and confectionery entrepreneur Samuel Parkinson (of butterscotch fame) ordered a set of travelling cases and trunks and insisted on a travelling case or bag for his wife's particulars after noticing that her purse was too small and made from material that would not withstand the journey. He stipulated that he wanted various handbags for his wife, varying in size for different occasions and asked that they be made from the same leather that was being used for his cases and trunks to distinguish them from the then-familiar carpetbag and other travelers' cloth bags used by members of the popular classes. H. J. Cave (London) obliged and produced the first modern set of luxury handbags, as we would recognize them today, including a clutch and a tote (named as 'ladies travelling case'). These are now on display in the Museum of Bags and Purses in Amsterdam. H. J. Cave did continue to sell and advertise the handbags, but many critics said that women did not need them and that bags of such size and heavy material would 'break the backs of ladies.' H. J. Cave ceased to promote the bags after 1865, concentrating on trunks instead, although they continued to make the odd handbag for royalty, celebrities or to celebrate special occasions, the Queen's 2012 Diamond Jubilee being the most recent. However, H.J. Cave resumed handbag production in 2010.[10]

During the 1940s, the rationing of textiles for World War II led to the manufacturing of handbags made in materials like raffia[11] or crocheted from yarn. Some women crocheted their own small handbags from commercial patterns during this period. 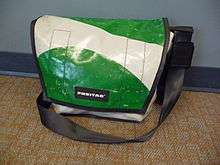 The oldest known purse dates back more than 5000 years, and was a pouch worn by a man, Ötzi the Iceman.[12] Men once carried coin purses. In early Modern Europe, when women's fashions moved in the direction of using small ornamental purses—which evolved into handbags—men's fashions were moving in another direction. Men's trousers replaced men's breeches during the course of the 18th and 19th centuries, and pockets were incorporated in the loose, heavy material. This enabled men to continue carrying coins, and then paper currency, in small leather wallets. Men's pockets were plentiful in 19th century and 20th century trousers and coats, to carry an ever-increasing number of possessions, such as pipes, matches, pocketknives, and so on, and they were an item frequently mended by their wives.[9] Women, on the other hand, have shown a strong demand for larger handbags that carry more items for everyday use.

Men's purses were revived by designers in the 1970s in Europe.[13] Since the 1990s, designers have marketed a more diverse range of accessory bags for men. The names man-purse and murse have been used. The designs are typically variations on backpacks or messenger bags, and have either a masculine or a more unisex appearance, although they are often more streamlined than a backpack and less bulky than a briefcase. These bags are often called messenger bags or organizer bags. The leather satchel is also common. Demand is strong after several years of popularity, possibly supported by the growing range of modern electronic devices men carry with them. Men's designer bags are produced by well-known companies such as Prada, Louis Vuitton, Coach, and Bottega Veneta in a variety of shapes and sizes. The global men's bag and small leather goods trade is a $4 billion a year industry.[14] Sales of men's accessories including "holdall" bags are increasing in North America.[15] 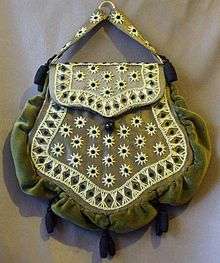 An 1875 Chatelaine bag, with a buckram frame and velvet body. It would have been "hooked" into the waist of the skirt. 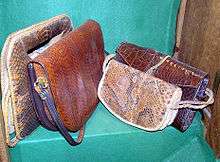 As a fashion accessory, handbags can be categorized according to the silhouette of the bag, as well as the type of handle. The current popular handbag silhouettes are (as of 2011):

According to type of handle, handbags are often categorized as:

Handbags that are designed for specific utilitarian needs include: 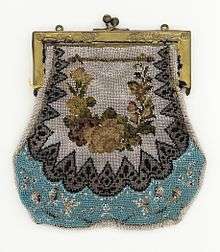 A distinction can also be made between soft-body handbags or frame handbags, where a metal frame supports the textile or leather of the bag. Frame bags often use a kissing lock closure, with two interlocking metal beads set on the top of the frame. Kissing locks were popular on handbags during the early- to mid-20th century, and remain popular with vintage collectors and in "retro" designs. These locks are still seen on smaller change purses.

Diamanté clasps were in use by the 1930s.[11] In later decades, designers found popular success with zipper enclosures, flaps, and even magnetic clasps hidden in the fabric of handbags.

The need to organize one's belongings is universal, thus handbags exist in differing forms in cultures around the world. People have been quite clever in thinking of ways to use the materials at hand to create their bags; this section shows many different examples of handbags.