The Western & Atlantic Railroad of the State of Georgia (W&A) is a historic, government-owned railroad which operates in the southeastern United States from Atlanta, Georgia to Chattanooga, Tennessee.

It was founded on December 21, 1836. The city of Atlanta was founded as the terminus of the W&A, with the terminus marked with the Atlanta Zero Mile Post. The line is still owned by the State of Georgia from Atlanta to CT Tower in Chattanooga; it is leased by CSX Transportation.

This line, originally built to 5 ft (1,524 mm) gauge,[4] is famous because of the Andrews Raid (commonly referred to as the Great Locomotive Chase), which took place on the W&A during the American Civil War on the morning of April 12, 1862.

In 1836, the Georgia General Assembly voted to build the Western & Atlantic Railroad of the State of Georgia to provide a link between the port of Savannah and the Midwest.[5] The initial route of that state-sponsored project was to run from Chattanooga to a spot east of the Chattahoochee River, in present-day Fulton County. The plan was to eventually link up with the Georgia Railroad from Augusta and the Macon and Western Railroad, which ran from Macon to Savannah. An engineer was chosen to recommend the location where the Western & Atlantic line would terminate. Once he surveyed various possible routes, he drove a stake into the ground near what is now Forsyth and Magnolia Streets. The zero milepost was later placed at that spot. In 1842, the zero milepost was moved to a spot immediately adjacent to the current day southern entrance to Underground Atlanta.[6] The area developed into a settlement, known as "Terminus", literally meaning "end of the line". In 1843, the small settlement of Terminus was incorporated as the city of Marthasville. Two years later, by Act of the Georgia General Assembly the city was renamed "Atlanta".[7]

Through 1870, it was called the State Road, and was operated directly by the state under a superintendent appointed by and reporting to the governor of Georgia. On December 27 of that year, operations were transferred to the Western & Atlantic Railroad Company, a group of 23 investors including Georgia's wartime governor Joseph E. Brown, who leased it (both tracks and rolling stock) from the state for $25,000 per month. This expired exactly 20 years later in 1890, when the Nashville, Chattanooga & St. Louis (NC&StL) leased it for 29 years. The railroad that was handed over to the NC&StL was in very poor condition. The locomotives that were transferred consisted only of those listed on the 1870 lease as property of the State, with all of the more modern engines purchased under Gov. Brown's Western & Atlantic Railroad Company having been sold to other railroads. While most of the passenger equipment was usable, almost all of the locomotives were condemnable and all of the freight cars were scrapped. The value of the locomotives was disputed for some twenty years. A major change in the new lease in 1890 stipulated that all improvements made to the road by the lessee would become property of the state at the termination of the lease. Included in the definition of improvements were modifications to the facilities, right of way and new equipment purchased for use over that line including but not limited to passenger cars, freight cars and locomotives. As it turned out, the NC&StL would continue to hold the lease to the Western & Atlantic Railroad until it was absorbed by its parent company, the Louisville and Nashville Railroad which was itself owned by the Atlantic Coast Line-one of the principal railroads in the Family Lines System and later CSX Transportation which continues to operate the line as the Western & Atlantic Subdivision. CSXT signed the current lease on the W&A from the State of Georgia in May 1986, set to expire on December 31, 2019.[8]

After being captured by the Union in mid-1864 and until the end of the war in 1865, the line was briefly operated by the United States Military Railroad (USMRR).

Trains departed from Atlanta at 8:50 a.m. and 7 p.m. and arrived there at 1:35 a.m. and 1:15 p.m. Not much has happened in between 1867 and now, track realingments in some areas resulted in height clearances and track improvements. 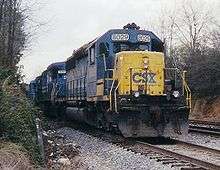 CSXT 8029 is waiting for another train at the siding at Tunnel Hill, Georgia, on the Western & Atlantic Sub.

On the morning of April 12, 1862, the locomotive General was stopped at Big Shanty, Georgia (now Kennesaw) so that the crew and passengers could have breakfast. During this time, James J. Andrews and his Union raiders (Andrews Raiders), stole the General. The only damage the raiders did involved cutting telegraph lines and raising rails, although an attempt to burn a covered bridge failed. The train's conductor, William A. Fuller, chased the General by foot and handcar. At Emerson, Georgia, Fuller commandeered the Yonah and rode it north to Kingston, Georgia. At Kingston, conductor Fuller got the William R. Smith and headed north to Adairsville. The tracks were broken by the raiders two miles (3 km) south of Adairsville and Fuller had to run the two miles on foot.

At Adairsville, Fuller got the locomotive Texas and chased the General. While all of this was happening, Andrews' Raiders were cutting the telegraph wires so no transmissions could go through to Chattanooga. With the Texas chasing the General in reverse, the chase went through Dalton, Georgia, and Tunnel Hill, Georgia.

At milepost 116.3 (north of Ringgold, Georgia), Andrews' Raiders abandoned the General and scattered from the locomotive just a few miles from Chattanooga. After the chase, Andrews and most of his raiders were caught. After they were found guilty, Andrews and seven members of his party were executed by hanging.

When the chase was over, both engines returned to service. After the "General"'s service with the W&A was over, she retired to the Nashville, Chattanooga and St. Louis Railway Union Depot in Chattanooga. In 1890, the Nashville, Chattanooga and St. Louis Railway overhauled the General and provided the locomotive for public events and to promote the line's Civil War history (to drum up the tourism trade) up through the 1930s. In 1962, 100 years after the chase, the L&N performed work necessary to allow the locomotive to operate under her own power for a series of appearances marking the 100th anniversary of the Andrews Raid. The premier appearance was her run from Atlanta to Chattanooga over the Western & Atlantic Railroad. After this run, the General would make excursion trips on various rail lines across the eastern US through most of the 1960s. In the late 60s, the General was to go to Kennesaw for another appearance when the City of Chattanooga officials halted it. The engine was put in storage in Louisville while a legal battle for its custody ensued. In 1971 the United States District Court confirmed the right of the railroad to dispose of the locomotive as it saw fit and it was moved to Kennesaw, Georgia (via a route bypassing Chattanooga) in 1972 where it was placed in the Big Shanty Museum. The Texas was retired shortly after the turn of the century, and was stored on a siding. In 1911, it was moved to Grant Park and later placed in the Atlanta Cyclorama.

Aside from a few track realignments by the Nashville, Chattanooga and St. Louis Railway, the W&A has changed little since 1862. The most significant changes were realignment during the creation of Lake Allatoona, with the tracks through Allatoona Pass removed. The Etowah River bridge has also been replaced. The famed Chetoogeta Mountain Tunnel in Tunnel Hill, Georgia, was abandoned in 1928; it was too small to accommodate the larger trains of the era, and a new tunnel was built nearby.

A marker indicating where the chase began is near the Big Shanty Museum in Kennesaw, Georgia. A marker for where the chase ended is at Milepost 116.3, north of Ringgold, Georgia, which is not far from the recently restored depot at Milepost 114.5. A monument dedicated to Andrew's Raiders is located at the Chattanooga National Cemetery; it has the General on top of the monument and a brief history of the great locomotive chase.