The Battle of Atlanta was a battle of the Atlanta Campaign fought during the American Civil War on July 22, 1864, just southeast of Atlanta, Georgia. Continuing their summer campaign to seize the important rail and supply center of Atlanta, Union forces commanded by William T. Sherman overwhelmed and defeated Confederate forces defending the city under John B. Hood. Union Maj. Gen. James B. McPherson was killed during the battle. Despite the implication of finality in its name, the battle occurred midway through the campaign, and the city did not fall until September 2, 1864, after a Union siege and various attempts to seize railroads and supply lines leading to Atlanta. After taking the city, Sherman's troops headed south-southeastward toward Milledgeville, the state capital, and on to Savannah with the March to the Sea.

The fall of Atlanta was especially noteworthy for its political ramifications. In the 1864 election, former Union general George B. McClellan, a Democrat, ran against President Lincoln, on a peace platform calling for a truce with the Confederacy. The capture of Atlanta and Hood's burning of military facilities as he evacuated were extensively covered by Northern newspapers, significantly boosting Northern morale, and Lincoln was reelected by a significant margin. 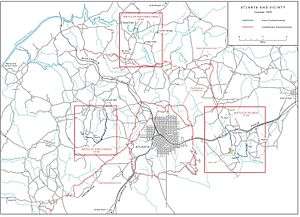 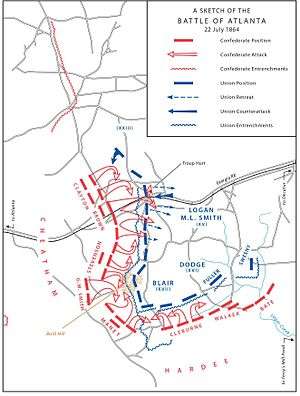 During the months leading up to the battle, Confederate Gen. Joseph E. Johnston had repeatedly retreated from Sherman's superior force. All along the railroad line, from Chattanooga, Tennessee, to Marietta, Georgia, a pattern was played and replayed: Johnston took up a defensive position, Sherman marched to outflank the Confederate defenses, and Johnston retreated again. After Johnston's withdrawal following the Battle of Resaca, the two armies clashed again at the Battle of Kennesaw Mountain, but the Confederate senior leadership in Richmond was unhappy with Johnston's perceived reluctance to fight the Union army, even though he had little chance of winning. Thus, on July 17, 1864, as he was preparing for the Battle of Peachtree Creek, Johnston was relieved of his command and replaced by Lt. Gen. John Bell Hood.[7] The dismissal and replacement of Johnston was one of the most controversial decisions of the civil war.[8] Hood, who was fond of taking risks,[7] lashed out at Sherman's army at Peachtree Creek, but the attack failed with more than two thousand five hundred Confederate casualties.[9]

Hood needed to defend the city of Atlanta, which was an important rail hub and industrial center for the Confederacy, but his army was small in comparison to the armies that Sherman commanded. He decided to withdraw, enticing the Union troops to come forward. McPherson's army closed in from Decatur, Georgia, to the east side of Atlanta. 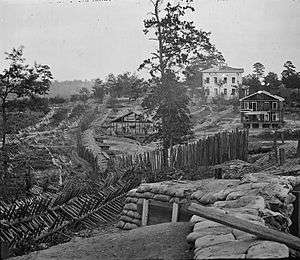 Palisades and chevaux de frise in front of the Potter (or Pondor) House, Atlanta, Georgia, 1864

Confederate sappers constructed a number of artillery emplacements covering the avenues of approach to Atlanta. The artillery in this fortification overlooks Peachtree Street. 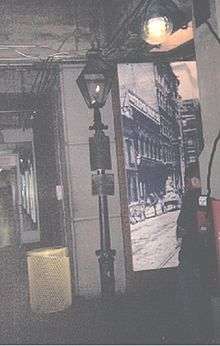 This historic gas lamp, located in the Underground Atlanta, was shelled by Union artillery prior to the Battle of Atlanta. There are two bronze plaques mounted on it, one of which commemorates Solomon (Sam) Luckie, 1 of 40 free blacks, who died from the wounds that he received from the shell that struck the lamp. Commemorated on the other plaque are the Confederacy, the Battle of East Atlanta, and one of the local men who fought in that battle.[10]

Meanwhile, Hood ordered Lt. Gen. William J. Hardee's corps on a march around the Union left flank, had Maj. Gen. Joseph Wheeler's cavalry march near Sherman's supply line, and had Maj. Gen. Benjamin Cheatham's corps attack the Union front. However, it took longer than expected for Hardee to get his men into position, and, during that time, McPherson had correctly deduced a possible threat to his left flank, and sent XVI Corps, his reserve, to help strengthen it.[1] Hardee's men met this other force, and the battle began. Although the initial Confederate attack was repulsed, the Union left flank began to retreat. About this time, McPherson, who had ridden to the front to observe the battle, was shot and killed by Confederate infantry.[11]

Near Decatur, Brig. Gen. John W. Sprague, in command of the 2nd Brigade, 4th Division of the XVI Corps,[12] was attacked by Wheeler's cavalry. Wheeler had taken the Fayetteville Road, while Hardee's column took the Flat Shoals Road toward McPherson's position. The Federals fled the town in a stampede, but managed to save the ordnance and supply trains of the XV, XVI, XVII, and XX corps. With the failure of Hardee's assault, Wheeler was in no position to hold Decatur, and fell back to Atlanta that night.[13] Sprague was later awarded the Medal of Honor for his actions.[14]

The main lines of battle now formed an "L" shape, with Hardee's attack forming the lower part of the "L," and Cheatham's attack on the Union front as the vertical member of the "L". Hood intended to attack the Union troops from both east and west. The fighting centered on a hill east of the city known as Bald Hill. The Federals had arrived two days earlier, and began to shell the city proper, killing several civilians.[13] A savage struggle, sometimes hand-to-hand, developed around the hill, lasting until just after dark. The Federals held the hill while the Confederates retired to a point just south of there. Meanwhile, two miles to the north, Cheatham's troops had broken through the Union lines at the Georgia railroad. In response, twenty artillery pieces were positioned near Sherman's headquarters at Copen Hill, and shelled the Confederates, while Logan's XV Corps regrouped and repulsed the Southern troops.[1]

The Union had suffered 3,400 casualties, including Maj. Gen. McPherson,[5] to the Confederate's 5,500.[4] This was a devastating loss for the already reduced Confederate army, but they still held the city. 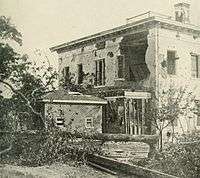 Sherman settled into a siege of Atlanta, shelling the city and sending raids west and south of the city to cut off the supply lines from Macon, Georgia. Both of Sherman's cavalry raids were defeated by superior southern horsemen.[13] Following the failure to break the Confederates' hold on the city, Sherman began to employ a new strategy. He swung his entire army in a broad flanking maneuver to the west.[13] Finally, on August 31, at Jonesborough, Georgia, Sherman's army captured the railroad track from Macon, pushing the Confederates to Lovejoy's Station. With his supply lines fully severed, Hood pulled his troops out of Atlanta the next day, September 1, destroying supply depots as he left to prevent them from falling into Union hands. He also set fire to eighty-one loaded ammunition cars, which led to a conflagration watched by hundreds.[15]

On September 2,[7] Mayor James Calhoun,[16] along with a committee of Union-leaning citizens including William Markham,[15] Jonathan Norcross, and Edward Rawson, met a captain on the staff of Maj. Gen. Henry W. Slocum, and surrendered the city, asking for "protection to non-combatants and private property".[15] Sherman, who was in Jonesborough at the time of surrender,[15] sent a telegram to Washington on September 3, reading, "Atlanta is ours, and fairly won".[17][18] He then established his headquarters there on September 7, where he stayed for over two months. On November 15, the army departed east toward Savannah, on what became known as "Sherman's March to the Sea".[7]

Ruins of Atlanta Union Depot after burning by Sherman's troops, 1864

The fall of Atlanta and the success of the overall Atlanta Campaign were extensively covered by Northern newspapers, and were a boon to Northern morale and to President Lincoln's political standing. The 1864 election was between former Union general George B. McClellan, a Democrat, and Abraham Lincoln. McClellan ran a conflicted campaign - McClellan was a Unionist who advocated continuing the war until the defeat of the Confederacy, but the Democratic platform included calls for negotiations with the Confederacy on the subject of a potential truce. The capture of Atlanta and Hood's burning of military facilities as he evacuated showed that a successful conclusion of the war was in sight, weakening support for a truce. Lincoln was reelected by a comfortable margin, with 212 out of 233 electoral votes.[7]

Maj. Gen. James B. McPherson, who was one of the highest-ranking Union officers killed in action during the Civil War, was mourned and honored by Sherman, who declared in his official report:

His public enemies, even the men who directed the fatal shot, ne'er spoke or wrote of him without expressions of marked respect; those whom he commanded loved him even to idolatry; and I, his associate and commander, fail in words adequate to express my opinion of his great worth. I feel assured that every patriot in America, on hearing this sad news, will feel a sense of personal loss, and the country generally will realize that we have lost, not only an able military leader, but a man who, had he survived, was qualified to heal the national strife which has been raised by designing and ambitious men.[19]

Despite the damage caused by the war, Atlanta recovered from its downfall relatively quickly; as one observer noted as early as November 1865, "A new city is springing up with marvelous rapidity".[20][21]

In 1880, Atlanta ranked among the fifty largest cities in the United States.[20] The battlefield is now urban, residential, and commercial land, with many markers memorializing notable events of the battle,[22] including McPherson's place of death. The marker was erected in 1956 by the Georgia Historical Commission.[23] To commemorate the 140th anniversary of the battle, in 2004, two new markers were erected in the Inman Park neighborhood. The Atlanta Cyclorama building, built in 1921 and listed on the National Register of Historic Places, is a museum located in Grant Park containing a panoramic painting of the battle.[20][24]

One notable establishment destroyed by Union soldiers was the Potter (or Ponder) House, built in 1857, and owned by Ephraim G. Ponder, a holder of 65 slaves before the war. In the battle, it was used by Confederate sharpshooters until Union artillery inflicted heavy damage. It was never rebuilt. One of Ponder's slaves, Festus Flipper, was the father of Henry Ossian Flipper, who later became the first African American cadet to graduate from the United States Military Academy at West Point.[25]

In 1962, two years short of the centennial of the battle, the country music singer/songwriter Claude King of Shreveport, Louisiana, released the hit song, "The Burning of Atlanta".[26]