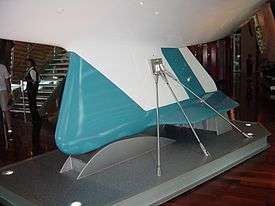 The Winged Keel is a sailboat keel originally designed by Ben Lexcen and made its first appearance on the 12-metre class yacht Australia II in the 1983 America's Cup. Along with Australia II's efficient sail design, this keel was one of the factors contributing to Australia II's success. The increased stability afforded by the winged keel, due mainly to the extra lead in the wings producing a very low centre of gravity, allowed Australia II to be as short and light as possible under the 12 meter rules, and still carry enough sail to beat the American entry. The wings were angled downwards at about 20 degrees, which, since they were lifting downwards, acted as a dihedral.

The lateral wings of a winged keel are usually of moderate aspect ratio, that uses a nearly horizontal foil, the "wing", at the bottom to provide additional span. Note that, contrary to classic configuration, the keel is "upside down" under the hull (the root chord is smaller than the tip (bottom) chord. Each wing acts as a winglet, effectively doubling the keel aspect ratio and reducing lift-induced drag. Because the yacht is heeled over when sailing upwind the leeward foil is closer to vertical and provides additional side force, reducing the leeway angle, hence making the boat sail upwind more efficiently.

Winged keels are generally found on high performance sailboats, if they are not prohibited by class rules. They are only of benefit for yachts sailing upwind where stability and the ability to produce side force are important and if the draft is limited by the class rule. Downwind the extra skin friction drag is a hindrance. Besides the performance benefits, winged keels can also be applied to pleasure boats as a way to reduce draft, allowing for greater versatility when gunkholing.

Winged keels may incorporate a significant amount of ballast where the wings join the keel. This feature makes these winged keels also another type of bulb keel.

This article is issued from Wikipedia - version of the 12/7/2014. The text is available under the Creative Commons Attribution/Share Alike but additional terms may apply for the media files.