Women's soccer, also known as women's football, is a popular sport in Australia. The sport has a high level of participation in the country both recreational and professional. Football Federation Australia (FFA) is the national governing body of the sport in Australia, organising the W-League, the Australian women's national team, and the nine state governing bodies of the game, among other duties. Women's participation of modern soccer has been recorded since the early 1920s. It has since become one of Australia's most popular women's team sports. 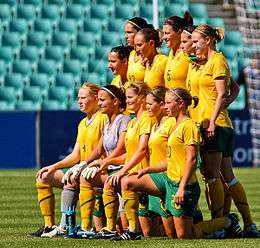 The Australia women's national team before a friendly against Italy in Sydney.

Some of the earliest games of soccer played in Australia were played in Brisbane in 1921.[1] Around that period, there were at least three active teams, with over 60 combined total players.[1] In September 1921, a game was played at the Brisbane Cricket Ground between a team from North Brisbane and a team from South Brisbane. The match had over 10,000 people in attendance.[1] The North Brisbane team wore red and the South Brisbane team wore blue.[2] The game was won by North Brisbane with a score of two to zero.[2] Early football outfits for women were not that different than outfits worn today: long socks, long-sleeved football jerseys, baggy shorts, and purpose worn football shoes.[1] Originally, football was not played by girls at schools in Queensland.[1] Instead, football was played by factory workers in Queensland.[1]

In 1922, a committee in Australia investigated the benefits of physical education for girls. They came up with several recommendations regarding what sports were and were not appropriate for girls to play based on the level of fitness required. It was determined that for some individual girls that for medical reasons, the girls should probably not be allowed to participate in tennis, netball, lacrosse, golf, hockey, and cricket. Football was completely medically inappropriate for girls to play. It was medically appropriate for all girls to be able to participate in, so long as they were not done in an overly competitive manner, swimming, rowing, cycling and horseback riding.[3]

During the 1970s, 1980s and 1990s, women's soccer saw a large expansion in the number of competitors.[5] Still, in 1993, the year the International Olympic Committee included women's soccer in the Olympic programme and chose Sydney to host the 2000 Summer Olympics, Australia did not have a female tournament. Afterwards the Australian Sports Commission started to give the annual $1 million funding to the Australian Women's Soccer Association, who launched the Women's National Soccer League, started to promote the national team, nicknamed "Matildas". The Australian Institute of Sport also started to offer female soccer scholarships. AWSA went defunct in 2001, being absorbed by Soccer Australia (current Football Federation Australia).[6][7]

Girls play soccer at school. Most of these school based players are not counted as registered soccer players.[8] 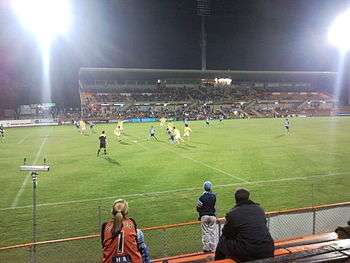 Since 2008, the W-League has been the highest women's football league in Australia.[9][10] The W-League replaced the long dormant Women's National Soccer League, which from 1996 to 2004, was the national top tier league.

In the W-League's first year in competition, it managed to attract a number of international players including ones from Canada, New Zealand, Singapore and Sweden. Games had an average attendance of around 500 fans and games were televised nationally on free-to-air.[11] The first season was won by the Queensland Roar. Sydney FC won the second season.[12] In the league's third season, international players competed from countries including New Zealand, Taiwan, Denmark and Canada.[13]

Many of the league's players are young, and the league is used by the FFA as a way of developing young players for national team selection.[10]

Some Australian players have played abroad, in national domestic competitions.[14] These players include Sharon Black and Alison Forman who formerly played in Denmark; Stacey Stocco, Joanne Peters, Cheryl Salisbury, and Dianne Alagich, who formerly played in the United States;[14] and Lisa De Vanna, Caitlin Foord, Samantha Kerr and Kyah Simon, all currently playing in the National Women's Soccer League in the U.S.

Girls can get anything they want out of soccer. It's a game that you can have individual as well as team achievements and it's a great environment. How many people can travel around the world and know people in so many countries?

The Matildas are Australia's women's national team.[15] The team gives female athletes opportunities to play in high level competition.[8] The national team first started representing the country during the 1970s.[15] In 1978, the team competed in their first international tournament.[16] This tournament was the World Women's Invitational in Taipai, Taiwan.[16] Prior to 1978, Australia had only ever really competed against New Zealand on an international level.[16]

In 1996, soccer made its debut as a women's sport at the Olympics.[17] However, the IOC states otherwise, explicitly recognising the USA as the winner of the first gold medals in the women's sport in 1996. Four years later, Australia hosted the Olympics and Cheryl Salisbury scored the team's first Olympic goal in their second match against Sweden. Australia finished seventh in that first Olympic appearance.[18][19] The team also competed in the 2004 Summer Olympics after qualifying by winning the Oceania qualifying tournament.[19] Their next Olympic appearance did not come until the 2016 Games, in which they advanced to the quarter-finals and lost there on a penalty shootout to the host Brazil.

The first FIFA Women's World Cup was held in 1991.[20] Australia did not qualify, having been beaten by New Zealand because of goal difference.[20] In 1995, Australia did qualify and finished last in the tournament.[20] In 1999, Australia finished eleventh out of sixteen.[21] In 2003, Australia finished last in their group.[21] The Matildas qualified for the first time as an AFC member in 2007, and had their best finish to date in the competition. They finished second to Norway in Group C and bowed out in the quarter-finals at the hands of Brazil. The Matildas matched that finish in 2011, finishing second to Brazil in Group D and losing in the quarter-finals to Sweden, and in 2015, finishing second to the USA in Group D and losing in the quarter-finals to Japan. The youngest player ever for the Matildas was 14.[8]

The Young Matildas are Australia's women's national under-20 team.[22] The team was initially organised as a U-19 team,[16] but became a U-20 team when FIFA changed the upper age limit for its top women's age-grade competition from 19 to 20 effective in 2006. They have competed in several tournaments including the 2002 FIFA U-19 Women's World Championship (predecessor to today's U-20 Women's World Cup).[16] That particular competition was held in Canada.[16] The Young Matildas finished fifth, the highest finish place in a FIFA sanctioned competition of any Australian women's national soccer team ever.[16]

The Mini Matildas are Australia's women's national under-17 team.[23] The team was established when FIFA announced that the U-17 Women's World Cup would be launched in 2008. Australia has yet to qualify for the World Cup at this age level.

The Deaf Matildas are Australian national deaf team.[24] Their first major tournament was the Deaflympic Games held in Australia in 2005.[24]