The Asian Football Confederation (AFC) is the governing body of association football in Asia and Australia. It has 47 member countries, mostly located on the Asian and Australian continent, but excludes the transcontinental countries with territory in both Europe and Asia – Azerbaijan, Georgia, Kazakhstan, Russia, and Turkey – which are instead members of UEFA. Three other states located along the western fringe of Asia – Cyprus, Armenia and Israel – are also UEFA members. On the other hand, Australia, formerly in the OFC, joined the Asian Football Confederation in 2006, and the Oceanian island of Guam, a territory of the United States, is also a member of AFC, in addition to Northern Mariana Islands, one of the Two Commonwealths of the United States. Hong Kong and Macau, although not independent countries (both are Special administrative regions of China), are also members of the AFC.

One of FIFA's six continental confederations, the AFC was formed officially on 8 May 1954 in Manila, Philippines, on the sidelines of the second Asian Games. The main headquarters is located in Kuala Lumpur, Malaysia. The current president is Sheikh Salman Bin Ibrahim Al-Khalifa of Bahrain.

The Asian Ladies Football Confederation (ALFC) is the section of the AFC who manage women's football in Asia. The group was independently founded in April 1968 in a meeting involving Taiwan, Hong Kong, Malaysia and Singapore. In 1986 the ALFC merged with the AFC.[4] The Asian Ladies Football Confederation helped organise the AFC Women's Asian Cup, first held in 1975, as well as the AFC's AFC U-19 Women's Championship and the AFC U-17 Women's Championship. 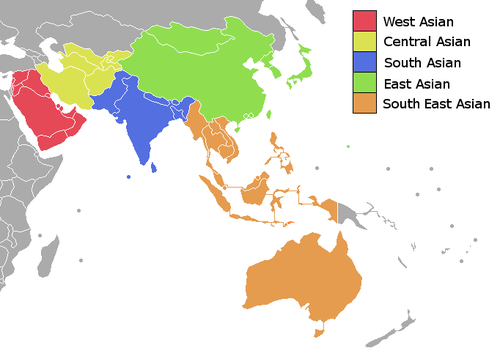 The AFC has 47 member associations split into five regions.

The AFC runs the AFC Asian Cup and AFC Women's Asian Cup, which determine the Champions of Asia, as well as the AFC Solidarity Cup. All three competitions are held every four years. The AFC also organises the AFC Futsal Championship, AFC Beach Soccer Championship, various age-level international youth football tournaments and the Asian qualifying tournament for the FIFA World Cup, FIFA Women's World Cup and for football at the Summer Olympics.

The top-ranked AFC competition is the AFC Champions League, which started in the 2002–03 season (an amalgamation of the Asian Champions Cup and the Asian Cup Winners Cup) and gathers the top 1–4 teams of each country (the number of teams depend on that country's ranking and can be upgraded or downgraded); this competition only gathered teams from top country.

A second, lower-ranked competition is the AFC Cup. This competition was launched by AFC in 2004. A third competition, the AFC President's Cup, which had started in 2005, was absorbed into the AFC Cup in 2015.[6]

The following are the sponsors of AFC (named "AFC Partners"):