FFA oversees the men's, women's, youth, Paralympic, beach and futsal national teams in Australia, the national coaching programs and the state governing bodies for the sport. It sanctions professional, semi-professional and amateur football in Australia. FFA made the decision to leave the Oceania Football Confederation (OFC), for which it was a founding member, and become a member of the Asian Football Confederation (AFC) on 1 January 2006.

FFA's origins lie as far back as 1911, with the formation of the Commonwealth Football Association.[2] This body was then superseded by the Australian Soccer Football Association, which was formed in 1921, with its headquarters in Sydney.[3] The Australian Soccer Football Association operated for forty years, was given FIFA provisional membership in November 1954[4] and this was confirmed in June 1956,[5] however in 1960, the association disbanded after being suspended from FIFA for the poaching of players from overseas.[3] In 1961 the Australian Soccer Federation was formed as a potential successor to the former governing body for the sport. However, this association was refused re-admittance to FIFA until outstanding fines had been paid, which was later done in 1963, seeing the new national body admitted to FIFA.[3]

In 1995, the Australian Soccer Federation formally changed its name to Soccer Australia.[3]

In 2003, following Australia's failure to qualify for the 2002 FIFA World Cup, allegations of fraud and mismanagement were leveled at Soccer Australia by elements within the Australian Press including the ABC.[11] Soccer Australia commissioned an independent inquiry known as the Crawford Report as a result of the Australian Government's threat to withdraw funding to the sport. The Australian Government could not interfere as any political interference would have constituted a breach of FIFA Statutes. The findings of the report were critically analysed by the board of Soccer Australia who believed that the recommendations contained therein were not capable of being implemented. The report recommended, among other things, the reconstitution of the governing body with an interim board headed by prominent businessman Frank Lowy. Some three months after Lowy's appointment Soccer Australia was placed into liquidation and Australia Soccer Association (ASA) was created without encompassing the Crawford Report recommendations and effectively disenfranchising all parties who had an interest in Soccer Australia. The Australian Government provided approximately $15 million to the ASA.[12]

On 1 January 2005 ASA renamed itself to Football Federation Australia (FFA), aligning with the general international usage of the word "football", in preference to "soccer", and to also distance itself from the failings of the old Soccer Australia. It coined the phrase "old soccer, new football" to emphasise this.[3]

On 1 January 2006, Football Federation Australia moved from the OFC to the AFC.[3] The move was unanimously endorsed by the AFC Executive Committee on 23 March 2005, and assented by the OFC on 17 April. The FIFA Executive Committee approved the move on 29 June, noting that "as all of the parties involved ... had agreed to the move, the case did not need to be discussed by the FIFA Congress", and was unanimously ratified by the AFC on 10 September.[13][14][15] FFA hoped that the move would give Australia a fairer chance of qualifying for the FIFA World Cup and allow A-League clubs to compete in the AFC Champions League, thereby improving the standard of Australian football at both international and club levels with improved competition in the region.[16]

In 2013, Australia was admitted as a full member to the ASEAN Football Federation (AFF), after they formally joined as an invite affiliation to the regional body in 2006.[21]

On 29 January 2015, after the defeat of Iraq and the United Arab Emirates during the 2015 AFC Asian Cup, West Asian Football Federation members reportedly sought to remove Australia from the AFC primarily due to "Australia benefiting hugely from Asian involvement without giving much in return".[22] 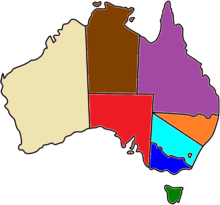 A diagram showing the nine member federations of FFA.

Football in Australian has used a federated model of national, states and territories governing bodies since the first state body was established in New South Wales in 1882. Local associations and regional zones were set up within the states and territories as football expanded and from time to time informal groups of clubs have augmented the formal structures. Today, there is one national governing body, nine state and territory member federations and over 100 district, regional and local zones and associations.

The following clubs are officially allowed to wear championship stars. The number in parentheses is for titles won.

The following clubs are not officially allowed to wear championship stars, but have won championship titles in both the National Soccer League and OFC Champions League (the respective national and continental competitions of their time). The number in parentheses is for titles won.