The World Food Prize is an international award recognizing the achievements of individuals who have advanced human development by improving the quality, quantity, or availability of food in the world. Since 1987, the prize has been awarded annually to recognize contributions in any field involved in the world food supply: food and agriculture science and technology, manufacturing, marketing, nutrition, economics, poverty alleviation, political leadership, and the social sciences. The World Food Prize Foundation is currently run by Kenneth M. Quinn, former U.S. Ambassador to Cambodia.[1] 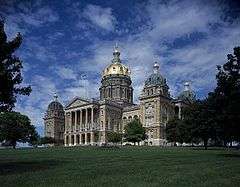 Conceived by Nobel Peace Prize Laureate Norman Borlaug, the prize emphasizes the importance of a nutritious and sustainable food supply for all people. Borlaug saw the prize as a means of establishing role models who would inspire others.

Since 1990, the World Food Prize has been sponsored by businessman and philanthropist, John Ruan.

Laureates are honoured and officially awarded their prize in Des Moines, Iowa, in a televised award ceremony held in the House Chamber of the Iowa State Capitol. The Award Ceremony coincides with the Norman E. Borlaug International Symposium, known as the Borlaug Dialogue, which addresses an issue related to hunger and food security each year. Past symposia have focused on the promises and challenges presented by biofuels for global development, the dual challenges of malnutrition and obesity, water insecurity and its impact on development and stability in the Middle East, and "The Green Revolution Redux: Can We Replicate the Single Greatest Period of Hunger Reduction in All Human History?".

In 2008, the World Food Prize Foundation received a $5 million contribution from Monsanto[2] to ensure the continuation of the annual World Food Prize International Symposium "Borlaug Dialogue". The funds supported a renewed fundraising campaign to transform the historic and former central Des Moines Public Library building into a public museum, the Hall of Laureates, to honor Norman Borlaug and the work of the World Food Prize laureates.

The prize was first funded by General Foods. Since 1990, the World Food Prize has been sponsored by the businessman John Ruan.

Primary sponsors of the World Food Prize include the Government of the State of Iowa, The Iowa Economic Development Authority, The John Ruan Foundation Trust, and the Rockefeller Foundation. Other sponsors include over 100 charitable foundations, corporations and individuals, including the Bill and Melinda Gates Foundation, Dupont Pioneer, the Howard G. Buffet Foundation, the John Deere Foundation, the Mathile Institute for the Advancement of Human Nutrition, Monsanto, Ruan Transportation Management Systems, Claudia and Paul Schickler, Kemin Industries, Land O'Lakes and others.[3]

The announcement of the World Food Prize laureate or laureates is made in the late spring or early summer prior to her, his or their formal recognition in October.

The World Food Prize Hall of Laureates is located in the former Central Library on the Principal Riverwalk in downtown Des Moines, Iowa, which was constructed in the early 1900s as part of the City Beautiful movement.

The World Food Prize Hall of Laureates honours the dreams of Norman Borlaug, recipient of the Nobel Peace Prize in 1970 and founder of the World Food Prize, and those of John Ruan, a Des Moines businessman. John Ruan had envisioned Des Moines as the "food capital of the world", and advocated for a World Trade Center to be built in the city in the 1980s. Such a center was never built, but Ruan's endowment of the World Food Prize in 1990 set in motion a goal to secure a home for such an organization. John Ruan III began the fundraising efforts with a donation of $5 million from his family in 2001. Ten years and $30 million later, the renovation was finished in time for the 25th anniversary of the World Food Prize.[8] The original staircase to the east entrance had been removed in 1955 but was restored during the renovation. Also restored was the acroterium which had been destroyed in the mid-1930s.

A portion of project funding was devoted to commissioning dozens of pieces of artwork by artists from Iowa and around the world to be displayed in the building. In addition, a new fountain and statues of John Ruan and Norman Borlaug can be found in the gardens on the west side of the building.[8]

The Borlaug-Ruan International Internship provides high school students an opportunity for an eight-week hands-on experience, working with world-renowned scientists and policy makers at leading research centres around the world.

The internship was founded in 1994 and has funded over one hundred Borlaug-Ruan interns who have travelled to Bangladesh, Brazil, China, Costa Rica, Egypt, Ethiopia, India, Indonesia, Kenya, Malaysia, Mexico, Peru, the Philippines, Taiwan, Thailand and Trinidad.

The Iowa Hunger Summit has taken place during the week of the World Food Prize events since 2007. The event celebrates the role Iowans play in fighting hunger and advancing food security each year. The activities are open to the public and aim to encourage interaction among leaders in the community, government, schools, places of worship, and organizations.[9]

The 2013 award to the seed biotechnology industry (Monsanto, Syngenta and European Federation of Biotechnology) has drawn criticism from opponents of genetically modified crops.[6][10][11][12] In 2014, three people were arrested who protested the World Food Prize in Des Moines.[13]