For other uses, see Trinidad (disambiguation).

Trinidad and Tobago on a world map

Moruga - Christopher Columbus monument. Columbus landed here on his third voyage in 1498. This is on the southern coast of the island of Trinidad, West Indies

Trinidad (Spanish: "Trinity") is the larger and more populous of the two major islands and numerous landforms which make up the island nation of Trinidad and Tobago. The island lies 11 km (6.8 mi) off the northeastern coast of Venezuela and sits on the continental shelf of South America. Though part of the South American continent, from a socio-economic standpoint it is often referred to as the southernmost island in the Caribbean. With an area of 4,768 km2 (1,841 sq mi), it is also the sixth largest in the West Indies.

Many believe the original name for the island in the Arawaks' language was "Iëre" which meant "Land of the Hummingbird". Some believe that "Iere" was actually a mispronunciation or corruption by early colonists of the Arawak word "Kairi" which simply means "Island". Christopher Columbus renamed it "La Isla de la Trinidad" ("The Island of the Trinity"), fulfilling a vow he had made before setting out on his third voyage of exploration.[2]

Caribs and Arawaks lived in Trinidad long before Christopher Columbus encountered the islands on his third voyage in 1498. Tobago changed hands between the British, French, Dutch and Courlanders, but eventually ended up in British hands. Trinidad remained Spanish until 1797, but it was largely settled by French colonists from the French Caribbean, especially Martinique.[3] In 1889 the two islands became a single British Crown colony. Trinidad and Tobago obtained self-governance in 1958 and independence from the United Kingdom in 1962.[4]

Major landforms include the hills of the Northern, Central and Southern Ranges (Dinah ranges), the Caroni, Nariva and Oropouche Swamps, and the Caroni and Naparima Plains. Major river systems include the Caroni, North and South Oropouche and Ortoire Rivers. There are many other natural landforms such as beaches and waterfalls. Trinidad has two seasons per calendar year: the rainy season and the dry season. El Cerro del Aripo, at 940 metres (3,084 ft), is the highest point in Trinidad. It is part of the Aripo Massif and is located in the Northern Range on the island, northeast of the town of Arima. 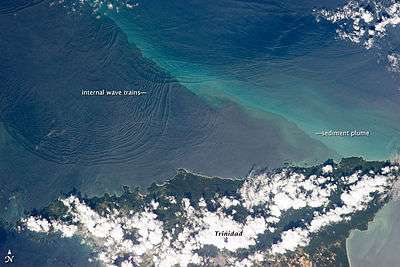 Internal waves around northern Trinidad, as seen from space

The island of Trinidad has a rich biodiversity (see the link above for more detail). The fauna is overwhelmingly of South American origin. There are about 100 species of mammals including the Guyanan red howler monkey, the collared peccary, the red brocket deer, the ocelot and about 70 species of bats.[9] There are over 400 species of birds including the endemic Trinidad piping-guan. Reptiles are well represented, with about 92 recorded species including the largest species of snake in the world, the green anaconda, the spectacled caiman, and one of the largest lizards in the Americas, the green iguana. The largest of turtles (the leatherback turtle) nests on Trinidad's eastern and northern beaches. There are 37 recorded frogs, including the beautiful, little El Tucuche golden tree frog, and the more widespread, huge cane toad. About 43 species of freshwater fishes are known from Trinidad, including the well known guppy. It is estimated that there are at least 80,000 arthropods, inclusive of over 600 species of butterflies.

It is an industrial island with a diversified economy, based to a large extent on oil, natural gas, industry and agriculture. It is one of the leading gas-based export centres in the world, being the leading exporter of ammonia and methanol and among the top five exporters of liquefied natural gas. This has allowed Trinidad to capitalise on the biggest mineral reserves within its territories. It is an oil-rich country and stable economically. 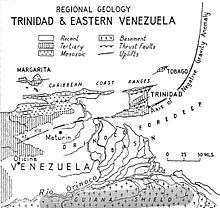 Regional Geology of Trinidad and Venezuela[10] 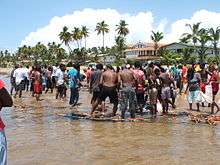 The Venezuela Tertiary Basin is a subsidence basin formed between the Caribbean and South American plates, and is bounded on the north by the coast ranges of Venezuela and the Northern Range of Trinidad, and bounded on the south by the Guayana shield.[11] This Guayana shield supplied fine-grained clastic sediments, which with the subsidence, formed a regional negative gravity anomaly and growth faults.[12] Oil and gas discoveries from the Pliocene Moruga Group include Teak (1968), Samaan (1971), Poui (1972) and Galeota.[13] These fields are mainly faulted anticline traps producing from depths of 1.2 km to 4.2 km subsea, with Teak possessing a hydrocarbon column almost 1 km thick.[12]