For other uses, see Yeoman (disambiguation). 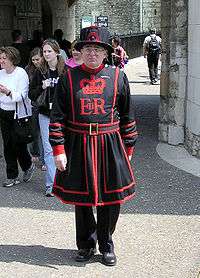 A Yeoman Warder at the Tower of London in England

A yeoman /ˈjoʊmən/ was a member of a social class in late medieval to early modern England. In early recorded uses, a yeoman was an attendant in a noble household; hence titles such as "Yeoman of the Chamber", "Yeoman of the Crown", "Yeoman Usher", "King's Yeoman", Yeomen Warders, Yeomen of the Guard. The later sense of yeoman as "a commoner who cultivates his own land" is recorded from the 15th century; in military context, yeoman was the rank of the third order of "fighting men", below knights and squires, but above knaves. A specialized meaning in naval terminology, "petty officer in charge of supplies", arose in the 1660s.

The term is first recorded c. 1300. Its etymology is unclear. It may be a contraction of Old English iunge man, meaning "young man" (compare knave, meaning "boy"), but there are alternative suggestions, such as derivation from an otherwise unattested *geaman (Old Frisian gaman, from gea- "province") meaning "villager; rustic". The Canon's Yeoman's Prologue and Tale appears in Geoffrey Chaucer's Canterbury Tales, written between 1387 and 1400.

During the late 14th to 18th centuries, yeomen were farmers who owned land (freehold, leasehold or copyhold). Their wealth and the size of their landholding varied. Sir Anthony Richard Wagner, Garter Principal King of Arms, wrote that "a Yeoman would not normally have less than 100 acres" (40 hectares) "and in social status is one step down from the Landed gentry, but above, say, a husbandman."[1] Often it was hard to distinguish minor landed gentry from the wealthier yeomen, and wealthier husbandmen from the poorer yeomen.

The Concise Oxford Dictionary (edited by H.W. & F.G. Fowler, Clarendon Press, Oxford, 1972 reprint, p. 1516) states that a yeoman was "a person qualified by possessing free land of 40/- (shillings) annual [feudal] value, and who can serve on juries and vote for a Knight of the Shire. He is sometimes described as a small landowner, a farmer of the middle classes."

The term had a military sense as in the Yeomanry Cavalry of the late 18th century and Imperial Yeomanry of the late 1890s. The 'yeoman archer' was unique to England and Wales (in particular, the south Wales areas of Monmouthshire with the famed archers of Gwent; and Glamorgan, Crickhowell, and Abergavenny; and South West England with the Royal Forest of Dean, Kingswood Royal Forest near Bristol, and the New Forest). Though Kentish Weald and Cheshire archers were noted for their skills, it appears that the bulk of the 'yeomanry' was from the English and Welsh Marches (border regions).

The original Yeomen of the Guard (originally archers) chartered in 1485 were most likely of Brittonic descent, including Welshmen and Bretons. They were established by King Henry VII, himself a Briton who was exiled in Brittany during the Wars of the Roses. He recruited his forces mostly from Wales and the West Midlands of England on his journey to victory at Bosworth Field.

Yeomen were often constables of their parish, and sometimes chief constables of the district, shire or hundred. Many yeomen held the positions of bailiffs for the High Sheriff or for the shire or hundred. Other civic duties would include churchwarden, bridge warden, and other warden duties. It was also common for a yeoman to be an overseer for his parish. Yeomen, whether working for a lord, king, shire, knight, district or parish served in localised or municipal police forces raised by or led by the landed gentry.

Some of these roles, in particular those of constable and bailiff were carried down through families. Yeomen often filled ranging, roaming, surveying, and policing roles. In Chaucer's Friar's Tale, a yeoman who is a bailiff of the forest who tricks the Summoner turns out to be the devil ready to grant wishes already made.

The earlier class of franklins (freemen or French or Norman freeholders) were similar to yeomen: wealthy peasant landowners, freeholders or village officials. They were typically village leaders (aldermen), constables or mayors. Franklin militias were similar to later yeomanries. Yeomen took over those roles in the 14th century as many of them became leaders, constables, sheriffs, justices of the peace, mayors and significant leaders of their country districts. It was too much, for even ‘valets’ known as ‘yeoman archers’ were forbidden to be returned to parliament, indicating they even held power at a level never before held by the upper class of commoners. In districts remoter from landed gentry and burgesses, yeomen held more official power: this is attested in statutes of the reign of Henry VIII indicating yeomen along with knights and squires as leaders for certain purposes.

The yeoman also comprised a military class or status (usually known as in the third order of the fighting class, between squire and page). By contrast, in contemporary feudal continental Europe, the divide between commoners and gentry was far wider: though a middle class existed, it was less esteemed than the yeoman of England of that time.

In the United States, yeomen were identified in the 18th and 19th centuries as non-slaveholding, small landowning, family farmers. In Southern areas where land was poor, like East Tennessee,[2] the landowning yeomen were typically subsistence farmers, but some managed to grow some crops for market. Whether they engaged in subsistence or commercial agriculture, they controlled far more modest landholdings than those of the planters, typically in the range of 50–200 acres. In the North, practically all the farms were operated by yeoman farmers as family farms.

Thomas Jefferson was a leading advocate of the yeomen, arguing that the independent farmers formed the basis of republican values.[3] Indeed, Jeffersonian Democracy as a political force was largely built around the yeomen.[4] After the Civil War, organizations of farmers, especially the Grange, formed to organize and enhance the status of the yeoman farmers.[5]

In the U.S. Navy and the U.S. Coast Guard, the enlisted rating of yeoman describes an enlisted service member who performs administrative and clerical work ashore and embarked aboard vessels at sea. They deal with protocol, naval instructions, enlisted evaluations, commissioned officer fitness reports, naval messages, visitors, telephone calls and mail (both conventional and electronic). They organize files and operate office equipment and order and distribute office supplies. They write and type business and social letters, notices, directives, forms and reports. On September 29, 2016 the United States Navy discontinued enlisted ratings after two hundred and forty one years of use. Service members were thereafter to be referred to solely by their rank and would hold a Navy Operations Specialty (NOS) instead of a rate.