The Tone River (利根川, Tone-gawa) is a river in the Kantō region of Japan. It is 322 kilometers (200 mi) in length (the second longest in Japan after the Shinano) and has a drainage area of 16,840 square kilometers (6,500 sq mi) (the largest in Japan). It is nicknamed Bandō Tarō (坂東太郎); Bandō is an obsolete alias of the Kantō Region, and Tarō is a popular given name for an oldest son.[1] It is regarded as one of the "Three Greatest Rivers" of Japan, the others being the Yoshino in Shikoku and the Chikugo in Kyūshū.

The source of the Tone River is at Mount Ōminakami (大水上山) (1,831 meters (6,007 ft)) in the Echigo Mountains, which straddle the border between Gunma and Niigata Prefectures in Jōshin'etsu Kōgen National Park.[1] The Tone gathers tributaries and pours into the Pacific Ocean at Cape Inubō, Choshi in Chiba Prefecture.[2]

Major tributaries of the Tone River include the Agatsuma, Watarase, Kinu, Omoi, and the Kokai. The Edo River branches away from the river and flows into Tokyo Bay.

Rivers in Kantō in the 16th century

Rivers in Kantō in the 20th century

The Tone River was once known for its uncontrollable nature, and its route changed whenever floods occurred. It is hard to trace its ancient route, but it originally flowed into Tokyo Bay along the route of the present-day Edo River, and tributaries like the Watarase and Kinu had independent river systems. For the sake of water transportation and flood control, extensive construction began in the 17th century during the Tokugawa shogunate, when the Kantō region became the political center of Japan.[3] The course of the river was significantly changed, and the present route of the river was determined during the Meiji period.[4] Its vast watershed is thus largely artificial.

Two ships of the Imperial Japanese Navy were named after the river, one of World War I vintage and another from World War II, the lead ship of its class.

As a result of the Fukushima Daiichi nuclear disaster radioactive cesium concentrations of 110 becquerels per kilogram were found in silver crucian carp fish caught in the Tone River in April 2012. The river is 180 kilometres (110 mi) from the Fukushima Daiichi Plant. Six fishery cooperatives and 10 towns along the river were asked to stop all shipments of fish caught in the Tone.[5] 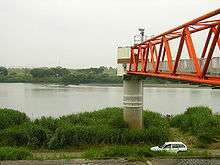 The Tone River was an indispensable inland water link between the capitol at Edo, and later Tokyo, to the Pacific Ocean. It carried not only local products like soy sauce from Choshi, but also products from the Tohoku region, in order to save time and to avoid risk in the open sea. With the advent of the railway in the 19th century major shipping on the Tone quickly declined, and inland ports such as Noda, Sekiyado, now part of Noda, Nagareyama, and Sawara, now part of Katori diminished in importance.[2] Today the river has several dams that supply water for more than 30 million inhabitants of metropolitan Tokyo and large-scale industrial areas such as the Keiyō Industrial Zone.

The Minakami onsen area in Gunma Prefecture is near the source for the Tone River and during the Spring snow melt period, April - June, the river provides consistent grade 4 rapids (on the International Scale of River Difficulty) over a 12 kilometers (7.5 mi) stretch. The river provides some of the best white water rafting and kayaking in Japan. The snow melt swells the river to grade 4 in spring; in the summer it is a gentle grade 2. The Momijikyo section has 7 grade 3-4 rapids for 1 kilometer (0.62 mi) and is 12 kilometers (7.5 mi) long in total.[6]