The 50th largest island by area in the world, Shikoku is smaller than Sardinia and Bananal, but larger than Halmahera and Seram. By population, it ranks 23rd, having fewer inhabitants than Sicily or Singapore, but more than Puerto Rico or Negros.

Mountains running east and west divide Shikoku into a narrow northern subregion, fronting on the Inland Sea, and a southern part facing the Pacific Ocean. Most of the 4.5 million inhabitants live in the north, and all but one of the island's few larger cites are located there. Mount Ishizuchi (石鎚山) in Ehime at 1,982 m (6,503 ft) is the highest mountain on the island. Industry is moderately well developed and includes the processing of ores from the important Besshi copper mine. Land is used intensively. Wide alluvial areas, especially in the eastern part of the zone, are planted with rice and subsequently are double cropped with winter wheat and barley. Fruit is grown throughout the northern area in great variety, including citrus fruits, persimmons, peaches, and grapes. Because of wheat production Sanuki udon (讃岐うどん) became an important part of the diet in Kagawa Prefecture (former Sanuki Province) in the Edo period. 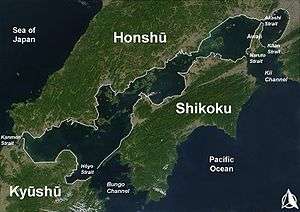 Shikoku in relation to the Inland Sea and Honshu

The larger southern area of Shikoku is mountainous and sparsely populated. The only significant lowland is a small alluvial plain at Kōchi, the prefectural capital. The area's mild winters stimulated some truck farming, specializing in growing out-of-season vegetables under plastic covering. Two crops of rice can be cultivated annually in the southern area. The pulp and paper industry took advantage of the abundant forests and hydroelectric power.

The major river in Shikoku is the Yoshino River. It runs 196 km (121.8 mi) from its source close to Mount Ishizuchi, flowing basically west to east across the northern boundaries of Kōchi and Tokushima Prefectures, reaching the sea at the city of Tokushima. The Yoshino is famous for Japan's best white-water rafting, with trips going along the Oboke Koboke sections of the river.

Shikoku has four important capes. Gamōda in Anan, Tokushima is the easternmost point on the island, and Sada in Ikata, Ehime the westernmost. Muroto in Muroto, Kōchi and Ashizuri, the southern extreme of Shikoku, in Tosashimizu, Kōchi, jut into the Pacific Ocean. The island's northernmost point is in Takamatsu, Kagawa.

Unlike the other three major islands of Japan, Shikoku has no volcanoes.[3] 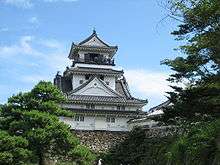 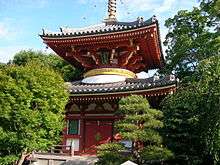 Shikoku is connected to Honshu by three expressways, which together form the Honshū–Shikoku Bridge Project.

The eastern gateway to Shikoku, Naruto in Tokushima Prefecture has been linked to the Kobe-Awaji-Naruto Expressway since 1998. This line connects Shikoku to the Kansai area which has a large population, including the large conurbations of Osaka, Kyoto, and Kobe. Therefore, the Kobe-Awaji-Naruto Expressway carries a large traffic volume. Many highway buses are operated between Kansai and Tokushima Prefecture.

The central part of Shikoku is connected to Honshu by ferry, air, and – since 1988 – by the Great Seto Bridge network. Until completion of the bridges, the region was isolated from the rest of Japan. The freer movement between Honshuū and Shikoku was expected to promote economic development on both sides of the bridges, which has not materialized yet.

Within the island, a web of national highways connects the major population centers. These include Routes 11, 32, 33, 55, and 56.

The Shikoku Railway Company (JR Shikoku) serves the island and connects to Honshu via the Great Seto Bridge. JR lines include:

Private railway lines operate in each of the four prefectures on Shikoku.

Shikoku lacks a full international airport but has four regional/domestic airports (Tokushima Airport, Takamatsu Airport, Kōchi Ryōma Airport and Matsuyama Airport). All of these airports have flights to Tokyo and other major Japanese cities such as Osaka, Nagoya, Sapporo, and Fukuoka. International flights to Seoul, South Korea are serviced by Asiana Airlines from Matsuyama and Takamatsu. There are periodic international charter flights as well.

Ferries link Shikoku to destinations including Honshu, Kyūshu, and islands around Shikoku.

Shikoku is also famous for its 88-temple pilgrimage of temples associated with the priest Kūkai. Most modern-day pilgrims travel by bus, rarely choosing the old-fashioned method of going by foot. They are seen wearing white jackets emblazoned with the characters reading dōgyō ninin meaning "two traveling together".

Tokushima Prefecture also has its annual Awa Odori running in August at the time of the Obon festival, which attracts thousands of tourists each year from all over Japan and from abroad.

Kōchi Prefecture is home to the first annual Yosakoi festival. The largest festival in Kōchi, it takes place in August every year and attracts dancers and tourists from all over Japan.

One of the major foods of Shikoku is udon.[4]Udon is often served hot as a noodle soup in its simplest form, as kake udon, in a mildly flavoured broth called kakejiru,which is made of dashi, soy sauce (shōyu), and mirin. It is usually topped with thinly chopped scallions. Other common toppings include tempura, often prawn or kakiage (a type of mixed tempura fritter), or aburaage, a type of deep-fried tofu pockets seasoned with sugar, mirin, and soy sauce. A thin slice of kamaboko, a halfmoon-shaped fish cake, is often added. Shichimi can be added to taste. Another is Kōchi's signature dish, seared bonito.

The warm climate of Shikoku lends itself to the cultivation of citrus fruits. As a result, yuzu, mikan and other citrus fruits are plentiful on Shikoku and have become synonymous with the regions they are grown in.

Historically no Shikoku-based sports team has competed in the top Japanese division of baseball, football (soccer) or even rugby union. Currently the major teams competing in Shikoku's major cities include: