For other uses, see Zmaj (disambiguation). 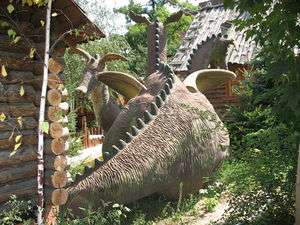 In Slavic mythology, the word “zmey” (Bulgarian and Russian: змей, Macedonian: змеj) and its cognates zmiy (Polish: żmij, Ukrainian: змій) and zmaj (Serbian and Bosnian: змај, Croatian, Slovene: zmaj), are used to describe a dragon. These words are masculine forms of the Slavic word for "snake", which are normally feminine (like Russian zmeya).

In Romania, there is a similar figure, derived from the Slavic dragon and named zmeu. In Polish and Belarusian folklore, as well as in the other Slavic folklore, a dragon is also called smok (смок), cmok (цмок).

Although quite similar to other European dragons, Slavic dragons have their peculiarities. 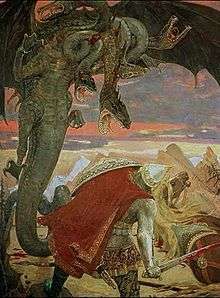 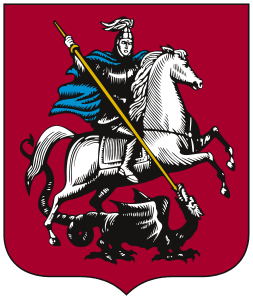 Coat of arms of Moscow

In Russia and Ukraine, a particular dragon-like creature, Zmey Gorynych (Russian: “Змей Горыныч” or Ukrainian: “Змій Горинич”), has three heads, is green, walks on two back paws, has small front paws, and spits fire. According to one bylina, Zmey Gorynych was the dragon killed by Dobrynya Nikitich.

Some Russian dragons (such as Tugarin Zmeyevich) symbolize the Mongols and other steppe peoples. Accordingly, St George (symbolizing Christianity) killing the Dragon (symbolizing Satan) is represented on the coat of arms of Moscow. Some prehistoric structures, notably the Serpent's Wall near Kiev, have been associated with dragons as symbols of foreign peoples.

Some Russian dragons have heads that grow back if every single head isn't cut off or the headless neck isn't covered immediately in ash or burnt. 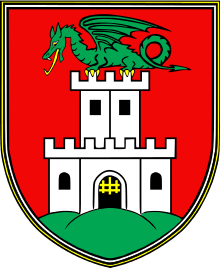 Coats of arms of Ljubljana

In Bulgaria, Macedonia, Croatia, Bosnia and Herzegovina, Serbia and Montenegro, there is a division between two types of dragon-like creatures: zmaj/zmej and aždaja/hala/ ala.

In Bulgaria, as well as Macedonia, there is a third type of a dragon-like creature called lamya. For instance, a Bulgarian legend tells how a hero called Mavrud cut off the heads of a hydra-like monster called Lamya. The story seems to symbolise the pruning of grape vines, and there is a popular Bulgarian grape variety named Mavrud.