Recoba was equally comfortable playing either as a forward or as an attacking midfielder.[1] He won 69 caps for the Uruguay national team between 1995 and 2007, participating at the 2002 World Cup and two Copa América tournaments.

Recoba started his career with Uruguay's Danubio. After several years there in the youth teams, he appeared on the first team at just 17 years old and played seasons 1994 and 1995 where he captured everyone's attention with his marvelous left foot. For the 1996–97 season he was transferred to Club Nacional de Futbol. The following season, he was sold to Internazionale.

Recoba made his debut for Internazionale on the same day as Ronaldo (31 August 1997), against Brescia in San Siro, scoring two goals in the last ten minutes of the match: one, a powerful 30-yard shot that flew past the keeper, the next, a free kick into the top corner after a Cristiano Doni foul. The goals allowed Internazionale to come back and win the match 2–1. In the same season, he scored a lob from only a short distance into the opponent's half.

After two seasons with Internazionale, he was eventually loaned out to relegation-battling Venezia.[2] It was there that he proved he could play at the highest level, as he was involved in the majority of the goals that the Venice side scored during his time there; he scored 11 times and made 9 assists in 19 matches. His efforts helped Venezia escape relegation that season. 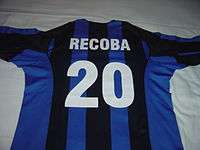 After his tenure at Venezia, which lasted less than one season, Recoba returned to Inter. In January 2001, he renewed his contract with the club until June 30, 2006. But during the same month he faced problems with a fake passport, losing the Italian nationality he received in 1999. He was punished with a one-year ban, which was later reduced to four months on appeal.[3]

Recoba has had other notable performances for Internazionale, an example being the 2004–05 Serie A match against Sampdoria on January 9, 2005 in which he entered the game as a 32nd-minute substitute for Adriano. In the 42nd minute of the second half with Sampdoria leading 2–0, he hit the post. He then fed the ball to Obafemi Martins who scored to bring Internazionale back into the game; this was followed three minutes later by an equaliser from Christian Vieri, and in the last minute of stoppage time, Recoba scored Internazionale's third goal in six minutes to snatch a 3–2 win.[4]

On March 16, 2007 Recoba confirmed to SKY Italia that he wanted to leave the team at the end of the 2006–07 season citing lack of appearances with the first team. Though he did score 1 goal for the team including a goal direct from a corner [5] He was initially linked with Internazionale's scudetto rivals A.S. Roma after he claimed that if the opportunity arose and Inter president Massimo Moratti approved he would join the capital club immediately.[6] On August 31, 2007 he was loaned to fellow Serie A club Torino F.C. where he rejoined Walter Novellino, his previous boss at Venezia.[7] He has played for Italian champions Internazionale in the Italian Serie A for ten seasons from 1997.

Recoba scored his first goal for the club in the second match of the season, a 1–1 draw with Palermo, after a good combination between himself and Alessandro Rosina.[8] On December 19, 2007 Recoba gave a top-class performance against A.S. Roma in the Coppa Italia, scoring two excellent goals in Torino's 3–1 win.[9] However, his performances have been disappointing due to injuries and lack of playing time; he has not made the expected impact despite a good start and finished the season out of the starting formation.[10]

He signed for Panionios of the Greek Super League on September 5, 2008, joining former Inter team-mate and close friend Lampros Choutos as well as Uruguay national team player Fabián Estoyanoff. He made his debut in a 2–1 win against Aris on October 18. He proved his quality by assisting both goals for his teammates Maniatis and Gonzaga.[11] In his next match, he inspired Panionios to a 5–2 away win against Ergotelis where he scored two goals. He finished the season with five goals and seven assists, though had several injury problems.

On June 9, 2009 Recoba agreed to remain at Panionios for the following season, thus fulfilling the original duration of his contract despite the fact that Choutos had left the team after having consecutive arguments with his former coach Ewald Lienen.

After being constantly injured and because of his very high wages, Recoba agreed to mutually rescind his contract on December 16, 2009. The club indicated that the meeting was friendly and they were honoured by his association with their club despite his injury-riddled spell.[12][13] 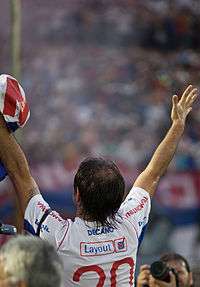 After nine days without a club it was announced on December 24, 2009 that he would sign with Danubio F.C.[14] The former Uruguayan international had already played for Danubio from 1993 to 1995.

He signed for Nacional in July 2011. He appeared in many games coming on from the bench, but still proved to be a key player for the team winning the Torneo Apertura, both assisting and scoring. Most notably, he scored the second goal in the clásico against Peñarol (the game ended 2–1) by taking a penalty kick during stoppage time, thus allowing Nacional to pass Peñarol in the tournament's table, and he also scored the only goal in the last match against Liverpool.

During the Torneo Clausura he was able to start more games, and proved as important as in the Apertura, scoring the third and definitive goal of that tournament's clásico (ending 3–2).

He scored the only goal in the final game of 2011–12 Campeonato Uruguayo against Defensor Sporting Club on June 16, 2012.

During the Uruguayan Clásico on 9 November 2014, Recoba scored a 30-yard free-kick in the 5th minute of stoppage time to win the game for Nacional.[15] 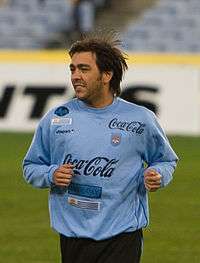 Recoba warming up for Uruguay in 2007

Recoba made his debut for Uruguay on January 18, 1995 in a friendly match against Spain (2–2) in the Estadio Riazor in A Coruña, replacing Enzo Francescoli in the 65th minute.[16] He played at the 2002 FIFA World Cup. His only goal at the tournament came against Senegal in Uruguay's final group game, but it was not enough as the match finished in a 3–3 draw and eliminated Uruguay in the first round.

In September 2005, he scored the winning goal against Argentina in a World Cup qualifier. This helped Uruguay qualify as South America's fifth-placed team and put them in position to play for the intercontinental playoff against Oceania champions Australia. However, Uruguay lost 4–2 in a penalty shootout after a draw in aggregate score. Recoba who was substituted in the second leg of the playoff by Marcelo Zalayeta after 73 minutes[17] was interviewed for the Australian documentary "November 16" in 2015 and indicated his regret at the decision to replace him saying "I was OK. I had the will to keep going. ... I was disappointed to come off in a game like that."[18]

Despite a lack of appearances for Internazionale, he was again picked for the Uruguay national team. This allowed Recoba to play in most of the Uruguay matches for which he was fit. He scored his 12th international goal in a 2–1 victory on June 2, 2007 in a friendly match against Australia. Recoba also played for Uruguay in Copa América 2007, in which they finished fourth. In total, he earned 69 international caps.

A quick, technically gifted, and creative offensive midfield playmaker, who was capable both of scoring and creating goals, Recoba's main strengths were his dribbling skills, ball control, pace, his brilliant long passing and crossing ability, and his powerful and accurate striking ability with his left-foot from outside the area.[19] He was a set-piece, penalty kick, and corner-kick specialist, renowned for his curling free-kicks, and has scored goals of great quality, examples of which were his two goals on his debut with Inter.[19] Recoba was capable of playing in several offensive positions, and has been used as an attacking midfielder, as a supporting striker, and as a winger. He was also for a period the highest paid football player in the world.[19][20][21] Despite his talent, Recoba was often injury prone throughout his career,[22][23] and was also criticised for his poor work-rate and inconsistency, which has led pundits and managers to accuse him of not fulfilling his potential.[19][24][25][26]