The 100 metres hurdles, or 100-meter hurdles, is a track and field event run mainly by women (the male counterpart is the 110 metres hurdles). For the race, ten hurdles of a height of 83.8 centimetres (33.0 in) are placed along a straight course of 100 metres (109.36 yd). The first hurdle is placed after a run-up of 13 metres from the starting line. The next 9 hurdles are set at a distance of 8.5 metres from each other, and the home stretch from the last hurdle to the finish line is 10.5 metres long. The hurdles are set up so that they will fall over if bumped into by the runner, but weighted so this is disadvantageous. Fallen hurdles do not count against runners provided that they do not run into them on purpose. Like the 100 metres sprint, the 100 m hurdles begins with athletes in starting blocks.

The fastest 100 m hurdlers run the distance in a time of around 12.5 seconds. The world record set by Kendra Harrison stands at 12.20 seconds. 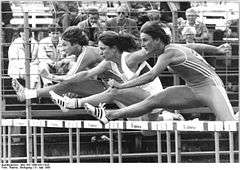 The Olympic Games had included the 80 m hurdles in the program from 1932 to 1968. Starting with the 1972 Summer Olympics the women's race was lengthened to 100 m hurdles.

Just like with the men's races, until 1935 no more than three hurdles could be knocked over (or the runner was disqualified) and records were only officially registered if the runner had cleared all her hurdles clean. In 1935, this rule was abandoned, and L-shaped hurdles were introduced that fell over forward easily and greatly reduced the risk of injury to the runner. Hurdles are weighted, so when properly set for the height (for women, closer to the fulcrum of the "L"), they serve as a consistent disadvantage to making contact with the barrier.

During the 1960s some experimental races were run over a distance of 100 metres using hurdles with a height of 76.2 cm. During the 1968 Summer Olympics a decision was made to introduce the 100 m hurdles using hurdles with a height of 84 cm and the first international event in the 100 m hurdles occurred at the European Athletics Championships, which were won by Karin Balzer, GDR. The modern 100 m race has an extra 2 hurdles compared to the 80 m race, which are higher and spaced slightly further apart. The home stretch is shorter by 1.5 m.

A version of the 100 metres hurdles is also used for 50- to 59-year-old men in Masters athletics. They run the same spacing as women, which coordinates with existing markings on most tracks, but run over 36-inch (0.915 m) hurdles. In the 60-69 age range, the spacings are changed. Women over age 40, men over age 70 run 80 metre versions with different heights and spacings.[1][2]

Standings as of July 2016 (wind speed, in meters per second, shown in parentheses):

Below is a list of all other legal times inside 12.35.

Any performance with a following wind of more than 2.0 metres per second does not count for record purposes. Below is a list of all wind-assisted times equal or superior to 12.37.