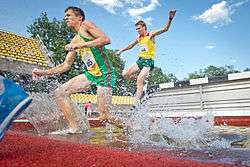 Steeplechase at the 2014 Lithuanian Championships in Athletics 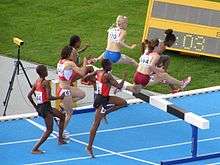 Women's steeplechase at the 2008 World Junior Championships, in Bydgoszcz

The event originated in Ireland. Horses and riders raced from one town's steeple to the next. The steeples were used as markers due to their visibility over long distances. Along the way runners inevitably had to jump streams and low stone walls separating estates. The modern athletics event originates from a two-mile (3.2 km) cross country steeplechase that formed part of the University of Oxford sports (in which many of the modern athletics events were founded) in 1860. It was replaced in 1865 by an event over barriers on a flat field, which became the modern steeplechase. It has been an Olympic event since the inception of the modern Olympics, though with varying lengths. Since the 1968 Summer Olympics, steeplechase in the Olympics has been dominated by Kenyan athletes, including the current gold medal streak since 1984 and a clean sweep of the medals at the 1992 and 2004 Games.

Other divisions including masters athletics and youth athletics run 2,000 metres distances. The format for a 2,000 metre steeplechase removes the first two barriers of the first lap.[1]

The steeplechase at the 1932 Olympics was run over approximately 3460 metres due to a lap scoring error.