For other types of sprint, see Sprint (disambiguation). 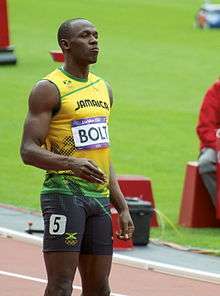 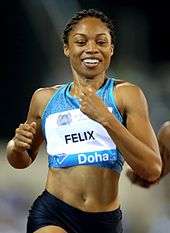 Sprinting is running over a short distance in a limited period of time. It is used in many sports that incorporate running, typically as a way of quickly reaching a target or goal, or avoiding or catching an opponent. Human physiology dictates that a runner's near-top speed cannot be maintained for more than 30–35 seconds due to the depletion of phosphocreatine stores in muscles, and perhaps secondarily to excessive metabolic acidosis as a result of anaerobic glycolysis.[1]

In athletics and track and field, sprints (or dashes) are races over short distances. They are among the oldest running competitions. The first 13 editions of the Ancient Olympic Games featured only one event—the stadion race, which was a race from one end of the stadium to the other.[2] There are three sprinting events which are currently held at the Summer Olympics and outdoor World Championships: the 100 metres, 200 metres, and 400 metres. These events have their roots in races of imperial measurements which were later altered to metric: the 100 m evolved from the 100 yard dash,[3] the 200 m distance came from the furlong (or  1⁄8 mile),[4] and the 400 m was the successor to the 440 yard dash or quarter-mile race.[1]

At the professional level, sprinters begin the race by assuming a crouching position in the starting blocks before leaning forward and gradually moving into an upright position as the race progresses and momentum is gained. The set position differs depending on the start. Body alignment is of key importance in producing the optimal amount of force. Ideally the athlete should begin in a 4-point stance and push off using both legs for maximum force production.[5] Athletes remain in the same lane on the running track throughout all sprinting events,[1] with the sole exception of the 400 m indoors. Races up to 100 m are largely focused upon acceleration to an athlete's maximum speed.[5] All sprints beyond this distance increasingly incorporate an element of endurance.[6]

The 60 metres is a common indoor event and it is an indoor world championship event. Less common events include the 50 metres, 55 metres, 300 metres, and 500 metres which are used in some high school and collegiate competitions in the United States.

Biological factors that determine a sprinter's potential include:

Note: Indoor distances are less standardized as many facilities run shorter or occasionally longer distances depending on available space. 60m is the championship distance.

The fastest time by a woman is 1 minute 22.63 seconds, set at altitude by Ana Quirot at Guadalajara in 1997.

Jeremy Wariner beginning a race from the starting blocks

Starting blocks are used for all competition sprint (up to and including 400 m) and relay events (first leg only, up to 4x400 m).[17] The starting blocks consist of two adjustable footplates attached to a rigid frame. Races commence with the firing of the starter's gun.[17] The starting commands are "On your marks" and "Set".[17] Once all athletes are in the set position, the starter's gun is fired, officially starting the race. For the 100 m, all competitors are lined up side-by-side. For the 200 m, 300 m and 400 m, which involve curves, runners are staggered for the start. 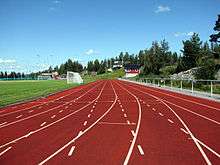 Sprint lanes in Örnsköldsvik, Sweden as seen from the 100 m starting point

According to the IAAF rules, "An athlete, after assuming a full and final set position, shall not commence his starting motion until after receiving the report of the gun, or approved starting apparatus. If, in the judgement of the Starter or Recallers, he does so any earlier, it shall be deemed a false start."[17]

The 100 m Olympic Gold and Silver medallist Linford Christie of Great Britain famously had frequent false starts that were marginally below the legal reaction time of 0.1 seconds. Christie and his coach, Ron Roddan, both claimed that the false starts were due to Christie's exceptional reaction times being under the legal time. His frequent false starting eventually led to his disqualification from the 1996 Summer Olympics 100 m final in Atlanta, Georgia, USA due to a second false start by Christie. Since January 2010, under IAAF rules, a single false start by an athlete results in disqualification. In 2012, a new development to the false start rule was added. Because certain athletes could be disqualified for twitching in the starting blocks but some athletes could make a twitch without the starter noticing and disqualifying the athlete, it was decided that twitching in the starting block while being in the 'set' position would only carry a maximum penalty of a yellow card or a warning. In order to instantly be disqualified for a false start, an athlete's hands must leave the track or their feet must leave the starting blocks, while the athlete is in their final 'set' position. 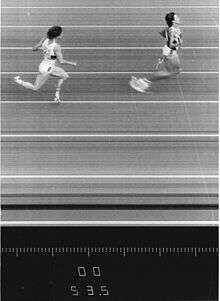 A photo finish from the 1987 East German athletics championships

For all Olympic sprint events, runners must remain within their pre-assigned lanes, which measure 1.22 metres (4 feet) wide, from start to finish.[18] The lanes can be numbered 1 through 8, 9, or rarely 10, starting with the inside lane. Any athlete who runs outside the assigned lane to gain an advantage is subject to disqualification. If the athlete is forced to run outside of his or her lane by another person, and no material advantage is gained, there will be no disqualification. Also, a runner who strays from his or her lane in the straightaway, or crosses the outer line of his or her lane on the bend, and gains no advantage by it, will not be disqualified as long as no other runner is obstructed.

The first athlete whose torso reaches the vertical plane of the closest edge of the finish line is the winner. To ensure that the sprinter's torso triggers the timing impulse at the finish line rather than an arm, foot, or other body part, a double Photocell is commonly used. Times are only recorded by an electronic timing system when both of these Photocells are simultaneously blocked. Photo finish systems are also used at some track and field events.