In mathematics, the 11-cell (or hendecachoron) is a self-dual abstract regular 4-polytope (four-dimensional polytope). Its 11 cells are hemi-icosahedral. It has 11 vertices, 55 edges and 55 faces. Its symmetry group is the projective special linear group L2(11), so it has 660 symmetries. It has Schläfli symbol {3,5,3}.

It was discovered in 1977 by Branko Grünbaum, who constructed it by pasting hemi-icosahedra together, three at each edge, until the shape closed up. It was independently discovered by H. S. M. Coxeter in 1984, who studied its structure and symmetry in greater depth. 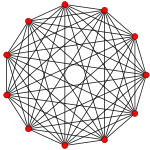 The abstract 11-cell contains the same number of vertices and edges as the 10-dimensional 10-simplex, and contains 1/3 of its 165 faces. Thus it can be drawn as a regular figure in 11-space, although then its hemi-icosahedral cells are skew; that is, each cell is not contained within a flat 3-dimensional subspace.