In geometry, a 4-polytope (sometimes also called a polychoron, polycell, or polyhedroid) is a four-dimensional polytope.[1][2] It is a connected and closed figure, composed of lower-dimensional polytopal elements: vertices, edges, faces (polygons), and cells (polyhedra). Each face is shared by exactly two cells.

Topologically 4-polytopes are closely related to the uniform honeycombs, such as the cubic honeycomb, which tessellate 3-space; similarly the 3D cube is related to the infinite 2D square tiling. Convex 4-polytopes can be cut and unfolded as nets in 3-space.

A 4-polytope is a closed four-dimensional figure. It comprises vertices (corner points), edges, faces and cells. A cell is the three-dimensional analogue of a face, and is therefore a polyhedron. Each face must join exactly two cells, analogous to the way in which each edge of a polyhedron joins just two faces. Like any polytope, the elements of a 4-polytope cannot be subdivided into two or more sets which are also 4-polytopes, i.e. it is not a compound.

The most familiar 4-polytope is the tesseract or hypercube, the 4D analogue of the cube.

4-polytopes cannot be seen in three-dimensional space due to their extra dimension. Several techniques are used to help visualise them.

Orthogonal projections can be used to show various symmetry orientations of a 4-polytope. They can be drawn in 2D as vertex-edge graphs, and can be shown in 3D with solid faces as visible projective envelopes. 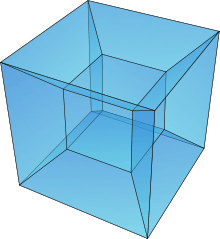 The tesseract as a Schlegel diagram

The topology of any given 4-polytope is defined by its Betti numbers and torsion coefficients.[3]

Similarly, the notion of orientability of a polyhedron is insufficient to characterise the surface twistings of toroidal 4-polytopes, and this led to the use of torsion coefficients.[3]

The following lists the various categories of 4-polytopes classified according to the criteria above: 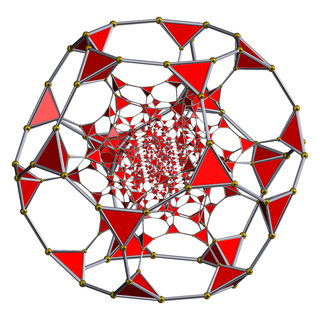 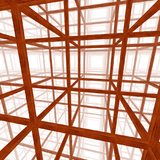 The regular cubic honeycomb is the only infinite regular 4-polytope in Euclidean 3-dimensional space.

The 11-cell is an abstract regular 4-polytope, existing in the real projective plane, it can be seen by presenting its 11 hemi-icosahedral vertices and cells by index and color.