West Sumatra (Indonesian: Sumatera Barat, abbreviated to Sumbar, Jawi: سومترا بارت‎, Minangkabau: Sumatera Baraik) is a province of Indonesia. It lies on the west coast of the island of Sumatra. The latest official estimate for January 2014 shows a population of 5,098,790. West Sumatra is sub-divided into 12 regencies and seven cities. It has relatively more cities than other provinces in Indonesia, except Java province.[2] Its capital is Padang.

It borders the provinces of North Sumatra (Sumatera Utara) to the north, Riau and Jambi to the east, and Bengkulu to the southeast. It includes the Mentawai Islands off the coast.

The history of West Sumatra is related to the history of the Minangkabau people. Archaeological evidence indicates that the area surrounding the Limapuluh Koto regency forms the first area inhabited by the Minangkabau. Limapuluh Koto regency covers a number of large rivers which meet at the eastern part of the Sumatran coastline and provided sailing transportation until the end of the last century. The Minangkabau ancestors were believed to have arrived via this route. They sailed from Asia (Indo-China) via the South China Sea, crossing the Malacca Strait and later settled along the Kampar, Siak and Indragiri (or Kuantan) rivers. Some lived and developed their culture and traits around the Limapuluh Koto regency.

The first westerner to reach West Sumatra was the French explorer Jean Parmentier in 1529. However, the westerners who came for economic and political reasons were the Dutch. The Dutch commercial fleet was seen along the southern coast of West Sumatra between 1595 to 1598. Apart from the Dutch, other European nationalities also came to the region such as the Portuguese and the English.

The integration with migrants in the ensuing periods introduced cultural changes and an increase in population. Their settlement area gradually became diminished and eventually they spread to other parts of West Sumatra. A portion of them went to the Agam regency while others went to the now Tanah Datar regency. From those areas onward, further spread of the population occurred north of the Agam regency, in particular, the Lubuk Sikaping. Rao and Ophir districts. Most of them settled in the western area such as the coastline and some in the southern parts in Solok, Selayo and the surrounding areas of Muara and Sijunjung.

The history of the West Sumatra Province became more accessible at the time of the rule by Adityawarman. This ruler left considerable amount of evidence of himself, although he did not proclaim that he was the Minangkabau King. Adityawarman ruled Pagaruyung, a region believed by the Minangkabau to be the center of its culture. Adityawarman was the most important figure in Minangkabau history. Apart from introducing a government system by a ruling monarch, he also contributed significantly to the Minangkabau world. His most important contribution was the spread of Buddhism. This religion had a very strong influence in the Minangkabau life. The evidence of such influence found in West Sumatra today includes names such as Saruaso, Pariangan, Padang Barhalo, Candi, Biaro, Sumpur and Selo.

Since the death of Adityawarman in the middle of the 17th century the history of West Sumatra seems more complex. During that time, the connection of West Sumatra with the outside world, in particular, Aceh, became more intense. West Sumatra at that time was the political dominion of Aceh which also monopolized the economy of the area. Coupled with the intensive connection Islam entered into West Sumatra. The new faith eventually became fundamental to the social and cultural way of life in the region. Sheik Burhanuddin was regarded as the first preacher of Islam in West Sumatra. Prior to expanding the faith in the region, he was studying in Aceh.

The dominating influence of Aceh's politics and economy did not make the people of western coast of Sumatra happy. Ultimately, the growing dissatisfaction gave way to the acceptance of the Dutch although the presence of them also opened up a new chapter in the history of West Sumatra. The arrival of the Dutch in the region caused them to enter the era of colonialism in the very of essence of its meaning, which cause another discontent in the region, particularly among the Islamists, which eventually led into an armed rebellion against the Dutch. 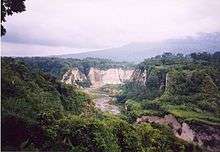 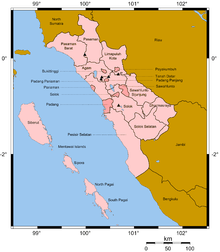 West Sumatra Province is subdivided into twelve regencies and seven autonomous cities, which lie outside any regency. The regencies and cities are listed below with their areas and their populations at the 2010 Census and at the most recent (January 2014) estimates.

As a new regency, Dharmasraya got the highest score (59.43) from a possible 100 among other new regencies.[4]

Before the reforms of 1999 and the implementation of regional autonomy in 2001, the lowest local government unit under the district administrations was the Javanese model of the village, the desa. Under regional autonomy, the traditional Minangkabau nagari, which are larger than villages elsewhere in Indonesia, have been reintroduced in place of the desa.[5] 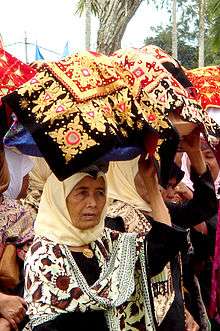 The Minangkabau people inhabit the area of West Sumatra province on the island Sumatra. They speak Minangkabau language. They are predominantly Muslim, and they have a reputation as traders, intelectuals as well as politically savvy people who have successfully exported their culture, language, cuisine and beliefs throughout Indonesia.[7]

Mentawaians live on the Mentawai Islands, off the western coast of Sumatra, that are also part of the province. They speak Mentawai languages, which are not intelligible with either Indonesian nor Minangkabau. Small minority of the Mentawais are Christians nowadays.

West Sumatra was once a center of education on the island of Sumatra, especially in the education of Islam by mosque as the main base place.[8] During the colonial rule Islamic schools of education are so marginalized in comparison with the model Dutch East Indies which is considered more modern.[9]

West Sumatra is home to several universities, the most notable of which is Andalas University.

West Sumatra is also home of several professional soccer clubs. The most popular of them is Semen Padang, which regularly plays its matches in Haji Agus Salim Stadium, the biggest stadium in West Sumatra. Tour de Singkarak, an annual road cycling race since 2009 is an official tournament series of Union Cycliste International (UCI). It covers more than 700 kilometres, from Padang passing around lake Singkarak and runs through inland West Sumatran cities. This sporting event is also meant to promote West Sumatra tourism.

A train with Lake Singkarak as the background.

The province is served by Minangkabau International Airport, opened in July 2005, 23 km north-west of Padang in Ketaping, Padang Pariaman regency. The airport has direct international services to Kuala Lumpur in Malaysia, as well as servicing most large cities in Indonesia.

Significant roads include the Trans-Sumatran Highway which runs the length of the province, heading north-west towards Medan and south-east towards Jakarta, the road between Padang and Bukittinggi, and the road between Bukittinggi and Pekanbaru. The provincial government plans to upgrade the later two roads over the next few years to improve traffic flows .

In January 2012, the Kelok Sembilan 970-meter long overpass was ready to be opened to the public and was in the trial stage which will be opened for vehicles in April 2012. Kelok Sembilan means 9 sharp turns is an area through which a road with tight bends passes through hilly terrain in the middle of a valley, a nice scenery, but cause congestion.[10] After the overpass opens, the old Kelok Sembilan road is still open for tourists.

Regular bus services run between Padang and Bukittinggi, and the other major cities of Sumatra. Other public transport options within the province include train, oplet, taxi and horse cart (bendi).

Teluk Bayur port in Padang is the largest and busiest on the western coast of Sumatra. It is used for exporting goods from West Sumatra as well as from some areas of the neighboring provinces.

Railway services run between Padang and Pariaman city on weekends only and make a good day trip.

The prime tourist attractions of West Sumatra are the natural environment, and the culture and history of the Minangkabau and Mentawai people.

Natural attractions of the mainland include the tropical forests, mountains, volcanos, lakes, valleys, rivers & waterfalls in the highlands, the fauna and flora, and the beaches around Padang. Many areas are protected as part of national parks and reserves. The city of Bukittinggi is a popular central location in the highlands from which to explore the culture and history of the Minangkabau people, including architecture, crafts, dances, music and food. There are a number of museums and cultural centers. Pariaman has one of the famous festivals, Tabuik. The Mentawai Islands are a popular destination for surfers and those looking to experience the culture and more primitive lifestyle of the Mentawai people. For developing West Sumatra tourism, in 2006 the government opened tourist train railway service run between Padang - Padang Panjang - Sawahlunto. The Tour de Singkarak international cycling race had boosted the number of the foreign tourists to West Sumatra.[11] The majority of the foreign tourists are Malaysians and Australian.

The favourite tourism places are :

The traditional dance is "Tari Piring" or Plate Dance which is originally came from Solok, West Sumatra.[13]