This article is about the cyclist Michał Kwiatkowski. For the singer, see Michal (singer).

Michał Kwiatkowski (Polish pronunciation: [ˈmixaw kfjatˈkɔfski], born 2 June 1990) is a Polish professional road bicycle racer for UCI ProTeam Team Sky.[3] Kwiatkowski is seen as a strong all rounder, with good sprinting, time-trialling and climbing abilities allowing him to win both stage races and one day classics. His talent was shown in early career winning the World Junior Time Trial. In 2014, Kwiatkowski became the world champion of elite men's road race at the age of 24. He was also a member in the Omega Pharma-Quick-Step World Team Time Trial winning team in 2013.

Kwiatkowski is a double European champion (road race 2007, time trial 2008). In 2009 he became national road champion in the under-23 category. He also won a stage of the Tour de Slovaquie. He turned professional in 2010 with Caja Rural and in 2011 joined Team RadioShack, and placed third overall in the Driedaagse van West-Vlaanderen, the Three Days of De Panne and the Tour du Poitou-Charentes.

Kwiatkowski moved to Omega Pharma–Quick-Step for the 2012 season. He impressed in his first year with the team, winning the prologue of Driedaagse van West-Vlaanderen. He also finished second overall in his home race, the Tour de Pologne, and eighth overall in the Eneco Tour. 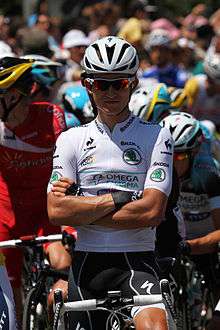 Kwiatkowski in the White Jersey at the 2013 Tour de France.

Kwiatkowski began the 2013 season in excellent form, placing second overall in the Volta ao Algarve. He then finished fourth overall in Tirreno-Adriatico, and won the young rider classification, after proving one of the strongest climber in the race. He finished fourth at the summit finish of Prati di Tivo to take the overall race lead from team-mate Mark Cavendish, before surrendering it the next day. Kwiatkowski then rode a strong classics campaign, placing fourth in the Amstel Gold Race and fifth in La Flèche Wallonne. In June, he won his senior National Road Race Championships for the first time.

Kwiatkowski's excellent form saw him selected to ride the Tour de France. He wore the white jersey – of young rider classification leader – in the first week after coming third on Stage 2 and fourth on Stage 3, both reduced bunch sprints. On Stage 7 he came in fourth again. On Stage 9 (a high mountain stage) he reached the podium once again. With a strong ITT he was able to regain the white jersey of the young rider classification on Stage 11, but lost the lead shortly after to Nairo Quintana.[4] Even though he lost the white jersey, he still managed to finish 11th in his Tour debut.[5]

In 2014, Kwiatkowski won the Italian Classic Strade Bianche. He followed a strong attack from Peter Sagan with 20 kilometers to go and the pair cooperated well until Kwiatkowski dropped Sagan on the final climb to Siena.[6] He placed on the third step of the podium in the Liège–Bastogne–Liège as well as in La Flèche Wallonne and fifth in Amstel Gold Race.

In September, he grabbed the leader's jersey of the Tour of Britain by winning the fourth Stage in a select group sprint of 6 riders.[7] Overall he placed second in the general classification and first in the points classification.[8] 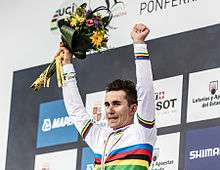 Later that same month he became the first Polish cyclist to win the UCI Road Race World Championship. Kwiatkowski made a solo attack about seven km from the finish line on a downhill section. Despite a late chase, he was able to hold the lead and coast across the finish line, winning the rainbow jersey.[9] After the race, Kwiatkowski posted his winning ride on Strava, which helped determine his statistics for the event. He climbed 5 106 meters and burned 6 338 kilocalories during the course of 6:29:45,[10] producing an average power of 240 watts with an average heartbeat of 148 beats per minute.[11] He rode his first race in the rainbow jersey at Il Lombardia and finished 77th.[12] 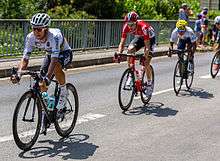 Kwiatkowski wearing the Rainbow Jersey at the 2015 Tour de France

Being reigning world champion, Kwiatkowski tended to start the 2015 year with a less aggressive approach than 2014 for the bigger race later on.[13] He used Volta ao Algarve and Paris–Nice as warm up races to prepare for the classics campaign, finishing second overall in both events. In April, Kwiatkowski earned a prestigious victory at the Amstel Gold Race. After the last climb of the Cauberg, he had to work to join a small group led by Philippe Gilbert. Before the finish line, a regrouping of about fifteen riders formed and Kwiatkowski outsprinted them to add the Dutch classic to his palmares.[14]

On 25 March 2016, Kwiatkowski won his first cobbled classic, E3 Harelbeke, by outsprinting Peter Sagan after the pair broke away from an elite group with 30km remaining.[17] He was named in the startlist for the 2016 Vuelta a España,[18] but he abandoned on stage 7.[19]