At the 2012 Summer Olympics, he won a silver medal in the road race. He became the first Colombian ever to make the podium of the Giro d'Italia, when he finished second behind Vincenzo Nibali in the 2013 edition of the race, having taken leadership of Team Sky following the abandonment of team captain Bradley Wiggins. He also won a mountain-top stage in that race with a solo breakway. The previous year, he had won the white jersey for best young rider, and a seventh-place finish overall. In the 2014 Giro d'Italia he finished second again in the general classification, this time behind countryman Nairo Quintana.

Urán was first introduced to the world of cycling at the age of 14 by his father, who was assassinated a few months later by one of the country's paramilitary terrorist groups.[3][4] Rigoberto had to take his place as a lottery seller to help his family and at the age of 16 he turned professional and moved to Medellín to ride for Orgullo Paisa, a Colombian cycling team.[5][6]

At the age of 19 he moved to Italy to ride for Team Tenax with his compatriot Marlon Pérez Arango. The following year he signed for Unibet.com and won a time trial at the Euskal Bizikleta that was stopped with some riders still left to go due to heavy rainfall and strong winds. He also won the eighth stage of the Tour de Suisse, getting away from a bunch of approximately 55 riders with 800 metres (2,600 ft) to go and holding onto the lead.[7] He also finished ninth overall of the race. At the 2007 Deutschland Tour he was in a breakaway with eventual stage winner Damiano Cunego when he flew down over a mountain stream and smashed into a retaining wall. He fractured both elbows and the right wrist.[8] 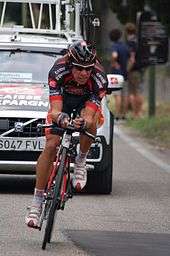 In 2008 he signed a contract with Caisse d'Epargne and went on to finish second at the Volta a Catalunya and third at the Giro di Lombardia, a prestigious one-day classic. At the 2008 Summer Olympic Games, Urán competed in the road race but he did not finish. In 2009 he finished fifth overall at the Tour de Romandie and rode his first the Tour de France and finished 52nd. In 2010 he rode the Giro d'Italia and finished 7th overall in the 2010 Tour de Suisse. He also rode the Vuelta a España but suffered a fall that ended his options of a high overall placing while being eighth overall.[9] 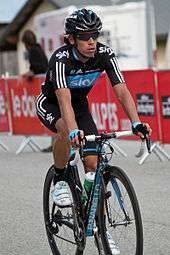 Uran riding for Sky at the 2011 Criterium du Dauphine

At the Tour de France, Urán became leader of Sky after Bradley Wiggins crashed out on Stage 7. He finished 5th on Stage 14, taking the best young rider's jersey and moving up to 11th overall in the process.[13] Uran lost the Maillot Blanc to Rein Taaramäe on Stage 18[14] after picking up an illness,[15] and eventually finished 24th overall.[16]

During the 2012 Volta a Catalunya, Uran claimed his first win for Sky on Stage 4 after winning a sprint from a 6-man breakaway which narrowly held off the chasing pack. Uran finished second on the following stage, and finished the race in fifth place overall.

At the 2012 Giro d'Italia he won the young rider classification and finished seventh overall after being in the lead group for most of the mountain stages. He did not have one result that stood out in the individual stages, but finished in the top ten of stages 10, 14, 17 (4th), 19 and 20, which were all crucial mountainous affairs. He finished 5 minutes and 57 seconds in arrears of the victor, Canadian Ryder Hesjedal of Garmin–Sharp.[17]

He took silver in the 2012 Summer Olympics road race after breaking away with Alexander Vinokourov with 8 km (5.0 mi) to cover. Approximately 200 meters from the arrival, and with the victory secured for one of the two men, Uran looked back, unwisely over his left shoulder (since Vinokourov was on his right) to see if the chasers were approaching to threaten their lead. Vinokourov then started his sprint, taking Uran by surprise. Uran reacted with a delay since he didn't see the move and could not close the gap as the Kazakh sailed to the finish line and the gold medal.[18][19] He rode the Vuelta a España in support of his leader Chris Froome, and finished in 29th position.[20] Later in the fall, competing in the Italian Classic Giro del Piemonte, Uran attacked in the final climb of the day, followed by Gorka Verdugo (Euskaltel–Euskadi). The pair agreed verbally to cooperate until the 500 meters mark, and Uran started his sprint with 300 meters to go, winning by six seconds over Luca Paolini of Team Katusha who was trying to come from behind.[21] A couple of days later, he grabbed the third place in the Monument of cycling Giro di Lombardia in difficult weather conditions (cold and rain). He crossed the line in Lecco as part of a small group of chasers who unsuccessfully tried to reel in Joaquim Rodríguez of the Team Katusha squad.[22]

Uran was selected for the 2013 Giro d'Italia, originally as one of Bradley Wiggins' mountain domestiques. Uran sat fifth overall after Sky won the team time trial on Stage 2, and moved up to third overall on the following stage. He moved up to second overall, behind Luca Paolini, on Stage 4, after Wiggins lost time behind a crash. However, on Stage 7, Uran was forced to wait for Wiggins after he struggled then crashed on wet descents, and dropped out of the top ten as a result. After the individual time trial on Stage 8, Uran sat tenth overall, 2 minutes and 49 seconds behind new leader Vincenzo Nibali. On Stage 10, the first mountain stage of the race, Uran launched an attack on the final climb, Altopiano del Montasio, and won the stage by 20 seconds from compatriot Carlos Betancur. Uran also moved up to third overall, 2 minutes and 4 seconds behind Nibali, and 1 second ahead of Wiggins. Wiggins withdrew due to illness after losing further time on Stage 12, leaving Uran as Sky's leader. Uran placed fifth on Stage 14 to maintain third place by a single second to Mauro Santambrogio, but solidified his position on Stage 16 as Santambrogio lost over two minutes. Uran came sixth in the mountain time trial on Stage 18 to reduce the gap to second placed Cadel Evans to just 12 seconds. On the final summit finish on Stage 20, Uran came third behind Nibali and Duarte to leapfrog Evans into second place. He safely negotiated the final stage to finish the Giro second overall, 4 minutes and 43 seconds behind Nibali, to take his first Grand Tour podium. 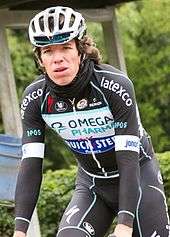 Uran started his 2014 season with another placing at the Tour of Oman where he finished 3rd. Though aiming for the Giro d'Italia he was quiet during the Tour de Romandie apart from finishing 4th in the penultimate time trial. A week later, he entered the Giro d'Italia leading Omega Pharma-Quick Step.

His first week at the Giro started well where he was placed 2nd behind race leader Cadel Evans. He would put a stunning time trial performance on stage 12 not only taking the stage win, but also taking the race lead. This made him the first Colombian ever to wear the Maglia Rosa. He then managed to keep a large margin of his lead on stages 14 and 15. However, on stage 16, he would lose his race lead to fellow Colombian Nairo Quintana controversially, after thinking the Stelvio descent was neutralized where Quintana went off and attacked. Though his team reacted to this in a negative way, Uran never reacted to it. Though he put a solid 3rd place in the stage 19 mountain time trial, his chances of winning neared zero after being 3 minutes behind Quintana at the end of stage 19. Uran finished strong on the Zonoclan, finishing with Quintana and gaining time over the rest of the GC contenders. Despite the controversy on the Stelvio descent, Uran seemed happy enough to finish second in the Giro.

After a nice start sitting 3rd overall, Uran slipped in the overall classification of the Vuelta a España, dropping out of contention as he suffered from asthmatic bronchitis. The team hoped Uran's condition would improve during the second rest day, but to no avail. He finally abandoned the race before Stage 17.[25]

In 2015, after a strong season start with a 3rd overall in Tirreno-Adriatico and 5th overall in Volta a Catalunya and Tour de Romandie, he had a discrete Giro, finishing a 14th position. Later that year, Uran won his first World Tour competition in the Grand Prix Cycliste de Québec.